Ask the comedians behind Future Science what their sketch comedy show is like, and they will each answer along the lines of “structured chaos.” 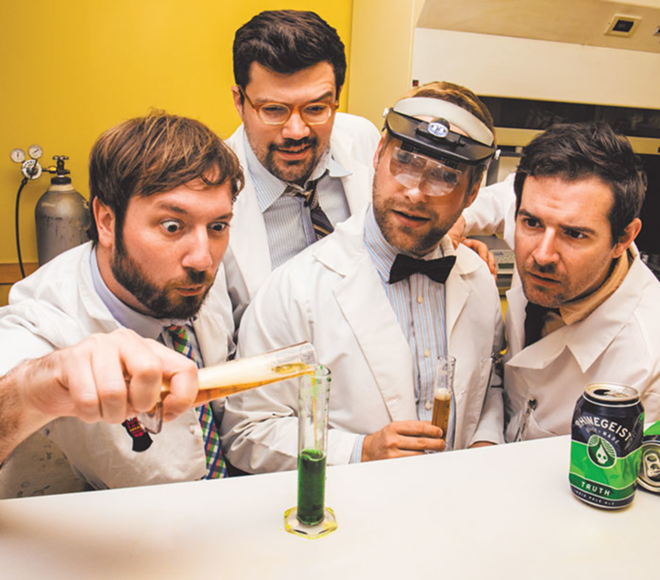 Ask the comedians behind Future Science what their sketch comedy show is like, and they will each answer along the lines of “structured chaos.” Dressed in lab coats, high school friends Karl Spaeth and Logan Lautzenheiser, along with buds Andy Gasper and Chris Weir, present their absurdist satire in an original hour-long themed show at MOTR Pub on the last Sunday of every month.

With the members posing as outlandish scientists who take themselves very seriously, Future Science is the stupidest version of smart. Set as if a fake corporation is paying the scientists to put on a show, the audience can expect comedic interruptions.

“We try to write in a way that we know there are jokes in there but also leave it open enough that we can all riff on it,” says Gasper. When Spaeth ripped his pants during a show, the other three forced him to turn and face the audience during a sketch so they could see the tear.

Though the members of Future Science are all stand-up comedians, the show combines elements of sketch comedy, video and PowerPoint presentations with visual punchlines to make it interactive for bar patrons who weren’t expecting to catch a comedy show.

“Comedy isn’t supposed happen in a bar where people do Rock & Roll shows, you know?” Spaeth says. “So it’s fun to play with peoples’ expectations there.”

To accommodate the growing crowd, Future Science’s two-year anniversary event will move across the street to MOTR’s sister venue, the Woodward Theater, for a technology-themed show marking the group’s  300th sketch. They’ll take the best of those 300 sketches on a tour in August, hitting Indianapolis, Louisville, Dayton, Columbus and Kent, Ohio.

The name Future Science comes from a conversation the friends had in which they jokingly started naming inventions and describing what they did. After someone said, “Yeah, it’s future science,” the name stuck. And when those in charge of MOTR, where Gasper and Spaeth worked, said they wanted a comedy show to perform on Sunday nights, the group jumped on the opportunity to use the name and flesh out an act.

“This whole show came out of a love of comedy,” Spaeth says, “making videos with Logan in high school, and refining whatever was funny through stand-up and doing a similar thing with like-minded people.”

To plan each show, the group first comes up with a topic, like this month’s “technology.” Each member writes a series of themed jokes on his own. The best jokes are then pieced together, and they write a script, adding material as they rehearse — they’ll add jokes virtually up until showtime.

“Part of the reason we work so well as a group is that we’re usually all coming from different places,” Spaeth says. “As stand-ups, we all have great ideas that don’t necessarily work as a bit onstage but could work fleshed out and presented in a sketch or different medium, and I feel like that’s a big way this grew.”

All four grew up loving sketch comedy: Kids in the Hall, Upright Citizens Brigade and SNL. Lautzenheiser, Spaeth and Gasper made funny videos during high school. Weir, a class clown, thought of creative ways to disrupt class. He recalls telling a classmate in first grade he was so ugly his mom had to tie pork chops around his neck just to get the dogs to play with him.

“It’s worth doing the show each month just for a new poster,” Lautzenheiser says.

Future Science is also brought to life by Matthew Hontanosas, who films the videos used during shows. His knack for finding comedic timing in editing adds extra laughs.

“It’s a strange way to end the week and month,” Lautzenheiser says of the final Sunday performance slot. “I know tomorrow is Monday and I’m going to wake up weirder having seen this show. We want our audience to wake up as weird as us.”