'Luna Gale' at ETC: No Heroes, No Villains

In her director’s notes for Ensemble Theatre’s season-opening production of Rebecca Gilman’s Luna Gale, D. Lynn Meyers writes, “There are no villains here and no heroes, just people who make decisions as best they can.” The award-winning play, a work being staged by theaters across America this year, is about a battle over a baby, the daughter of two kids who have behaved ignorantly and irresponsibly if perhaps momentarily. The baby’s religiously zealous grandmother is given temporary custody by a well-meaning but overburdened social worker. Everyone wants the best for Luna Gale, but they have conflicting definitions of “best.”

Gilman’s play offers no easy answers. The baby was clearly put at risk by her parents Karlie (Molly Israel) and Peter (Patrick E. Phillips), but Cindy (Kate Wilford), Karlie’s judgmental mother, has her own agenda, one driven more by faith than concern for Luna’s well-being. Caroline (Annie Fitzpatrick), the weary social worker, has her own opinions about this dilemma, driven by her own complicated past. We know Caroline is stretched thin, but scenes with Lourdes (Natalie Joyce), a former client who has “aged out” of foster care, show her to be genuine and thoughtful.

Cliff (Brent Vimtrup), Caroline’s authoritarian supervisor, is a bureaucrat more concerned about his own career path than the people whose cases are piled up on her desk. Pastor Jay (Charlie Clark), Cindy’s smarmy minister, is a man of the cloth who loves to hold forth, but seldom digs into individual feelings if they veer from his own narrowly defined path.

This adds up to one powder keg of a situation with Luna Gale’s fate hanging in the balance. Is there a good place for her to land? Everyone has good intentions, but no one steps back to ask objectively what is best for her. That ambivalence is the stressor, and it fuels Gilman’s examination of current social issues and how they affect everyday people.

The resulting pressure cooker reveals a sad, abusive past event in Karlie’s young life — graphically described, it should be noted — that upsets the tug-of-war. But so many elements have become imbalanced that it’s tough to imagine how things can truly be resolved. Peter, the least likely candidate to do right by Luna Gale based on his torpid, disconnected state in the show’s opening scene, steps up and provides a tiny glimmer of hope. Phillips’ performance of Peter’s evolution is compelling and believable, even if it seems like it’s very thin ice that he’s on; at least the direction is positive. (Phillips, Israel and Joyce were ETC acting apprentices last season; they hold their own admirably with the veteran cast.)

Annie Fitzpatrick, an admirable and familiar performer at ETC, turns in yet another beautifully etched portrait, this time of a beleaguered woman trying to do what’s right, but thwarted by the system in which she works and circumstances that keep making things worse. “There are so many of you,” she says with deep frustration, “and you just keep coming and I can’t seem to slow it down so I can figure out how to save you or even just … keep you alive long enough to … have a life. That’s all. Just have a life.” You feel this desperation deep down inside Caroline’s character, in her physical presence, in her exasperated stares and sighs. Fitzpatrick is a marvel to watch.

Kate Wilford, another ETC veteran, believably plays the simplistic Cindy, unwilling to see how her behavior has made things more difficult. Brent Vimtrup, in his first work away from Cincinnati Shakespeare Company, is appropriately rigid and unlikeable as Caroline’s ambitious boss. Charlie Clark’s Pastor Jay seems a tad more like a caricature, but that’s how the role is written, and he lets us see the minister’s passion while also recognizing its inappropriate imposition on others.

The action of Luna Gale moves swiftly from scene to scene, thanks to a turntable offering three playing areas that can rotate into view — waiting rooms, an office, Cindy’s kitchen, a diner, all simply and cleanly designed by Brian Mehring. The frame around the stage, photo imagery of foreboding woods, is a subtle reminder of the thicket through which these characters — neither heroes nor villains — must struggle to find their way. It’s a powerful show that will leave you unsettled and thoughtful about today’s complex, troubled world. 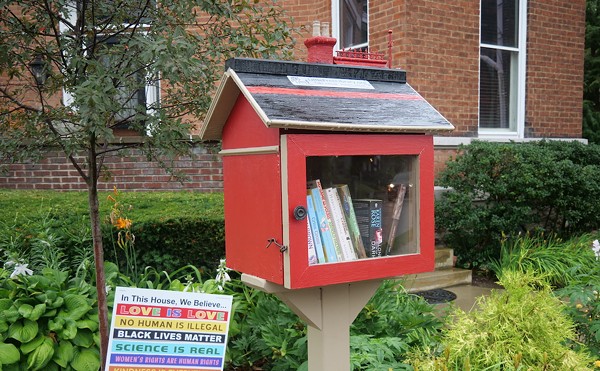