(Orange Is the New) Black Friday

Jenji Kohan’s dark comedic take on the true story of Piper Kerman’s stint in a federal women’s prison was a runaway hit on Netflix in its 2013 debut. Now Orange Is the New Black is back (full season on Netflix Friday) with another 13 funny, 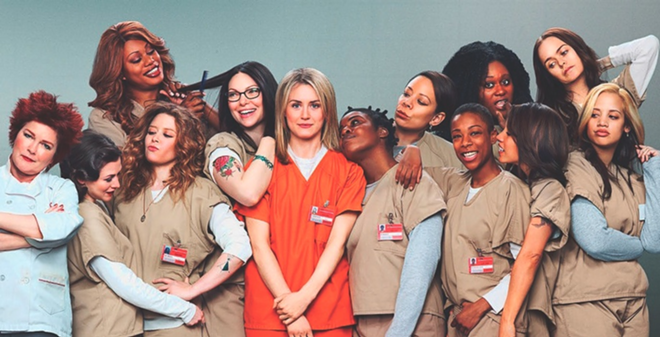 Orange is the New Black

Jenji Kohan’s dark comedic take on the true story of Piper Kerman’s stint in a federal women’s prison was a runaway hit on Netflix in its 2013 debut. Now Orange Is the New Black is back (full season on Netflix Friday) with another 13 funny, disturbing and thought-provoking episodes.

In the Jodie Foster-directed premiere episode we find Piper, a few weeks after the events of the show’s OMG-WTF season finale, in solitary confinement. She’s soon transferred to a prison in Chicago, where she’ll testify in Alex’s drug boss’ trial.

And while the series does revolve around Piper’s sentence and relationships in and out of Litchfield prison, it’s the supporting cast of women that keeps the show spinning. Alex, Red, Sophia, Crazy Eyes and the other inmates, including some newcomers, all return this season — even Pennsatucky. Expect the “chosen” convict to return with a new pair of chompers as a result of Piper’s bloody beat-down. Every woman deals with shifts in power and tumultuous relationships in lockup differently — and they each do what they believe they must to survive. Telling flashbacks give viewers a new perspective on these characters we know and love (or love to hate).

Healy and the prison staffers continue to dole out subjective justice, increasingly complicating the women’s lives more often than helping them. Between the brawls, prison hacks and infinite love triangles (pregnant Daya’s relationship with Pornstache and Bennett clearly takes the cake), Orange doesn’t pull any punches.

And in case we end with another epic cliffhanger, fear not: Season Three is already a go. Bring on the binge-watching!

Catfish: The TV Show (10 p.m., MTV) – Catfish: The Celebrity Edition! Actress Tracie Thoms (Rent, Death Proof) seeks Nev and Max’s help after being duped by a superfan who Thoms believes created multiple fake Twitter accounts — one of which the ’fish “killed off.”

Vice (11 p.m., HBO) – The heroin crisis in Iran; how global warming is sparking a new Cold War in the Arctic.

Power (Series Premiere, 9 p.m., Starz) – The Good Wife producer Courtney Kemp Agboh and 50 Cent (yup) team up to present this drama that explores the connection between an underground drug network and a hip New York nightclub. Hopefully the show is more of a homerun than 50’s now-infamous first pitch at a recent Mets game. Zing!

The Tony Awards (8 p.m., CBS) – The 68th annual celebration of theater excellence, not hosted by Neil Patrick Harris for once! (Don’t worry, he’s a nominee — for Hedwig and the Angry Itch.) Musical A Gentleman’s Guide to Love and Murder leads in nominations with 10 nods. Hugh Jackman hosts.

Game of Thrones (9 p.m., HBO) – Fans know that while every episode can bring surprises, the second-to-last always packs a punch (See: Ned Stark, the Battle of Blackwater Bay, the Red Wedding). And after last week’s brutal trial-by-combat, Tyrion’s fate is not looking good. We head north for the bulk of this episode’s action, as Mance Rayder’s army approaches Castle Black. One thing’s for sure this week: more giants.

Halt and Catch Fire (10 p.m., AMC) – The trio successfully makes it past IBM’s team, but now struggles to get past their individual differences to start building their new machine.

Veep (Season Finale, 10 p.m., HBO) – In two final episodes, Selina’s staffers attempt to give her a “folksy” makeover and juggle her busy schedule as the New Hampshire primary looms.