10 Cincinnati Fall Arts Things to Do in Theater, Film, Visual Arts and More

Staff recommendations including BLINK, shows at the CAC and CAM, an Evening with David Sedaris and the 10th anniversary of "Fantastic Mr. Fox"

Usually we look to the Cincinnati Shakespeare Company for plays that have been around for a century or four, but some shows become classics in less time. One of those will kick off Cincy Shake’s upcoming season: Tracy Letts’ August: Osage County. The 2008 Pulitzer Prize winner (it also won the best play Tony Award that year) is a classic in many ways; it has three acts, lots of characters — not typical of most modern dramas. In fact, it’s a sprawling story about three dysfunctional generations of the Westin family struggling to understand the suicide of the Westin patriarch. They gather in the family home where old wounds and buried secrets bubble and fester. There’s humor and heartbreak, and it’s a fine choice to showcase Cincy Shakes’ veteran actors, especially the women. The 2019-2020 theater season is billed as “The Season of the Woman,” with each production having sensational roles for females; August: Osage County could just have the most intriguing. Sept. 6-28. $60-$71. Cincinnati Shakespeare Company, 1195 Elm St., Over-the-Rhine, cincyshakes.com. — RICK PENDER

ONSTAGE: Once on This Island

The Cincinnati Playhouse’s season opener, Once on This Island, is a Calypso-flavored musical, a mythical fairy tale set in the French Antilles archipelago in the Caribbean Sea. Ti Moune is a peasant girl who rescues Daniel, a boy from a wealthy, aristocratic family, after a car accident. They fall in love, but they’re from two disparate worlds and social classes. Four pompous gods conspire and compete to shape the lives of the pair, but it’s a story of life, pain, grief, faith and hope. A 1991 Tony Award nominee, the show’s 2017 Broadway production was named the season’s Best Revival of a Musical. The joyous score was composed by Stephen Flaherty, an alum of the University of Cincinnati’s College-Conservatory of Music, and it’s one that will have you humming all the way home. The 90-minute show is a perfect choice for everyone in the family, making it a great way to kick-off a season of theater-going. Sept. 7-Oct. 6. $30-$72. Cincinnati Playhouse in the Park, 962 Mount Adams Circle, Mount Adams, cincyplay.com. — RP

Why spend 11 hours listening to recordings of Beethoven’s 32 piano sonatas when, over the course of one day, you can hear them played by one of the greatest pianists out there? Stewart Goodyear performs this astounding feat at Memorial Hall in three consecutive concerts beginning at 10 a.m. The piano is the only genre for which Beethoven consistently wrote throughout his life, and five of the sonatas, including “Moonlight,” are the best known in all of piano literature. Goodyear has done the “sonatathon” in four other locales and this performance marks his Chamber Music Cincinnati debut. It’s an exceptional opportunity to witness this kind of artistry and an even rarer chance to hear Beethoven mature as a genius of composition over a 30-year period. The sonatas are performed in chronological order with an intermission during each concert and breaks for lunch and dinner. CMC’s website includes a detailed setlist so you can check to see which concert features “Moonlight” or “Hammerklavier.” 10 a.m.-1:40 p.m.; 3-6:30 p.m.; 8-10:50 p.m. Sept. 7. $40; $10 student rush tickets day of concert. Memorial Hall, 1225 Elm St., Over-the-Rhine, memorialhallotr.com, cincychamber.org. — ANNE ARENSTEIN The Contemporary Arts Center will kick off its season with Art and Race Matters, the first major survey of the work of the underrepresented and highly influential artist Robert Colescott since 1987. Colescott was known for his often-satirical paintings, which examine both the broad scope of black history and his own identity. Having begun his career in Portland, Oregon and Seattle in the 1950s and ’60s, Colescott drew inspiration from the civil rights movement. Through his work, he touches on the historical exclusion of people from African descent and blackness as it is presented in popular culture. The CAC show will navigate the breadth of his work over a stretch of 40 years, presenting it at a time the museum says his work has never been more relevant. Sept. 20, 2019-Jan. 12, 2020. Free. Contemporary Arts Center, 44 E. Sixth St., Downtown, contemporaryartscenter.org. — MACKENZIE MANLEY 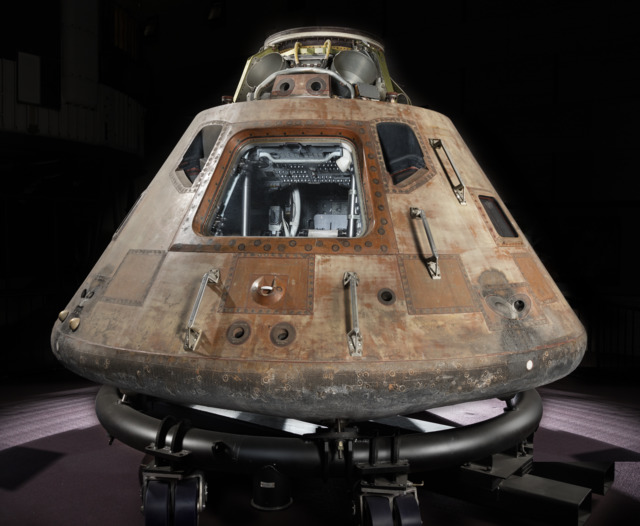 This year marks the 50th anniversary of the 1969 Apollo 11 moon landing mission, harkening back to a time when space travel was cool and innovative multimillionaires — cough, Elon Musk — weren’t sending their Tesla into space for no apparent reason. This upcoming exhibition at the Cincinnati Museum Center will celebrate that landmark achievement, featuring the Command Module Columbia, the only portion of the spacecraft that survived the crew’s journey to the moon. (This will mark the first time since 1976 that the module has been on display outside the National Air and Space Museum in Washington, D.C.) Visitors can also catch a glimpse of Buzz Aldrin’s gold-plated extravehicular helmet visor and thermal-insulated gloves; the star chart that helped guide Aldrin, Neil Armstrong and Michael Collins on their travels; the survival kit that was onboard; and more. Cool aside: Armstrong, aka the first man to actually walk on the moon, was born a Buckeye and later taught at the University of Cincinnati. Sept. 28, 2019-Feb. 17, 2020. $16.50 adults; $15.50 seniors; $10.50 children; free toddlers; $10.50 member adult; $7.50 member child. Cincinnati Museum Center, 1301 Western Ave., Queensgate, cincymuseum.org. — MM

Five days. Over 60 films. Seven locations. The Over-the-Rhine International Film Festival was first launched in 2013. The event originally focused on works that explored and celebrated the lives of those who experience disabilities. Last year, the programming moved beyond that scope to include “stories that celebrate the human spirit.” (Until 2018, it was known at the ReelAbilities Film Festival and is still helmed by LADD, a local nonprofit that empowers adults with developmental disabilities.) That same sentiment will be carried on into this year’s fest. Whether you’re a filmmaker or a cinephile, you’re likely to resonate with a handful of works in their expansive lineup. Oct. 2-6. Prices vary. More info at otrfilmfest.org. — MM

In its inaugural 2017 run, BLINK Cincinnati was one of the largest and most innovative light and art events in the nation, transforming city blocks all the way from The Banks to the edges of Over-the-Rhine into a glowing, pulsing wonderscape. For four days, Cincinnatians could feast their eyes on large-scale projection mapping, light-based sculptures and installations, a parade, murals and performances. If you missed it in 2017, don’t fret: BLINK is back for a second run Oct. 10-13, 2019 — this time stretching across the Roebling Bridge and into Covington, Kentucky. This year’s fest will span 30 blocks, feature those same beloved large-scale light and art events, and also include a live performance from AltRock act Grouplove. To mark the expansion across the Ohio River, BLINK also plans to illuminate the Roebling, bathing it in “beautiful color, light and sound.” Oct. 10-13. Free. More info at blinkcincinnati.com. — MM

LIT: An Evening With David Sedaris

English major heartthrob™ David Sedaris is known for his witticisms and critically-acclaimed memoirs and essays. Armed with a dry sense of humor, he has authored a handful of bestsellers, including Naked, Me Talk Pretty One Day and Dress Your Family in Corduroy and Denim. His latest book release, Calypso, is a collection of 21 semi-autobiographical essays that hone-in the creeping realization of one’s own morality that comes with middle age. Presented by WVXU, the one-night event, which includes a Q&A session and book signing, will unfold in Aronoff Center for the Arts’ Procter & Gamble Hall. 7:30 p.m. Oct. 21. $48.75-$58.75. Aronoff Center for the Arts, 650 Walnut St., Downtown, cincinnatiarts.org. — MM

Delve into a rich history that spans three millennia of Spanish culture with the Cincinnati Art Museum. Over 200 works of art and historical documents from Spain and Latin America, including Roman Spain, will be featured in this ticked exhibition opening Oct. 25. From Medieval times to the early 20th century, you can expect to see a little bit of everything — paintings, sculptures, decorative arts, works on paper. Having debuted at Museo Nacional del Prado in Madrid — and later on view in Mexico City and Albuquerque, New Mexico — many of these works have never been on exhibition outside of Hispanic Society of America in New York City and some pieces have never been exhibited at all. Oct. 25, 2019-Jan.19, 2020. $10; free for members. Cincinnati Art Museum, 953 Eden Park Drive, Mount Adams, cincinnatiartmuseum.org. — MM

Wes Anderson's first foray into stop-motion animation turns 10 this year, but it hasn't lost an iota of charm since 2009. Starring the vocal talents of George Clooney, Meryl Streep and (of course) Bill Murray as Roald Dahl's beloved cast of woodland critters, Fantastic Mr. Fox is the coziest installment in the heist film canon. While the intricately-designed sets are alluring enough to warrant a re-watch, the family flick holds up as a true artistic statement — family dynamics are tested, the class struggles are all too real and the curse words are skillfully deployed (though hilariously censored). The Mini Microcinema will celebrate Fantastic Mr. Fox's anniversary with a retrospective screening and themed snacks. We can only assume that cider will be on the menu. 5 p.m. Nov. 9. $25. Mini Microcinema, 1329 Main St, Over-the-Rhine, mini-cinema.org.  — JUDE NOEL