10 Greater Cincinnati Dog Parks for Pups and Their People

Looking for a place to get the zoomies out? 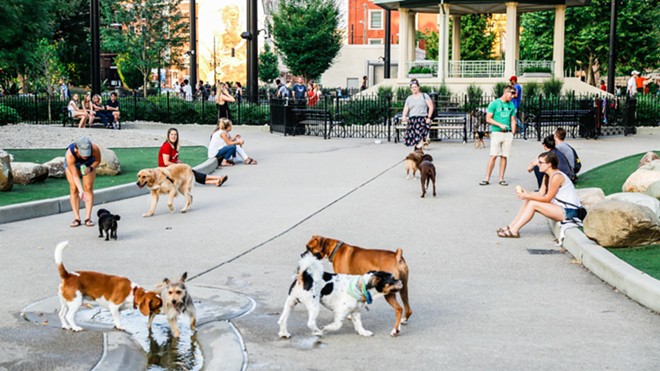 Good news for Covington canines: In January, crews broke ground on a new neighborhood dog park that officials say should be open by the spring.

Funded by federal sources and a $10,000 donation from the Northern Kentucky Association of Realtors, the park — at Ninth and Philadelphia streets — will take over a site currently occupied by a playground.

“I’m really excited, in fact, probably ecstatic,” Covington Parks & Recreation Manager Ben Oldiges says in a statement about the park. “This has been talked about for the last decade, and we’re finally underway. There will be a lot of happy dogs and dog owners.”

The forthcoming dog park will be named after Army Sgt. Jason Bishop, a graduate of Covington’s Holmes High School who was killed in Iraq in 2006 (the playground was also named after Bishop).

Dogs will be able to get all their zoomies out at this 1.5-acre site, chosen via a survey of Covington dog-owners. Officials say the cost and wait will be worth it when the park unveils its “high-end decorative fencing,” water fountains for humans and dogs, benches (mostly for humans), a trail around the perimeter and shady areas for relaxing.

While you and your canine pals wait for the Covington park to open, here are 10 other spots around the city where your hounds can play:

David J. Stricker Dog Park
Found off a walking trail at the Batavia Township Community Park, this spot offers an acre for dogs to run around and enjoy themselves off-leash. Located at the 71-acre Batavia Township Community Center and Park, it also boasts nearby wooded trails and paved walking trails. 1539 Clough Pike, Batavia, bataviatownship.org.

Doris Day Dog Park
This 2-acre park adjacent to Mt. Airy forest features agility equipment like ramps and tunnels as well as water fountains and pools in the summer. It is named after Cincinnati-born actress and singer Doris Day, who was an ardent animal lover and activist. 3006 Westwood Northern Blvd., Mt. Airy, cincinnatiparks.com.

Fido Field
This downtown dog park offers an oasis for your pup to run around and meet others within a city environment. The park describes itself as Cincinnati’s “first fenced, off-leash, nonprofit urban dog park.” 630 Eggleston Ave., Downtown, instagram.com/fidofield.

Hamilton Bark Park
This park has tons of room for pups to run around and socialize, plus an adorable sculpture of a dog. 20 New London Road, Hamilton, hamiltonparks.net.

Kellogg Park Dog Field
Your dogs can run and play fetch at this 4-acre park in Anderson that features drinking fountains and an ArtWorks mural. 6701 Kellogg Road, Anderson, andersonparks.com.

Newport Dog Park
The popular Newport Dog Park was forced to close in 2020 due to overcrowding and infrastructure issues, which led to greener pastures. The community teamed up with the City of Newport to raise funds and resources to reopen the park even bigger and better than before — just 500 feet away and behind the Campbell County Public Library’s Newport Branch. The off-leash dog park is twice the size of the former park and features a separate space for small dogs, as well as concrete pathways and community walking paths, “pet-friendly benches” and landscaping. 901 E. Sixth St., Newport, facebook.com/NewportDogPark.

Washington Park Dog Park
Enjoy a nice piece of green in the center of the city with a view of Music Hall, Memorial Hall and the expanse of the park. Grab a beer or wine from the Porch bar and watch your pups frolic in the creek-like water feature and climb up a turf-covered hill (with a special tunnel to crawl through). 1230 Elm St., Over-the-Rhine, washingtonpark.org.