This weekend, step on board a World War II-era ship, cut your own sunflowers at a fall festival or dance the night away at a deadmau5 show. 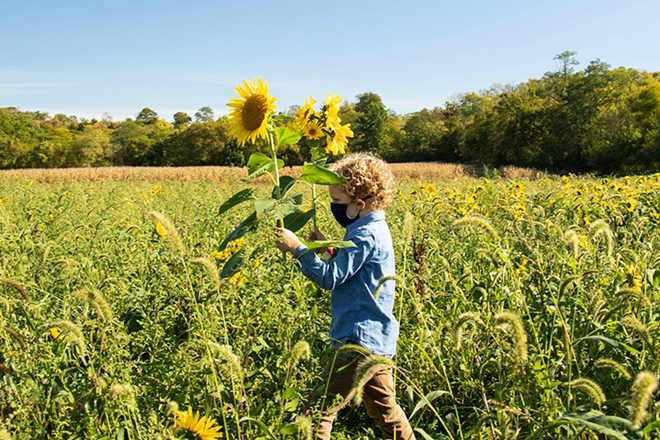 This weekend is so packed that CityBeat is adding two extra days to the usual event recommendations. Read on for sports, history, family fun, music and more.

Cincinnati Bengals vs. Miami Dolphins at Paycor Stadium
Are you ready for some football? The Cincinnati Bengals are riding high off their first regular-season win against the New York Jets; now it’s time to catch some sea life. During the nationally televised game against the Miami Dolphins (3-0), the Bengals (1-2) will sport a new look for the first time: white helmets, jerseys and pants, all with black stripes. The NFL got rid of a rule prohibiting alternate gear beginning this season, and the Bengals obviously are taking full advantage. During halftime, the team will induct offensive tackle Willie Anderson and wide receiver Isaac Curtis into the Bengals' Ring of Honor. 8:15 p.m.  Sept. 29. Tickets start at $150. Paycor Stadium, 1 Paul Brown Stadium, Downtown, bengals.com. Read CityBeat's story about Gold Star Chili celebrating the Bengals' new white uniforms with white cheddar for one day only.

FotoFocus Biennial
More than 600 artists and curators are exploring the theme of “world record” during the regional 2022 FotoFocus Biennial, a month-long series featuring more than 100 artistic exhibitions, installations and events centered around photography and lens-based art. The biennial’s core “Program Week” takes place from Sept. 29-Oct. 8. It includes not only art exhibit openings but also keynote lectures, screenings, receptions, tours and panel discussions with artists, curators and collaborators at museums, galleries and other venues across Greater Cincinnati, Northern Kentucky, Dayton, Oxford and Columbus. Locally, there are more than 50 venues participating, ranging from the Cincinnati Art Museum, Contemporary Arts Center and Taft Museum of Art to Wave Pool, the Michael Lowe Gallery and Somerset. See a full schedule, exhibit details and venue information at fotofocus.org. Read CityBeat’s story about FotoFocus.

World War II-Era Naval Ship Tour at Sawyer Point Public Landing
Want to stand on the deck of a World War II-era ship that took part in the invasion of Omaha Beach on D-Day? All aboard! Head to Public Landing at Sawyer Point to see a 328-foot landing ship designated LST 325 that is capable of transporting 20 Sherman tanks in the hold and, on the main deck, 30-40 trucks, fuel, ammunition, supplies and soldiers — enough firepower to turn the tides of conflict at a global scale. Visitors can get a glimpse of where soldiers readied themselves for battle across a number of major military campaigns, including the Korean War and Vietnam conflicts. Sept. 28-Oct. 3. $15 adults; $7.50 ages 6-17; free for WWII and Korean War vets, first responders and active-duty military in uniform. Public Landing at Sawyer Point, 435 E Mehring Way, The Banks.

Hamilton at the Aronoff Center
Who could have guessed hip-hop and the founding fathers of the United States would be such a successful musical theater combination? At press time, tickets are still available for performances of Lin-Manuel Miranda's Broadway smash hit. The show that tells the story of Alexander Hamilton has created a revolutionary moment in theater. It’s a tale of our nation from more than two centuries ago, but told by America now. A cast of 19 – almost all Black and brown performers – is propelled by a score that blends hip-hop, jazz, R&B and Broadway. Hamilton has had a profound affect on culture and politics well beyond most Broadway musicals, and this weekend is the last chance to catch this run of the show that's had a four-week run in Cincinnati. Through Oct. 2. Tickets start at $59. Aronoff Center, 650 Walnut St., Downtown, aronoffcenter.net. Read CityBeat's preview of Hamilton.

David Koechner at Liberty Funny Bone
David Koechner,The Office’s Todd Packer, is doing a special run of stand-up performances as well as hosting an afternoon of The Office trivia at the Liberty Funny Bone on Sept. 30 and Oct. 1. He’ll make five appearances while in Greater Cincinnati.Koechner is doing two stand-up shows each evening, but his special Saturday afternoon trivia appearance will be especially fun for fans of The Office. The afternoon of trivia will be broken into rounds and winners will be given, according to Funny Bone, “mediocre prizes.” In the final round, players will need to channel their inner Jims, Pams, Pack-Mans and Stanleys to impress Koechner with their acting abilities so he can pick the winners. 7:30 p.m. and 9:45 p.m. Sept. 30; 7 p.m. and 9:15 p.m. Oct. 1. Trivia begins at 3 p.m. Oct. 1. All performances are 21 and up. Tickets start at $30. Liberty Funny Bone, 7518 Bales St., Liberty Township, liberty.funnybone.com. Read CityBeat's preview of the event.

Sunflower Festival at Gorman Heritage Farm
Now that we are firmly in autumn, there are plenty of outdoor festivals best attended wearing a flannel shirt. Gorman Heritage Farm’s Sunflower Festival is a celebration of the gloriously golden annual plant and all it offers. The event has, according to a release, “live music, hayrides, pumpkins, craft vendors, food trucks, meet the farm animals, Farm Fun Education Station, mule drawn carriage rides, High Grain Beer Garden and Cut Your Own Sunflowers.” The event takes place rain or shine except for in dangerous weather. 10 a.m.-6 p.m. Oct. 1 and 2. $10 adults; $5 ages 3-17 and over 60; free for age 3 and under. Gorman Heritage Farm, 10052 Reading Road, Evendale, gormanfarm.org.

Our Harvest’s 10th Anniversary Celebration & Music Festival at Bahr Farm
Show your appreciation for local cultivators at Bahr Farm during Our Harvest’s 10th anniversary celebration. Our Harvest is a multi-stakeholder, worker-owned cooperative of farms that provide fresh, responsibly grown produce for the Cincinnati area. If you’ve been to any farmers markets around the area over the past decade you’ve likely seen Our Harvest’s produce on a table or boxed up, ready to be picked up by supporters of their community-supported agriculture (CSA) program. Tickets to the celebration include food, drinks, a tour of the farm and live music by Joe’s Truck Stop and Toon Town. 5-8 p.m. Oct. 1. Tickets are $50-$75, plus there's a pay-what-you-can option. Bahr Farm, 969 W. North Bend Road, College Hill, ourharvest.coop.

FC Cincinnati vs. Chicago FC at TQL Stadium
Cincinnati’s professional soccer team has been on a tear lately, setting the league’s longest unbeaten streak on Sept. 27 – 11 consecutive games without a loss. But the end of the regular season is at hand, and fans of the Orange and Blue can gather at Cincinnati’s TQL Stadium for the final home game. FC Cincinnati (11-13-8) will take on Chicago FC (9-8-15) on Oct. 1 before hitting the road for the season’s final match against D.C. United in Washington, D.C. 7:30 p.m. Oct. 1. Tickets start at $45. TQL Stadium, 1501 Central Parkway, West End, fccincinnati.com.

Art on Vine at Fountain Square
Head to Fountain Square to find local artists and makers showcasing and selling their work. According to James Jenkins, the event’s organizer, “Art on Vine has hosted over 90 events in our nine years of existence and have made donation to over 20 local nonprofits. It's hard to believe that Art on Vine started out as a college project in 2012, to now a local event that has hosted over 2,500 local artists in our nine years of operating.” Noon-6 p.m. Oct. 2. Free. Fountain Square, 520 Vine St., Downtown, artonvinecincy.com.

Last Bash at Tri-State Antique Market
Indiana’s largest antique and vintage-only market is preparing for its season finale Located a short drive from Cincinnati in Lawrenceburg, the market has more than 120 vendors who only sell merchandise older than 30 years and out of current production. According to a release, “Vinyl records and vintage clothing are hot, as is Pyrex and vintage advertising pieces. Antique furniture continues to be a big seller at the Market, from mid-century modern pieces to rustic furnishings from the 1800s … Cozy quilts, vintage Star Wars Halloween costumes, blanket chests, costume jewelry, vintage sweaters, retro kitchenware and so much more will be on hand to face the changing seasons with style and panache.” Get there early to find the best stuff first  during the final event until May. 7 a.m.-3 p.m. Oct. 2. $4 adults; free for ages 18 and under. Lawrenceburg Fairgrounds, 351 E. Eads Parkway, Lawrenceburg, lawrenceburgantiqueshow.com.

Hyde Park Square Art Show
More than 200 artists will fill Hyde Park Square to sell their work, turning the pleasant little neighborhood stretch into a bustling bazaar of paintings, photographs and crafts of all sorts. This family-friendly event is perfect for a pleasant Sunday outing during which you can get a head start on holiday shopping and support local creatives at the same time. Stop at one of the many restaurants within walking distance and make a day of it. 10 a.m.-5 p.m. Oct. 2. Free admission. Hyde Park Square, 2700 Erie Ave., Hyde Park, hydeparksquare.org.

The Chicks at Riverbend Music Center
After rescheduling their June show due to vocal concerns, The Chicks are now ready to rock. The fiery country-pop trio continues to pour gasoline all over outdated notions, and they still aren’t “ready to make nice.” The band – Natalie Maines, Emily Strayer and Martie Maguire – promises to retain their outspoken spark as they continue their new tour through North America. The acclaimed 2020 album Gaslighter – their first in 14 years – will provide the fuel for the women’s current fire. Written in the midst of Maines’ divorce, Gaslighter is a blend of nervy directness and swirling emotions. Patty Griffin will open the show. 7:30 p.m. show time; 6 p.m. doors Oct. 2. Riverbend Music Center, 6295 Kellogg Ave., East End, riverbend.org. Read CityBeat's preview of the original tour date.

1940s Day at Cincinnati Museum Center
For some light-hearted, vintage fun, Union Terminal is offering up a day of 1940s-style festivities. There will be classic cars on display for attendees to admire and samples of popular food from that era (like Spam). There will also be live music all day and dancing is encouraged. For those interested, there will even be a costume contest for those attending the event in their chicest '40s ensembles. Of course, one can’t have a 1940s-themed day at a museum without also paying homage to some of the more serious parts of that era. Visitors can meet Holocaust survivor and veteran Al Miller, who escaped Nazi Germany in 1937. Author and University of Cincinnati professor LaVerne Summerlin will also be at the event, speaking to visitors about the unique Black experience of living through the 1940s in Cincinnati and the historic West End. 10 a.m.-5 p.m. Oct. 2. Entry to the event is included with museum admission and is free for Cincinnati Museum Center members. Cincinnati Museum Center at Union Terminal, 1301 Western Ave., Queensgate, cincymuseum.org. Read CityBeat's preview of the event.

Pit Beef Sandwiches by Le Boeufetter at Liberty’s Bar & Bottle
Pit beef is a Baltimore culinary tradition and, sadly, the closest approximation most Cincinnatians have of the classic recipe is an Arby’s roast beef sandwich. Le Boueffeter, a promising sandwich pop-up that’s been making occasional appearances around Over-the-Rhine, is here to fix that. Instead of weirdly gray shaved beef slurry, think voluptuously medium-rare top round sliced real thin, slathered in horseradish sauce and garnished with sliced raw onion on an onion roll. Pair it with some nice wine or even a cheap beer. Check Instagram for times. Liberty’s Bar & Bottle, 1427 Main St., Over-the-Rhine, instagram.com/le_boeufetter.