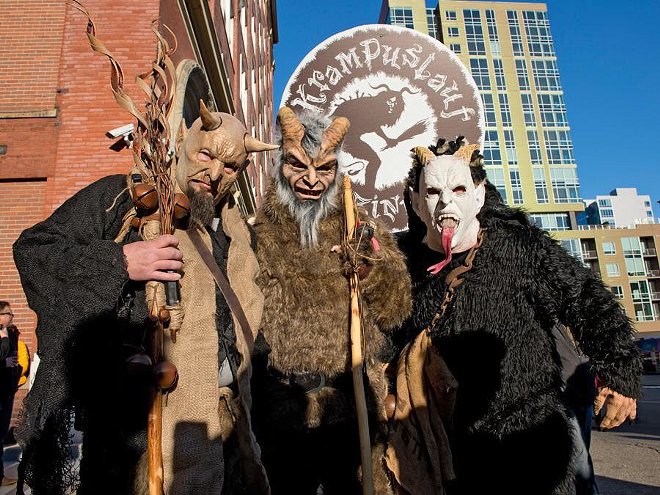 Photo: Provided by Krampuslauf Zinzinnati
Krampus will be visiting the Germania Society's Christkindlmarkt this weekend.
November already has the perfect mix of events that celebrate fall weather while looking ahead to wintry activities. Choose your favorites below.

Germania Society Christkindlmarkt
The Germania Society's Christkindlmarkt is self-described as the “oldest and most authentic Christmas market” in Cincinnati. Featuring a pavilion and heated tents filled with local vendors and imported goods, attendees will find everything from German nutcrackers and steins to cuckoo clocks and ornaments. There will also be wursts, Bavarian pastries, mock turtle soup and traditional gluhwein (hot, mulled wine). Santa Claus, St. Nicholas and Krampus will be in attendance all weekend, with a special lantern parade on Saturday. 5-10 p.m. Nov. 4; 11 a.m.-10 p.m. Nov. 5; noon-5 p.m. Nov. 6. $5; free 12 and under and active/retired military. Germania Park, 3529 W. Kemper Road, Pleasant Run, germaniasociety.com.

Carmina Burana and Extremely Close at the Cincinnati Ballet
This Cincinnati Ballet continues its season with a double-feature of Carmina Burana and Extremely Close at Music Hall. Based on a collection of 11th-century poetry, Carl Orff’s Carmina Burana features 24 of those works set to music. Utilizing choreography by Nicolo Fonte, the ballet will perform accompanied by the Cincinnati Symphony Orchestra and May Festival Chorus. Extremely Close by Alejandro Cerrudo is “part art installation and part movement drama,” per the ballet, as “dancers negotiate their way through a perpetually shifting environment.” Compositions by Philip Glass and Dustin O’Halloran score the work. 8 p.m. Nov. 4; 2 and 8 p.m. Nov. 5; 1 p.m. Nov. 6. Tickets start at $29. Music Hall, 1241 Elm St., Over-the-Rhine, cballet.org.

Lights Out at Dent Schoolhouse
If you aren’t quite ready to say goodbye to spooky season, Dent Schoolhouse has a freaky tradition for die-hard horror hounds. This weekend — and only this weekend — the lights go out at Dent for a truly terrifying haunted house experience. According to the event description, all guests get is a glow stick to make their way through the maze of animated frights and two-times the amount of normal fiends. “No lights, no help and lots of live monsters,” reads the website. “Lights Out is our most intense haunted house event of the year.” 7:30 p.m.-midnight Nov. 4 and 5. $30; $50 fast-pass; $60 front-of-line. 5963 Harrison Ave., Dent, dentschoolhouse.com.

Dinosaurs of Antarctica at the Cincinnati Museum Center
Step back 200 million years in time to the prehistoric Antarctic at the Cincinnati Museum Center. Dinosaurs of Antarctica takes guests on a journey not to an icy landscape but to a verdant and tropical one. Back then, Antarctica was covered in swamps, seas and warm forests as part of the supercontinent Gondwana. The exhibit includes life-sized recreations of dinosaurs, like the 25-foot-long crested Cryolophosaurus, in its native habitat, backdropped by the aurora australis (southern lights). There are also artifacts and tools from expeditions, as well as fossils and skeletons. The OMNIMAX film Dinosaurs of Antarctica is a companion to the show (and ticketed separately). Through Jan. 15. Free with museum admission ($17.50 adult; $13.50 seniors and ages 3-12; free for members). 1301 Western Ave., Queensgate, cincymuseum.org.

Celebrating David Bowie at the Taft Theatre
[Editor's note: This event was postponed after publishing. "The tour producers of Celebrating David Bowie have announced tonight’s performance in Cincinnati has been postponed until Spring 2023. Rock’n’Roll Hall Of Famer Todd Rundgren is navigating a case of laryngitis, impacting his ability to sing," a press release reads.]
David Bowie artistically reinvented himself so many times that rock and roll was never the same when he died in 2016. From Ziggy Stardust to The Blind Prophet, Bowie's musical legacy is now being honored during Celebrating David Bowie at the Taft Theatre. Featuring singer/songwriter Todd Rundgren, famous for his own discography and hit singles, along with Adrian Belew, Scrote, Royston Langdon and more, the musicians will be interpreting Bowie's greatest hits onstage. 8 p.m. Nov. 4. Tickets start at $38. Taft Theatre, 317 E. Fifth St., Downtown, tafttheatre.org.

Photo: Facebook.com/MyFountainSquare
Ice skating and on-ice bumper cars are returning to Fountain Square for the holiday and winter seasons.

UC Health Ice Rink at Fountain Square
The UC Health Ice Rink at Fountain Square opens this weekend, offering both ice skating and the chance to drive bumper cars on ice. The rink offers two kinds of sessions skaters can book: bumpers and skating or skating only. For bumpers and skating, the ice will be divided into two sections with skaters on one side and bumper-car drivers on the other. The annual holiday tree will also be going up on Fountain Square this weekend, with a lighting celebration to follow later this month. Nov. 5-Feb. 20. $15 skating and bumper cars; $10 skating only. 520 Vine St., Downtown, myfountainsquare.com.

Shrek Rave at Bogart’s
A “Shrek Rave” is coming to Bogart’s. After the very first Shrek Rave took Los Angeles by storm earlier this year, ravers around the country couldn’t get enough of the idea. Soon enough, the “Swamps Across America” tour began to take shape. More than just solid bops like, “I’m A Believer,” the Shrek Rave will offer up all sorts of trippy ogre-themed fun, according to a press release. Themed drinks will be available, including something called “swamp water.” There also will, of course, be laser lights, Shrek totems, thumping music, and plenty of questionable costuming. What else do you need? That’ll do, Donkey. 8:30 p.m. Nov. 5. $20. Bogart's, 2621 Vine St., Clifton, livenation.com.

Celestial Holiday at Krohn Conservatory
During Celestial Holiday, Krohn Conservatory will be transformed into “a glowing winter wonderland surrounded by sparkling lights and shining stars,” per an event description. Attendees can expect the annual model train display, with locomotives zipping through botanical recreations of local landmarks, utilizing material like wood and moss to make mini versions of the spectacular originals. New this year is a replica of Music Hall, created by the artists at Applied Imagination. Plants on display will include splashes of red glitter poinsettias, white dusty miller and silver helichrysum icicles. 10 a.m-8 p.m. daily Nov. 5-Jan. 8. $10 adults; $7 ages 5-17; free 4 and under. 1501 Eden Park Drive, Mt. Adams, cincinnati-oh.gov/cincyparks.

Northside Record Fair
Dust off your turntables and fire up the stereo, the Northside Record Fair is celebrating its 10th anniversary. If you’ve never attended, the record fair turns the former North Presbyterian Church into a church of vinyl, where devotees gather at the altar of LPs, 45s, 7-inches, cassettes, CDs, posters, T-shirts and more, all to a seriously curated soundtrack. This fair brings in collectors from all over the country, being one of the largest and best of its kind. Looking for something rare? Search the stacks; this is the place to find it. 11 a.m.-4 p.m. Nov. 5. $5; $10 for early bird admission (at 10 a.m.). 4222 Hamilton Ave., Northside, northsiderecordfair.com.

Mt. Washington Pumpkin Chuck
Billy Corgan, eat your heart out. Now that it’s time to tone down the creepy decorations and take those jack-o-lanterns off your front porch, what better way to dispose of them than by hurling them through the air with a trebuchet, like you’re waging medieval warfare? The annual Mt. Washington Pumpkin Chuck is back at Stanbery Park and ready to fire. There will be beer, food, games and live music (if Smashing Pumpkins isn’t on the playlist, it’d be a huge missed opportunity). The trebuchet will launch pumpkins over Stanbery Park Hill, where they can properly decompose and feed wildlife at the same time. Don’t throw your old pumpkins in the trash, fling them at high speed in a public park instead. Noon-5 p.m. Nov. 5. $5 per pumpkin chuck; $10 to chuck a provided pumpkin. Stanbery Park, 2221 Oxford Ave., Mt. Washington, stanberypark.com.

Pride Market at the Park
The second annual Pride Market at the Park is set to support local LGBTQ+ business owners in Washington Park. Check a few names off your holiday shopping list while helping to promote the work and messages of our city’s entrepreneurial LGBTQ+ artists at a time when the community is being targeted by conservative lawmakers and bigoted fundamentalists more than ever. 10 a.m.-4 p.m. Nov. 5. Free admission. Washington Park, 1230 Elm St., Over-the-Rhine, washingtonpark.org. 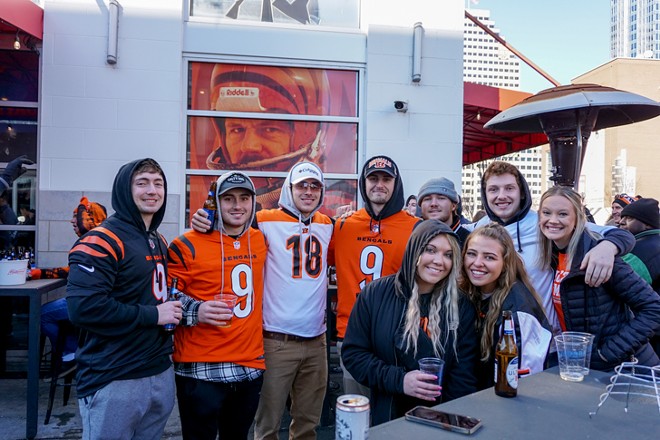 Cincinnati Bengals vs. Carolina Panthers Pregame at The Banks
After losing to the Cleveland Browns earlier this week, the Bengals are taking on another foe, this time at home. The Carolina Panthers will be stepping into the home jungle at Paycor Stadium, facing off against the Bengals 1 p.m. But before cleats hit turf, fans can pregame at The Banks during an official tailgate. Expect live music, lawn games and a special kids area with face painting, inflatables and a DJ. The Banks is a DORA district, so you can drink while you shout “Who Dey” into the air. 10 a.m.-1 p.m. Nov. 6. Free admission. Freedom Way between Race Street and Joe Nuxhall Way, The Banks, bengals.com.

A Taste of Gratitude at Rhinegeist
Enjoy a tasty evening of sample-sized bites, live music and an auction to benefit the local Incubator Kitchen Collective (IKC), which has been living its mission to help people start their small business dreams since 2013. More than 160 "foodpreneurs," as IKC calls them, have grown their business through access to the facility's licensed kitchen, education programs and support system. IKC also works to help its tenants by offering access to investors, mentors, branding and more. Rhinegeist will host A Taste of Gratitude to raise funds for IKC in hopes it will continue to serve the city’s foodies both in and out of the kitchen. 5-7 p.m. Nov. 6. Tickets start at $75. Rhinegeist, 1910 Elm St., Over-the-Rhine, facebook.com/nkyincubatorkitchen.

YES 50th Anniversary Tour at Taft Theatre
Rock & Roll Hall of Famers YES are bringing their classic prog rock to the Taft Theatre on the stateside leg of "The Album Series Tour 2022.” The tour name is apt as the band plans to play its 1972 album Close to the Edge in its entirety for its 50th anniversary. YES says the album was "widely considered one of the most defining albums, not only for YES but for the whole progressive movement," per a release from the band. And the show salutes it with a full experience. 7:30 p.m. Nov. 6. Tickets start at $44.50. Taft Theatre, 317 E. 5th St., Downtown, tafttheatre.org.