This weekend promises costume contests for humans and dogs, plus a festival devoted to coffee and another devoted to cocktails. 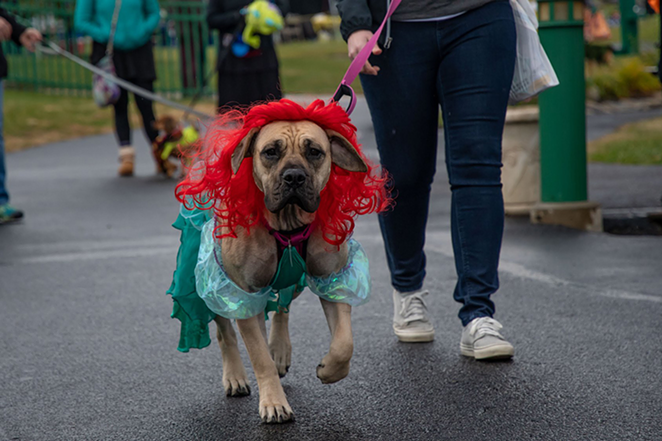 As October begins to wind down, there a still a couple of weekends left to enjoy local U-pick pumpkin patches and haunted attractions (We recently went on a real paranormal investigation of Terror Town).

This weekend also promises costume contests for humans and dogs, plus a festival devoted to coffee and another devoted to cocktails.

Here are 15 things to do in Cincinnati. (And if you don't find what you're looking for here, visit citybeat.com for other ideas like the new niteMKT pop-up or The Science Behind Pixar exhibit.) 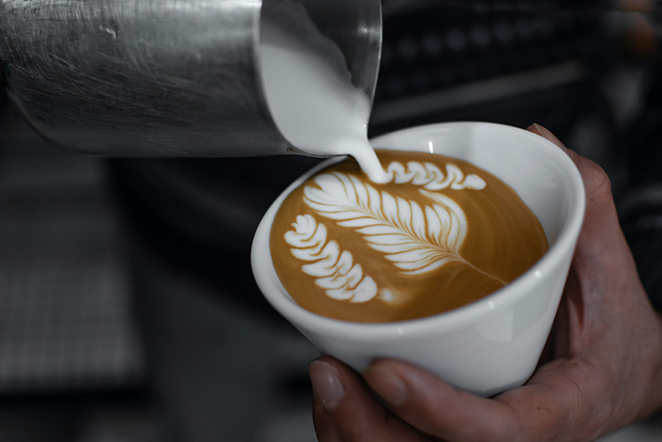 The fourth Cincinnati Coffee Festival takes over Music Hall this weekend. Labeled the "largest coffee and tea festival in the Midwest," this year's event will be broken out into five sessions (9 a.m., 12:30 and 4 p.m. Saturday; 10 a.m. and 1:30 p.m. Sunday) to help limit overcrowding. The fest will feature 50 coffee roasters, coffee and tea shops, bakers, pastry shops and chocolatiers, according to a release, along with coffee and tea vendors. Guests will be able to sample sips and snacks while also enjoying live music and fun events like latte art demos. A special VIP event on Friday includes coffee and tea cocktails, a latte art competition and food from local caterers, as well. Proceeds benefit the Ohio River Foundation. 7-10 p.m. Oct. 22 (VIP); 9 a.m.-6 p.m. Oct. 23; 10 a.m.-4:30 p.m. Oct. 24. $50.50 advance or $65.50 day-of VIP; $15.50 advance or $20.50 day-of for Saturday and Sunday sessions; weekend passes available. 1241 Elm St., Over-the-Rhine, cincinnaticoffeefestival.com.

Cincinnati continues its quest to host the 2026 World Cup and will welcome international soccer officials to bolster its chances. FIFA and the U.S. Soccer Delegation will visit the Queen City on Friday to tour Paul Brown Stadium, soccer training facilities and Fan Fest locations. While in Cincinnati, officials undoubtedly also will assess the Queen City's appetite for soccer, and local fans can help with that. Soccer fans are invited to a street festival on Walnut Street at Freedom Way, where they can enjoy free LaRosa's pizza and a beer from Moerlein Lager House. The party continues with live music until 5 p.m. At 2:45 p.m., FC Cincinnati supporters will march World Cup flags to Paul Brown Stadium via Gate D on Elm Street. Fans are invited to join the march. 2-5 p.m. Oct. 22. Free admission. The Banks, Downtown, 2026cincy.com.

Bob Mould’s latest album, Blue Hearts, seems especially urgent and confrontational, the product of a man who had to cancel a tour and put his life and livelihood on hold last spring due to a pandemic. Mould, of course, has never been known for his subtlety. The 60-year-old singer, songwriter and guitarist has been raging about what moves him for four decades now — first with the iconic 1980s Indie Rock trio Hüsker Dü and then, minus a brief two-record run in the early 1990s with Sugar, as a solo artist who has released a string of consistently stellar albums. This tour is being billed as Mould in “solo electric” mode, which means audiences will experience his voice and guitar, intimate and unfiltered. Memorial Hall requires masks as well as proof of vaccination or a negative COVID test. 8 p.m. Oct. 22. $22-$35. 1225 Elm St., Over-the-Rhine,  memorialhallotr.com.

The West End at the Playhouse in the Park

For the first time in 18 months, the Cincinnati Playhouse in the Park has a live theater production onstage. In fact, it’s a world premiere: The West End, by Cincinnati born-and-bred playwright Keith Josef Adkins. As its title suggests, his new play — commissioned by the Playhouse — is about life in a historic Cincinnati neighborhood: the West End. It is set in 1941 as the Great Migration of Black Americans from the rural South were moving north, with some people settling Cincinnati and populating an area west of Central Parkway. Grace (LaTonya Borsay) is a thoughtful, sometimes outspoken woman who owns a row house where she rents rooms to several boarders. Chloe (Shanelle Leonard) is a stylish young woman who’s an aspiring singer hoping to catch on with Count Basie’s band. Zieglar (Kevin Cristaldi) is a German descendent, a drinker and occasional handyman. Read CityBeat's review. Through Nov. 7. Tickets start at $35. 962 Mt. Adams Circle, Mount Adams, cincyplay.com. 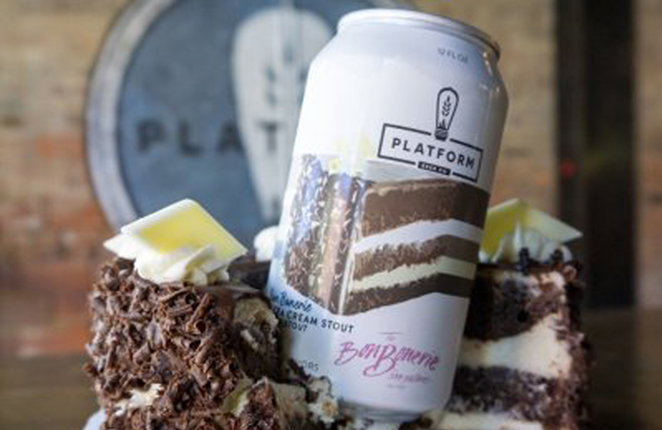 Photo: bonbonerie.com
A can of Platform Brewing's Opera Cream Stout

Opera Fest at The BonBonerie

The BonBonerie celebrates the release of Platform Brewing's Opera Cream Stout, based on their iconic cake. This fest focuses on the titular dessert with live music, raffles, samples of all of the bakery's opera cream-flavored items and more. There will be Opera Cream Stout to drink, Che Empanadas food truck and DIY flower bar Daisy Jane's Flower Truck. 6-9 p.m. Oct. 23. Free; $10 VIP tickets (include draft pours of the stout, a slice of Opera Cream Cake and five raffle tickets). BonBonerie parking lot, 2030 Madison Road, O'Bryonville, bonbonerie.com.

The Nightmare Before Christmas with Live Orchestra at Music Hall

Over-the-Rhine's notably haunted Music Hall will get an extra dose of spooky spirit this weekend, when the Cincinnati Pops screens Tim Burton's The Nightmare Before Christmas. The orchestra, conducted by Christopher Dragon, will perform Danny Elfman's cinematic score live with the film. So as Jack Skellington proclaims "This is Halloween," the Pops' woodwinds, brass and strings will play along for a robust and immersive viewing — and listening — experience. 7:30 p.m. Oct. 23 and 2 p.m. Oct. 24.  Tickets start at $25; online youth tickets are available for 50% off. 1241 Elm St., Over-the-Rhine. More info at cincinnatisymphony.org.

Celebrate the season at Washington Park during Fall Fest Weekend. Vendors will be spread throughout the park offering arts, crafts, baked goods and stuff for people and pets. Kids can enjoy a pumpkin patch and "animal encounters," says the park's Facebook page. There will also be live music. 11 a.m.-6 p.m. Oct. 23 and 24. Free admission. 1230 Elm St., Over-the-Rhine, facebook.com.

Since the start of the pandemic, the team behind Cincinnati’s Cindependent Film Festival has found ways to keep the spirit of independent films alive, even in the midst of pivots and postponements that have become a sobering reality for the arts and entertainment industry. This October, their Reels on Wheels mobile cinema trailer returns as Thrills on Wheels. Four outdoor screening events will take place throughout the month in Madisonville, Over-the-Rhine and Camp Washington. The series will feature family-friendly, independent short films that celebrate the Halloween season. Cindependent says the films are suitable for ages 6 and up. Audiences can expect light concessions, movie theater popcorn and socially distanced, picnic-style seating. It’s “BYOC,” meaning “bring your own chair,” and pets are welcome. Film blocks will be shown at 7 p.m. and 8 p.m. Oct. 23. Grant Park, 73 E. McMicken St. Over-the-Rhine. RSVP at cindependentfilmfest.org.

Head to Braxton Brewing Co.'s taproom to start investigating a murder. Teams of up to four people can help solve the crime by playing puzzles at each participating bar on this pub crawl. Ask for hints if you need them, but each team who uncovers the murderer and location of the murder will be entered to win 2021 concert tickets of their choice to shows at Newport's OVATION. Start at Braxton and then drink and discover clues at Rich's Proper, the Hannaford and Parlor on Seventh. Pick up scoresheets 6:30-7:30 p.m. Oct. 23. Free. 27 W. Seventh St., Covington, facebook.com.

Revitalization nonprofit Renaissance Covington is hosting a pop-up market on Saturday night. The Summer of Cov Night Bazar will take over Roebling Point with a variety of artisans and vendors and live performances from The Carnegie. The event encourages attendees to swing by any of the nearby restaurants — The Gruff, Eishaus, Molly Malone's, Keystone Bar & Grill, etc. — for food and drink. 6-10 p.m. Oct. 23. Free admission. Park and Court streets, Covington, rcov.org/covingtonnightbazaar.

The Howl at Voice of America Park

This canine-focused party and costume contest promises to be a howl. Voice of America Park will play host to a series of doggie events on Saturday, including an obstacle course, pet-friendly vendors, trick-or-treat trail (for humans and dogs) and a costume parade. Awards will be given to the best-dressed dog in the categories of Cutest, Scariest, Most Original, Judge's Choice and Best Duo/Group. Local rescue organization Animal Friends Humane Society will also be on hand with adoptable pets. Costume contest starts at 1:30 p.m. Noon-3 p.m. Oct. 23. $5 per dog; benefits the Wiggly Field Dog Park Fund. 7850 VOA Drive, West Chester, eventbrite.com.

For the remaining weekends in October, the Cincinnati Zoo will be undergoing a slightly spooky transformation for HallZOOween. Guests can enjoy special themed activities, including a Hogwarts Express Train Ride and Scare-ousel. Kids can bring their own bags and visit special trick-or-treat stations set up throughout the grounds, or check out Phil Dalton's Theater of Illusion magic show at 1 and 3 p.m. each weekend day. Fall-themed treats will be available, and three special costumed Fiona the hippo statues will be hidden throughout the zoo for fans to find. Family-friendly costumes are encouraged. Noon-5 p.m. Oct. 23 and 24. Included with zoo admission. 3400 Vine St., Avondale, cincinnatizoo.org.

West End art gallery and cocktail lounge Arts on the Ave is hosting a special fest devoted to cocktails. The Cincinnati Alchemy Fest includes a cocktail competition — judged by Molly Wellmann, Allie Martin, Vernon Jackson, Travis Setter and Stephen Bell — live music, DJs and art for purchase. Guests can also enjoy drinks from the "best bartenders and mixologists in Cincinnati," according to an event description. General admission includes access to the art show as well as to watch and vote in the cocktail contest. The $100 Platinum Level tickets include bitters blends, plus a chance to make your own bitters; eight drink tickets; 60 voting tickets; two T-shirts; raffle tickets; and one more unlisted surprise. 2-8 p.m. Oct. 24. $20 general admission. 2141 Central Ave., West End/Brighton, eventbrite.com.

Grab your stein and your corset: the Ohio Renaissance Festival is back. Enjoy bites from more than a dozen vendors ranging from Mediterranean eats and pizza to bourbon chicken and mac-and-cheese-stuffed bread bowls — and plenty of giant turkey legs to nom on. Snack carts are also scattered throughout the park offering beef jerky, popcorn, nuts, pickles and more. After gorging on savory dishes, you can satisfy your sweet tooth with cheesecakes, soft serve and funnel cakes. The fest has several drink stations available where you can wash it all down with some mead, cider, beer or a Coke. This weekend's theme is The Feast of Fools and will include a watermelon vs. pumpkin war. 10:30 a.m.-7:30 p.m. Oct. 23 and 24. Online tickets cost $19 for visitors 13 years and older and $7.50 for ages 5-12. Tickets are available to purchase at the front gate. Parking costs $3 per car and is cash only. 10542 OH-73, Waynesville, Ohio, renfestival.com.