From a reproductive rights protest to live music and antique shows, this weekend has something to offer every sort of Cincinnatian. 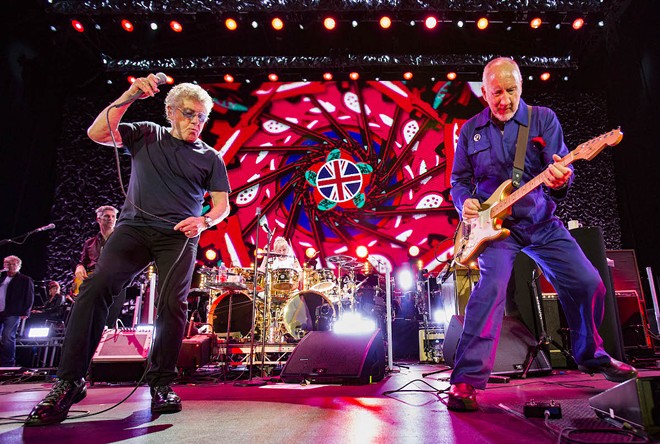 photo: Provided by LiveNation
Roger Daltrey (left) and Pete Townshend of The Who

Art in Bloom at the Cincinnati Art Museum
The Cincinnati Art Museum will welcome the spring season with the return of the popular exhibition Art in Bloom. The three-day exhibition will feature flower arrangements displayed next to complementary fine art. The exhibit, typically held in the fall, has not been active since 2019 due to the COVID-19 pandemic. The return will mark the 11th edition of Art in Bloom and will consist of more than 90 floral bouquets that will be displayed throughout the museum. Additionally, the event will include family-friendly activities and special programs that follow the floral theme. May 13-15. $12 standard admission; $6 student, senior or child; free for children under six and Cincinnati Art Museum members. 953 Eden Park Dr., Mount Adams, cincinnatiartmuseum.org. (Lauren Serge)

Float-In Movie Night at Lake Isabella
The classic drive-in movie is moving onto the water. The first in a series of “float-in” movies, hosted by Great Parks, will begin on Friday, which invites guests to watch a featured film while floating in a rowboat along the water. The event will be held at Lake Isabella, where guests can rent a rowboat and watch the 1995 comedy Clueless. The rented rowboats seat four people, and at least one of the guests in the rowboat must be at least 18 years old. Those interested must register in advance to take part in the event. A motor vehicle permit is required to enter the parks. Lifejackets and concessions will be available. 9:30 p.m. May 13. $40 rowboat rental. 10174 Loveland-Madeira Road, Loveland,  reservations.greatparks.org.  (LS)

Trauma Illinois album release show at Urban Artifact
Local Rock group Trauma Illinois acquired its name through a bit of tribulation. According to the band's website: “The name 'Trauma Illinois' was initially recommended by the iconic rock band Fall Out Boy, who were visiting Cincinnati Children's Hospital. At the time, [Trauma Illinois’] lead singer Jack Johnson was being treated in the ICU after the band suffered a near-fatal car accident. Lacking any ID, Jack was given the designation: 'Trauma Patient: Illinois.'  Upon learning of the band and Jack's rough condition, Fall Out Boy sent words of encouragement along with the phrase: ‘Trauma Illinois would be a sick band name.’” This band merges pop-punk sensibility with Led Zeppelin’s vocal sensuality and is releasing a new album White House. 7:30 p.m. May 13. $12. Urban Artifact, 1660 Blue Rock St., Northside, radioartifact.com. (SMP)

"Bans Off Our Bodies" abortion rights protest at Fountain Square
On May 2, Politico reported on a leaked draft opinion from an unidentified U.S. Supreme Court clerk that suggested a majority of the court will vote to overturn the 1973 case Roe v. Wade that legalized abortion. This weekend, Cincinnatians will have a chance to protest the potential reversal of Roe v. Wade. On Saturday, May 14, a number of organizations — including Planned Parenthood, the Women's March, Liberate Abortion, UltraViolet, NARAL Pro-Choice America and League of Women Voters — are hosting a nationwide protest called "Bans Off Our Bodies," and Cincinnati will be included. Read CityBeat's piece on the local abortion rights fight to learn more about how Cincinnati leaders and local organizations have responded to the potential reversal. The Cincinnati protest is organized by Planned Parenthood Advocates of Ohio. 11:30 a.m. on May 14. Free. Fountain Square, 520 Vine St., Downtown, mobilize.us/ppaf. (Ashley Moor)

Art And Poetry Event at Findlay Market
Findlay Market will bring art and poetry to life in its annual Art & Poetry event, sponsored by Women Writing for (a) Change and the Carl Solway Gallery. The celebration will feature spoken-word poets, interactive art and handicrafts and even a chance to compete for cash prizes. A  full schedule of the day can be found on findlaymarket.org. 10 a.m.-8 p.m. May 14. Free. Findlay Market, ​​1801 Race St., Over-the-Rhine, Findlaymarket.org. (LW)

Food Truck Rally at Shopper’s Haven Plaza
If you're looking for a place to try some yummy treats or to shake up your carry-out routine, look no further than the Loveland Food Truck Rally. On Saturday, the Food Truck Rally will return, hosted by the Little Miami Chamber Alliance. The event will include cuisine from 25 different mobile restaurateurs, like Caveman Crepes, Chicken Mac and The Poutine Machine, among others. The Food Truck Rally is a family-friendly event, with an area dedicated to children’s inflatables, face painting and more. 3-10 p.m. May 14. Free admission. Shopper’s Haven Plaza, 675 Loveland-Madeira Rd., Loveland, Lovinlifeloveland.com. (LW)

The City Flea at Washington Park
On Saturday, The City Flea returns to Washington Park to debut its first market of the year. City Flea is a curated flea market that brings dozens of vendors to Over-the-Rhine to showcase their unique products — from handmade art to antique items and plants. The organization, which formed in 2011, sets up shop once a month from May to October and fills the entire park with local vendors. Food and drink vendors will also be in attendance.10 a.m.-4 p.m. May 14. Free admission. 1230 Elm St., Over-the-Rhine, thecityflea.com. (LS)

MadTree’s One Good Party Keg Tapping
What better way to practice philanthropy than quaffing a few pints of super rare local craft beer? MadTree Brewing has partnered with Cincinnati Zoo & Botanical Garden, Adventure Crew, Cincinnati Parks Foundation and Groundwork ORV to present One Good Party, which they call a “friendly beer competition” to support the environmentally sustainable non-profits. Expect family-friendly themed attractions from all the partners, along with non-profit beers brewed with MadTree’s assistance. The exclusive kegs will be tapped as soon as the party begins, with 1% of each pint sale donated to the partners. Depending on whose beer runs out first, a winner will be announced for a year’s worth of bragging rights. There will be plenty of food and live music featuring The Cliftones, Siri Imani with Jess Lamb & The Factory, The Cereal Killers and John Gentry, with DJ Rah D spinning in between. Event begins at noon, music starts at 2 p.m. and exclusive kegs are tapped at 4 p.m. May 14. Free admission. MadTree Brewing, 3301 Madison Rd., Oakley, madtreebrewing.com. (SMP)

Y’alls Hootenanny in Covington
The new season for the Florence Y’alls baseball team will be recognized with a celebratory Y’all’s Hootenanny event, hosted by the BLDG Gallery, a creative design company. The event will consist of an art exhibition to commemorate the beginning of a new season for the Y’alls and their contribution to Kentucky culture. According to the BLDG website, the event aims to honor “the weird, wild and wonderful of everything found in the Bluegrass.” In addition to the exhibit, the celebration will include activities such as a bouncy house and wiffle ball, as well as performances by the Harrison Pedigo Band. Local food and drink vendors will be in attendance. The celebration will lead up to that day’s Florence Y’alls game against the Tri-City ValleyCats, with first pitch at 6:36 p.m. The art exhibit will be available through June 3. Noon-5 p.m. May 14. Free admission. 30 W. Pike St., Covington, bldgrefuge.com. (LS)

The Who at TQL Stadium
The Who is returning to the Cincinnati stage on Sunday, marking the band’s first local performance since Dec. 3, 1979. On that day, a tragedy at Riverfront Coliseum occurred that left 11 fans dead due to a violent rush of attendees. The iconic rock band was set to make its return to Cincinnati in April 2020 but the performance was canceled due to the COVID-19 pandemic. Now, the band will finally perform in Cincinnati for the first time in 43 years. The Who will donate to the P.E.M. Memorial, a fund dedicated to the local lives lost during the 1979 tragedy. 7:30 p.m. May 15. TQL Stadium, 1501 Central Pkwy., West End, thewho.com. (LS)

Bird Migration Field Trip at Spring Grove Cemetery and Arboretum
With the peak of bird migrations beginning in mid-May, the Lloyd Library and Museum is hosting a public Bird Migration Field Trip to observe the various birds on their migration paths. According to the Lloyd Library and Museum website, the field trip primarily will focus on migrant songbirds — namely warblers — while walking through the cemetery. The library’s co-leaders, Denis Conover and Jack Stenger, will lead the walk, inviting participants to view and listen to the birds. The walk will begin at Spring Grove Cemetery’s main entrance. Water, sunscreen and binoculars are recommended. 8 a.m.-noon May 15. Free admission. 4521 Spring Grove Ave., Northside, lloydlibrary.org.  (LS)

Antique Show at Boone County Fairgrounds
The Burlington Antique Show will bring prized possessions and vintage items once again to the Boone County Fairgrounds this Sunday. The show, which has operated for more than 40 years, will showcase more than 200 vendors, who will sell their special antique collections. The show will continue throughout the summer on the third Sunday of each month through October. Eager buyers can get early-bird admission at 6 a.m. for $6. 6 a.m.-3 p.m. May 15. General admission $4; free for children under 12 . Early-bird admission from 6-8 a.m. $6. 5819 Idlewild Rd., Burlington, burlingtonantiqueshow.com (LS)