After three challenging years for theater companies — a shutdown caused by the COVID-19 pandemic, ongoing threats by viral variants and reticent audiences unsure about returning to live performances – 2022 has seen an upswing, with most Cincinnati theaters returning to some form of regular programming.

The year got off to a strong start in January with Cincinnati Shakespeare Company’s production of August Wilson’s Ma Rainey’s Black Bottom. Torie Wiggins gave a searing portrait of the 1920s jazz singer in one of Wilson’s great plays about the struggles of Black life in the 20th Century. Cincy Shakes followed that with an unusual rendition of Shakespeare’s Hamlet starring Sara Clark, one of the company’s veteran performers. She triumphed in the iconic role, playing Hamlet as if the character were a woman and not merely an actress taking on a male role. Spring wrapped up with a remount of Kate Hamill’s adaptation of Jane Austen’s Pride & Prejudice in May and June, a popular production that had been cut short by the onset of COVID-19 in March 2020.

For the Cincinnati Playhouse in the Park’s final season on the Marx Stage, there was a heartwarming comedy, Incident at Our Lady of Perpetual Help by Katie Forgette, in February. In May, Jocelyn Bioh’s School Girls; Or, The African Mean Girls Play, was the last production in that theater. The Marx will be replaced by a new mainstage, Moe & Jack’s Place – The Rouse Theatre, which is set to open in March 2023 with a production of the Tony Award-winning musical A Chorus Line.

As always, D. Lynn Meyers, Ensemble Theatre Cincinnati’s thoughtful producing artistic director, assembled a collection of shows that inspired introspection and conversation. Queen by Madhuri Shekar in February and March explored ethics in scientific research about bees. In April, the theater that brings many new works to Cincinnati theater lovers offered a double bill: Isaiah Reaves’s I Shall Not Be Moved, about his grandmother who was a Freedom Rider, and Your Negro Tour Guide by late writer and CityBeat columnist Kathy Y. Wilson. No one knew, of course, that Wilson’s voice would die just a few months later, but we should all be grateful for ETC’s presentation of her powerful, opinionated words in this one-woman show. Meyers’s string of great works continued in September with a production of Lynn Nottage’s Pulitzer Prize-winning script, Sweat, a tough drama about unemployment and economic decline in contemporary America.

Northern Kentucky University’s YES Festival, the oldest college new-play festival in the United States, offered three plays in April, including Keeper of the Realm, a new script by ETC’s Meyers produced at Covington’s Carnegie Center. Other new works by Jared Michael Delaney and Samantha Oty were presented on NKU’s campus, as well as staged readings of scripts by Sage Daman and Richard Klein.

Touring shows offered by Broadway in Cincinnati – including several that were postponed by the pandemic – finally made it to the Aronoff Center. Ain’t Too Proud, the story of The Temptations, had strong attendance in March and thrilled fans of that legendary Motown group. Over the summer, The Band’s Visit, an unusual Tony Award winner about an Arab police band stuck in a remote Israeli town, was here for just a week, but it was an opportunity to see one of the finest Broadway plays in recent memory. The long-awaited return of Lin-Manuel Miranda’s Hamilton was here for four sold-out weeks in September.

Summer began with the nineteenth iteration of the Cincinnati Fringe Festival, back in full force after two years of largely virtual presentations. This time around, the Fringe organizers at Know Theatre hired Katie Hartman, a veteran touring artist who performed in several previous festivals, to orchestrate two weeks of inventive, off-beat theater. She brought a jolt of energy as well as intentional inclusivity for both tour performers and audiences.

Covington’s Carnegie, headed by artistic director Maggie Perrino, put together an ambitious repertory season of musicals, kicking off with a pair of Tony Award winners in June: Jonathan Larson’s Rent and Stephen Sondheim’s Into the Woods. Performances of those continued in July and August, joined by a third offering in August, George Remus – A New Musical, about the infamous and notorious bootlegger, by local playwright Joe McDonough and the composing/lyric writing team of Janet Yates Vogt and Mark Friedman. At summer’s end, Perrino announced her departure from the Carnegie to become the artistic director of the Cincinnati Public School’s School for Creative and Performing Arts.

As the Cincinnati Playhouse completed construction of its new mainstage, it chose to present fall productions on various stages around Greater Cincinnati. The first of these, in September and October, was a stage adaptation of Agatha Christie’s Murder on the Orient Express at the Aronoff Center’s Jarson-Kaplan Theater, featuring a beautifully detailed set that took attendees onto the luxurious train.

Two more Playhouse productions landed in Covington and Price Hill. Vanessa Severo’s one-woman show (performed by the playwright) Frida … A Self Portrait captivated audiences at the Carnegie in October and November with an inventive retelling of the life of Mexican artist Frida Kahlo. In November, Benjamin Scheuer’s The Lion found its way to the Warsaw Federal Incline Theatre. A one-man performance, Max Alexander-Taylor brought to life a young guitar artist working to navigate a troubled relationship with his family. He dazzled theatergoers with his virtuoso guitar playing. 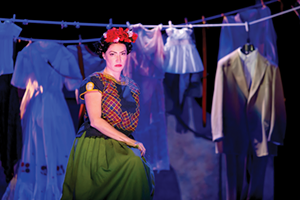 Photo: Mikki Schaffner
Vanessa Severo as Frida Kahlo in Frida...A Self Portrait at Cincinnati Playhouse in the Park

Audiences also found their way to excellent offerings by some of Cincinnati’s fine community theaters. A few worth recalling began in March with the Drama Workshop’s production of Steve Martin and Edie Brickell’s Bright Star, set in the Blue Ridge Mountains of North Carolina in the 1940s. The Cheviot company also presented the fifth iteration of its “Home Brew” series, ten short plays by local writers, followed by a reception with a local brewery. Cincinnati Music Theatre, one of the city’s most ambitious companies, staged Wonderful Town, a splashy 1953 musical with a Leonard Bernstein score, in November at the Aronoff’s Jarson-Kaplan Theatre, CMT’s home since 1995.

There was lots to see in 2022, and there’s more coming for 2023. For a mid-sized city, Cincinnati is blessed with an exceptionally varied theater scene — something for everyone.