Catch that powder right near your own neighborhood. 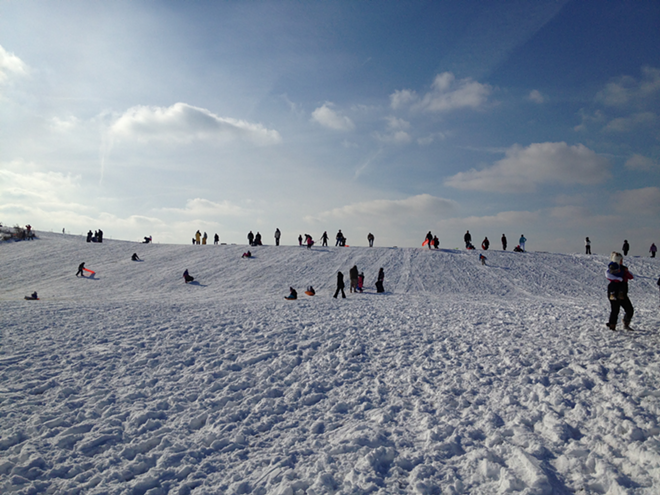 Yes, Mother Nature’s frosty grip has taken hold of the Midwest this week. And after a rather stressful year and the start of yet another one, some whimsical winter fun is just what the doctor ordered.

Greater Cincinnati’s hilly terrain makes it a great city for sledding — in the rare chances we get enough snow to truly enjoy it — and there are plenty of tried-and-true local favorite spots to explore.

Here are five top-notch sledding destinations in Greater Cincinnati that aren't far from your neighborhood:

For a more scenic route of the slopes, the bountiful hills of Devou Park offer a comprehensive overlook of Covington and Cincinnati. Sledders can view the snow-topped skyline and frozen woodlands while they coast down the hills of the 700-acre park. Just watch where you're going and don't be "stupid" if you hit a tree, as this homemade sign urges. Devou Park, 1201 Park Drive, Covington.

Otherwise known as the “Chill Hill,” Voice of America Park is considered a staple of many local sledders’ childhoods. The man-made hill offers high elevation for an adrenaline rush as well as smaller hills to ease into the fun. Whether it’s a first-timer’s rite of passage or a sled veteran looking to recapture fond memories, this chill hill will definitely be a hotspot during this weather. 7850 VOA Park Drive, West Chester Township.

This park was once the homestead of Robert Bowler, 19th-century entrepreneur and former mayor of Clifton, but it is now one of the busiest places of the season for its sledding hill. The park’s steep landscape also offers a historic backdrop to set the sledder’s winter worries adrift. 700 Lafayette Avenue, Clifton.

Stanberry Park is self-described as “one of Cincinnati’s premier sledding hills,” a longstanding title that has since gone unchallenged. Surrounded by snow-covered trees, the hill offers a nature-focused experience to share with other local sledders. Expect the snow-white landscape to be dotted with colorful sleds throughout the afternoon. 2221 Oxford Avenue, Mt. Washington.

This West Side park offers rolling hills for those chasing an adrenaline rush. Given enough speed and traction, sleddrs can bob up and down the series of low hills for an amusement park-like thrill. If they get too cold, they can take a brief refuge in the park’s stone shelter that offers a clear view of the frosted shallow lake. 4450 Rapid Run Road, Price Hill.

And while most stores are sold out of traditional sleds (along with bread, milk and toilet paper), you can easily make your own with items around the house. Here’s some ideas.