Do you remember when these happened? 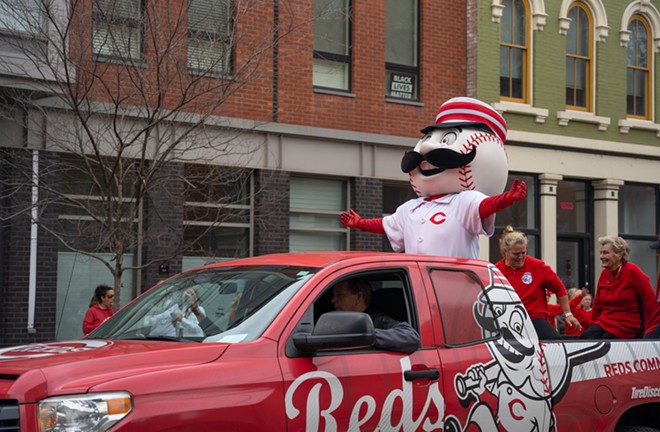 Photo: Casey Roberts
Mr. Red may have been excited in April, but the Cincinnati Reds have since tanked the 2022 season.

The Cincinnati Reds' 2022 season won't be one that fans or players will want to remember forever. Yes, there have been a few brilliant or funny moments, and individual players have tried to fill the big gaps that trades have wrought. Overall, though, this season is a dud, and CityBeat already is looking forward to the wackiness that 2023 will bring with all teams competing each other at some point. For now, though, check out the moments that linger in CityBeat staffers' minds.

What does Joey Votto  mean to the Cincinnati Reds? Plenty. For any team, a player who has been around for long time – who consistently produces (even during off years), who coaches and uplifts rookies, who keeps learning and who just generally sets a good example – is a pillar. They're someone to build a team around. They're someone whose advice and observations are vital. They're someone whose tangible and intangible contributions are priceless. For the Reds, that player is Joey Votto, who was drafted by the team in 2002 and saw his first major-league game for the franchise in 2007. The man has played his entire career in a Reds uniform while reaching big-time club and league milestones, stepping up when other players would dip. Hell, he's a future Hall of Famer, according to multiple baseball experts. Despite Votto's efforts, the Reds already were faltering this year when his nagging body finally screamed for help, culminating in season-ending rotator cuff surgery on Aug. 19. Going into the Oct. 4 game with the Chicago Cubs, the Reds have been 15-28 since Votto's departure. Sure, Votto is projected to be healed in time for spring training and the 2023 season, and sure, Votto's wisecracks in the broadcast booth have been fantastic. But the Reds obviously are stumbling without the team's heart in a major way. Read CityBeat's story about one of Votto's memorable exploits in the broadcast booth.


Frolicking in the corn

For a moment, a nice game of baseball was all that mattered. The Field of Dreams game – which pays homage to the 1989 Kevin Costner film of the same name – itself didn't go so well for the Cincinnati Reds – the Chicago Cubs beat Cincinnati 4-2 – but there were plenty of magical moments in Dyersville, Iowa, on Aug. 11 that made players and fans alike marvel about baseball's ability to transcend almost everything. From the moment Ken Griffey Jr. walked out of the cornfield and asked his father Ken Griffey Sr. to "have a catch," fans in the stands and watching from home were caught up in the sport's magic. Then the Hall of Famers appeared, guiding greatness and passion just like the ghosts of the old-timers did in the film. The Reds and Cubs both played in throwback uniforms, inspired by the 1919 and 1929 seasons, respectively, and paying homage to historic teams that came before. And for a few glorious moments before first pitch, the Intense, competitive players on both sides visibly became like kids again, beaming while reminiscing about tossing a ball around to their best friend or a family member in the backyard. Say what you will about front-office faults or inflated contracts or various scandals; it's all important. But that feeling of wonder, of comfort, of dreaming when you're on a dusty field with a few bags? That is, too. Read CityBeat's recap of the Field of Dreams game experience.

Cincinnati Reds starting pitcher Luis Castillo was sizzling. During the July 27 game against the Miami Marlins at Great American Ball Park, Castillo – the Reds' sole All-Star Game participant – threw eight strikeouts over seven innings. During the previous four games, he threw up 33 Ks, including 11 against the Chicago Cubs on June 28. But his tenure with the Reds was coming to a close. He knew it. The team knew it. Fans knew it. Sure enough, the front office sent Castillo to the Seattle Mariners for prospects just a few days before the season's trade deadline and just two after his hot start against Miami. Since the trade, Castillo has continued to be a strikeout machine for the Mariners, notching five or more Ks in every game but one. Cincinnati rookies like Hunter Greene and Nick Lodolo largely have risen to the occasion – even as they build endurance and control – but the absence of a bona fide veteran starter like Castillo is a mark against the Reds. Read CityBeat's story about the trade that sent Castillo packing.

By late April, the Reds had only won three games and fans were understandably distraught. But suddenly, a hero appeared – only it wasn't a player on the field. During a home game on April 26, Jacob Kingsley caught a pop-up foul ball while holding his infant son Shepherd, who was strapped to Kingsley's chest in a baby sling. During the fifth inning, San Diego Padres catcher Luis Campusano popped up a 1-2 pitch from Reds pitcher Jeff Hoffman. The ball blooped backwards on the third-base side, where Kingsley nonchalantly reached up with one hand and plucked it from the air as he fed little Shepherd a bottle. It was the play of the game — and probably even the season at that point (the Reds lost 9-6 to the Padres). Not to be outdone, another fan at Cincinnati's Great American Ball Park caught a ball in his beer cup about a month later. Both men made the national highlight reels and helped dour Reds fans through a major team drought. Read CityBeat's story to watch Kingsley's spectacular grab.

The 2022 season hasn't been very kind to the Reds. That doesn't mean the team hasn't set some records – they're just not necessarily the kind of records that the team or fans actually want. After MLB team owners and players ended a lockout by coming to terms on a new collective bargaining agreement, the Reds began their march into a horrible season. After a loss to the Colorado Rockies on May 1, Cincinnati's home team set a franchise record for the worst start to a season, going just 3-19 at that point. It also was MLB's worst start for any team since 2003. The Reds were averaging well over a week between wins at the time, and the team did not win a full series until it swept the Pirates in four games May 6-8. Cincinnati notched a somewhat better milestone when it beat the Chicago Cubs on May 26, becoming  the team with the worst record through at least 30 games to score 20 or more runs in a game (the Reds conquered the Cubs 20-5), improving to 14-30 overall. But the team added another mark to the record books in September when the Reds lost to the Boston Red Sox. On Sept. 20, starting pitcher Nick Lodolo nipped three Sox batters and helped Cincinnati set the MLB record for the most hit opponents in a single season – 99 batters at the time, claiming the previous record from the Chicago Cubs, who had hit 98 players in 2021. Read CityBeat's story about Cincinnati's version of bean ball.

As the Reds go into the Oct. 4 game hosting the Chicago Cubs – the second-to-last battle for the season –the reds are sitting on a 61-99 record, with a win percentage of just .381. The Reds were eliminated from post-season contention way back on Sept. 13. Cincinnati hasn't won its division since 2012. Nobody is happy. Not fans. Not players. Nobody. The 2022 season's woes – all of them – ultimately can be traced back to team ownership and the front-office. Fan enthusiasm and trust have been waning since the Reds lost free agents like 2021 All-Star outfielder Nick Castellanos during the offseason and traded away big contributors like outfielder Jesse Winker, third baseman Eugenio Suárez and pitcher Sonny Gray. Just before the start of the season, Reds owner Bob Castellini said that he wanted to concentrate on developing younger players, and the team has indeed cut payroll. Feeling betrayed and fearing that 2022 would not be a legitimate push for playoff glory, some fans raised more than $4,000 ahead of Opening Day for a billboard urging Castellini to sell the Reds to someone who would invest in winning. That I-75 billboard and fans' growing lack of trust in the team elicited a sharp response from the Reds' chief operating officer – and Bob Castellini's son – Phil Castellini, who told 700 AM WLW radio that Cincinnatians essentially just have to deal with it when the team repeatedly refuses to pay for productive veteran players. Phil Castellini later walked back his comments.  This summer, the team continued the fire sale by trading starting pitcher Luis Castillo, outfielder Tommy Pham, outfielder Tyler Naquin, starting pitcher Tyler Mahle and infielder Brandon Drury. It all culminates in the very real possibility for a 100-loss season and even less fan trust going into 2023. Read CityBeat's story about the Castellini saga.