The park encourages people to stop and play colorful, hand-crafted instruments that include everything from a wooden bass marimba to drums repurposed from propane tanks. 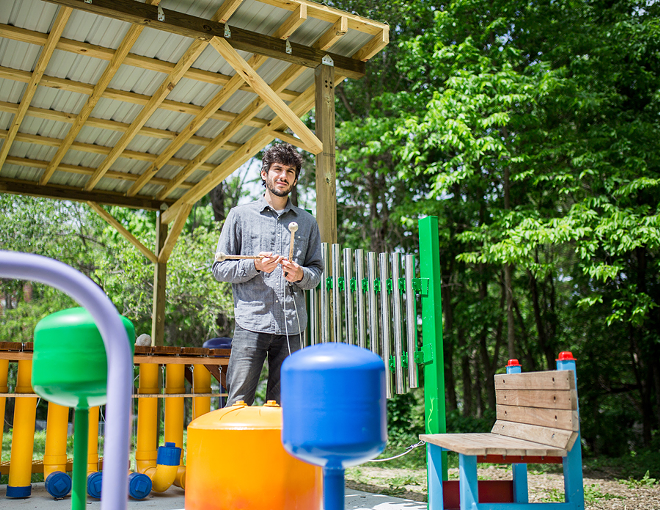 Photo: Hailey Bollinger
Ben Sloan
Just as there have been such recreational innovations as skateparks and bike trails in recent years, there are now “outdoor musical instrument” parks — places that encourage people to come and play music for awhile.

Some are “percussion parks” with such built-in instruments as marimbas, chimes, cymbals, tuned drums and vertically arranged pagoda bells. One company, Colorado’s Freenotes Harmony Park, claims to have provided such “perfectly tuned sound sculptures” in all 50 states and on five continents.

One thing that makes Cincinnati’s new Percussion Park so special is its neighborhood location in a previously vacant lot at the corner of Warsaw and McPherson avenues in Price Hill. It serves as a notable sign that the low-income neighborhood, with its history of West Side conservatism, now is embracing progressive ideas about the arts. That comes as a nonprofit community development corporation, Price Hill Will, works to improve the quality of life for its residents, many of whom are minorities, including families from Central America and Mexico.

Equally impressive is the fact that Percussion Park is the idea of a local 28-year-old Cincinnati musician, Ben Sloan, who created it in true labor-of-love DIY style by making the instruments. A Northside resident, Sloan is a drummer with a degree in Jazz Studies from the University of Cincinnati’s College-Conservatory of Music. He has toured with the band WHY? and also teaches percussion to students preparing to join Price Hill Will’s innovative MYCincinnati free youth orchestra, begun in 2011 and the subject of citywide acclaim.

During Percussion Park’s recent dedication ceremony, Sloan told the assembled crowd, which included members of the MYCincinnati-affiliated Percussionistas group and their families, “This is so fresh, so new to the neighborhood. Who knows what the lifespan is? I hope it’s forever.”

That opening day was one of inclusion and celebration. The colorful instruments beckoned to passersby. They included a wooden bass marimba, with blue-capped yellow PVC-resonators and attached mallets donated by a British manufacturer of outdoor musical instruments, Percussion Play; several drums repurposed from propane tanks and with cut-out “tongues” for pitch control, plus one larger piece adapted from an old bronze water heater; a vertical vibraphone, or hanging chimes, consisting of gleaming stainless steel tubes; and a large stainless steel mixing bowl, suspended upside-down from a purple repurposed bike rack, that functions as a low-pitched gong. All were affixed onto a concrete pad; some were underneath a pergola. A cedar-chip pathway had been created to lead to the instruments from the sidewalk.

Children from the Percussionistas, part of MYCincinnati’s pre-orchestra training, sat on their plastic orange buckets and banged out rhythms with their drumsticks. They engaged in call-and-response with Sloan, their teacher. A talented 10-year-old, Rhianna Turner, played the bass marimba. Sloan, himself, played a short set with close friend Adam Petersen and vocalist Sheldon Belcher. And musician Jennifer Simone built an ecstatic groove through first recording herself playing the percussion instruments, then looping that sample while she still played live. The crowd danced, took pictures and joined in playing. 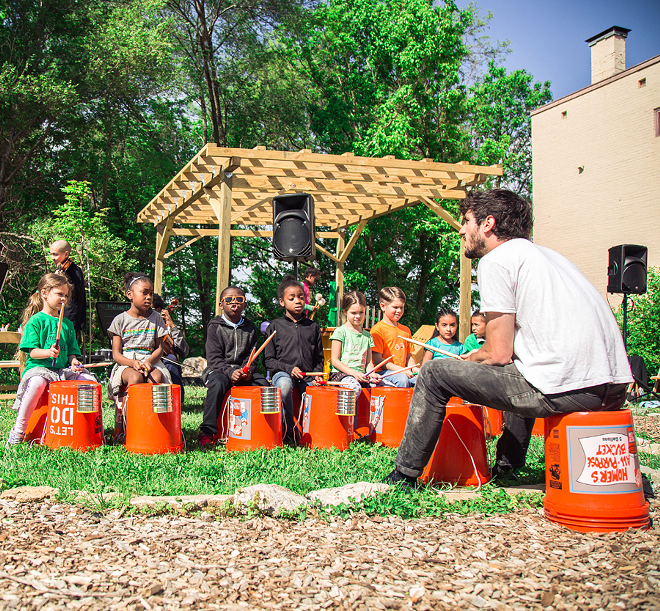 “I think it’s really cool to have a place to go outside and still play instruments,” says Rhianna, who plays violin in the youth orchestra. “Ben has tried really hard to get Price Hill to have music.”

Another youth orchestra violinist, 17-year-old Kalla Ervin, says, “I think it’s a brave idea to put something  new in this area. You’re waiting for the neighborhood to have a spark creatively, for people to express themselves musically.”

Sloan’s idea for this park had humble origins. “The mom of a very close friend sent me this video featuring an 8- or 9-year-old boy playing a 5-gallon bucket with his foot,” Sloan recalls during a subsequent interview. “And he had a kick-drum pedal so he could play it like a normal bass drum. A couple of paint cans were mounted, as if they were toms, and it really resembled a drum set.”

Sloan got a kick out of watching it. But he also had a revelation.  “The formation of it allowed for you to be playing a drum set that was outside,” he says. “So I had an idea for a percussion park that was essentially an outdoor drum set. But through a lot of research, I realized that getting parts for the mechanical things just wasn’t feasible. They were too delicate and that kind of metal would rust. So I started thinking how I could build something outside for kids to play.”

Actually, that revelation didn’t come in isolation. There’s been a larger cultural and academic awakening to the importance of percussion instruments. Classical music ensembles — groups like So Percussion, Bang on a Can, nief-norf and CCM’s own Percussion Group Cincinnati — have developed sizeable followings. (Percussion Group Cincinnati’s Russell Burge was one of Sloan’s teachers at CCM.) And the movie Whiplash popularized drumming.

“I think it’s happening because rhythm is really awesome, really exciting,” Sloan says. “I want percussion to be at the forefront. The first thing MYCincinnati students get is percussion, before they start playing violin or viola or cello. Partially that’s to instill some rhythmic sensibility in them. Rhythm as a tool is really valuable.”

Sloan adds that percussion musicians also have a long DIY tradition. “Indigenous cultures all over the world have used whatever is around,” he says.

In early 2016, Sloan set out to make Percussion Park a reality. He first thought of Price Hill as a location, since he knew the families of students he taught.

“This neighborhood could have some more vibrancy, so I thought it would be nice to plant it here,” he says. (Locally, there are already some musical instruments in Washington Park’s children’s area, and Smale Riverfront Park’s foot piano is an attention-getter.)

Using a two-year grant from the Local Initiatives Support Corporation, she had been trying to integrate the support of arts and culture into her organization’s structure. In Price Hill Will’s comprehensive vision for neighborhood revival, art activities are considered a good use.

“Price Hill Will tries to approach community development in a holistic way, realizing that it doesn’t happen in a bubble just by doing housing,” Jekel says.

So when Sloan presented his idea, she was immediately supportive. “We like supporting great things that are happening in the neighborhood,” she says. “When people come to us with great ideas, we want to do anything we can on our end to have something amazing like that in our neighborhood.”

Sloan wrote a proposal to People’s Liberty and received a $10,000 grant.

“Juries of community members decide what People’s Liberty funds (and) we’re glad they chose Ben’s project,” says Eric Avner, People’s Liberty’s CEO, by email. “We saw the same potential as the jury, that Ben wanted to share his passion and expertise in percussion with the community. He created strong relationships with the neighborhood, specifically through Price Hill Will and MYCincinnati, so he’d have some help implementing his bold plans.”

There was available space, too, because Hamilton County’s land bank was holding a spot that Price Hill Will thought crucial because it was in the business district, according to its executive director Ken Smith. Keep Cincinnati Beautiful, working with students at UC’s  College of Design, Architecture, Art and Planning and with Human Nature, a landscape architecture firm, was caring for the large, sloping lot through a program called Vacant Lots: Occupied.

With the groundwork in place, Sloan turned to a network of family and friends for help. Although his parents divorced when he was very young, he visited his father, Stephen Sloan, in Virginia regularly. The elder Sloan had extensive woodworking experience and available lumber, so father helped son with the wooden instruments.

Yet Sloan knew he needed metal instruments, too. But he didn’t know much about making those. His $10,000 budget precluded buying manufactured ones; he wanted to be eco-conscious and reuse and adapt existing objects. Fortunately, a friend was ceramist Mauri Moskowitz, whose family has owned a scrapyard in Saint Bernard for 116 years. And that company is artist-friendly — Moskowitz keeps her studio there.

She invited Sloan to tour and take what he wanted. “He was really blown away — he saw a bunch of shapes and was full of ideas for how all this metal material and recycled stuff would make sounds,” Moskowitz says. “He’s definitely the kind of person that walks around with beats on his fingers all the time. He just taps everything and is looking for a new sound.”

Since he had never actually worked metal, he turned to the sister of his closest friend and fellow percussionist, Adam Petersen, for help. Anna Petersen is an artist specializing in metal sculpture who knows welding well — her thesis project at Columbus College of Art & Design involved found scrap metal.

“Any of the fine tuning, making things sound the way they should, was up to him,” Anna says. “For me, the work was structural — I had a heavy hand in the bases made for each of the instruments, and anything that involved the welding was all mine as well. But he helped with the grinding, the taking away of rust and old paint.”

Sloan also had support from his stepfather, Matt Kotlarczyk, a rehabber and noted Cincinnati sculptor. He used Kotlarsczyk’s Northside studio to store and assemble his percussion creations. Kotlarczyk himself had been a drummer in a band when he first met Sloan’s mother after she and her son returned to Cincinnati from Virginia. (Sloan’s mother is Tamara Harkavy, founding director of ArtWorks.) Sloane credits Kotlarczyk with getting him interested in drumming in the first place, and at the Percussion Park opening he dedicated his accomplishment to his father and stepfather.

“I’m so glad he’s constructed this combo of visual and performing art,” Kotlarczyk says. “To be standing there and seeing what he was dedicating to me and his dad, this extraordinary body of work that he feels such a connection to — I couldn’t ask for more.”

Now that Percussion Park has been open a couple weeks, there is more work to be done. Two wooden tongue drums were damaged, possibly intentionally, shortly after the opening and Sloan has removed them for repair. That doesn’t perturb him.

“My expectation going in was these have a limited lifespan,” he says. “But somebody’s going to love it while it’s there and have a good time playing it.”

And he’s planning how to keep Percussion Park vibrant and exciting. Quite a bit of space is still vacant in the lot, and he can see some kind of amphitheater there for percussion performances. “Maybe there will be commissioned work from some older artists working in Cincinnati to utilize that set of instruments and we’ll tie it in with my class,” Sloan says. “But my first goal is just to have a presence there. My plan is to be there a lot. I want to be there on Saturdays for a few hours — just set up my drum set and play with people, give lessons if they want, or just have conversations.”

Quite literally, he will be beating a drum for the role of arts in Price Hill’s future.