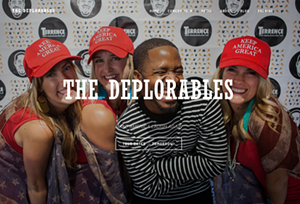 Photo: Screenshot of deplorableshow.com
Look at those hats! "KEEP" America Great! Because Trump made it great! How do they come up with this stuff!

The Deplorables Tour — featuring, according to noted comedy tastemakers Fox News, “one group of conservative comedians who are excellent” — is coming to Cincinnati. The self-avowed right-wing comedians will be at Taft Theatre on March 15 for a 7:30 p.m. performance.

The performers on the tour are Steve McGrew  (according to the email blast announcing the show, he’s “the hell-bent southerner featured on Comedy Central and Serius XM"), Terrence Williams (“comedian, commentator and viral internet sensation”), Michael Loftus (“1 Hour special on Comedy Central, HBO, Fox & Friends”) and The Deplorable Choir, which is apparently an “outrageous singing girl group with hundreds of thousands of YouTube followers.”

Judging from the first page of deplorableshow.com, the comedic artists are very good at funny — it says “Make America Laugh Again,” right there, on the opening page! That’s like what Trump says!

Meanwhile, on their @deplorableshow Twitter page, the troupe shows off its meme skills, with one featuring that “clueless nitwit” Alexandria Ocasio-Cortez with the caption, “There is no reason we can’t have free electoral college for all.” This is funny because the new congressional representative totally got a fact wrong about something and so she is not smart and probably thinks that colleges (like, the schools) are the same thing as the electoral college.

Williams also recently posted the most hilarious video ever, featuring himself talking over a different video of that congresslady who disrespected the President by calling him a motherfucker, teasing her with hilarious jabs as she runs scared from press cameras and saying stuff like, “Why you runnin’? Trump wouldn’t've ran. Runnin’ like a little scaredy cat.” SCAREDY CAT! OH NO HE DIDN'T! You can't get that stuff from your lib-dummy comedy shows with the Jimmy Fallons and the Kevin Nealons!

Just stock up on Depends adult diapers before the show, because this is pee-your-pants-all-night stuff!

For more examples of comedy at its right-leaning finest, click here.