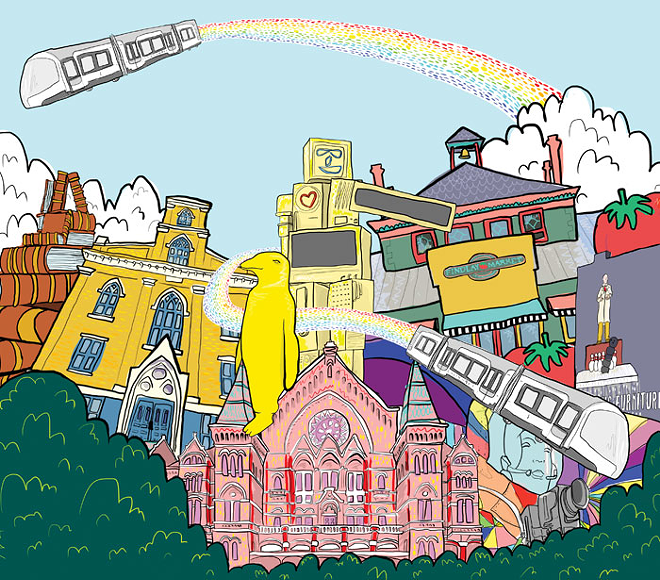 Read more about the Cincinnati streetcar:

The new Cincinnati streetcar — officially called the Cincinnati Bell Connector — is inaugurating its service on Friday, Sept. 9, so we've dedicated this week's issue to explaining where it came from, cool stuff you can see along the route, where to celebrate the grand opening and, if you're mad about it, how to stay that way.

On Aug. 30, the streetcar website cincinnatibellconnector.com posted images of the streetcar’s new look, with sponsor Cincinnati Bell’s blue-and-green graphics on the front, back, top and interior of the vehicles.

The organizations responsible for the streetcar — the city, which owns it; manager Southwest Ohio Regional Transit Authority (SORTA); and TransDev, the operator — were not able to release information pertaining to official opening-weekend activities by this issue’s deadline, but recently announced that riding the streetcar will be free throughout opening weekend. Watch for additional info online.

It will be a big and busy weekend, however. SORTA is operating a free downtown bus circulator for the streetcar’s grand opening weekend. It will stop at specially marked bus stops near streetcar stations to handle overflow from the streetcar service.

And just about everyone with a stake in downtown and Over-the-Rhine is planning something special. On Aug. 30, Downtown Cincinnati Inc. posted an extensive list of events, sales, restaurant specials and more at downtowncincinnati.com.

•  ArtWorks will offer a Streetcar Mural Tour from 6-7 p.m. on Friday aboard one of the streetcars.

•  The National Underground Railroad Freedom Center at 50 E. Freedom Way is offering a two-for-one price on admission to anyone who mentions the streetcar, which passes near it.

•   Especially interesting will be the programming at downtown’s Main Library, itself a prominent stop on the route of the Cincinnati streetcar. The institution is launching several free events — an exhibit as well as lectures — to mark the opening of service by this brand new yet also very old mode of public transit.

•  At 4 p.m. on Sept. 9, the library begins a new exhibit in its atrium called Cincinnati Transportation: Past, Present and Future. At 1 p.m. on Sept. 10, Genealogy & Local History Department Manager Patricia Van Skaik offers a presentation on the lives of Cincinnati’s early streetcar workers, featuring those with descendants still living in Cincinnati. It’s called “It’s a Family Affair: Cincinnati’s Early Streetcar Drivers, Conductors and Mechanics” and occurs in the Reading Garden Lounge. Among those Van Skaik plans to discuss is Charles Henry Rogers, a Cincinnati streetcar driver in the early 20th century whose great-grandson, Carl Harmon, will be one of the new streetcar’s drivers.

•  While the library’s address is 800 Vine St., the streetcar stop for it is on Walnut Street. There is an entrance to the library on Walnut as well as Vine Street. The Main Library is part of the Public Library of Cincinnati and Hamilton County system.