The Caravan Traveling Sound Studio, a renovated and whimsically decorated Ford van, attempts to recreate the magic that happens in moments of musical discovery. 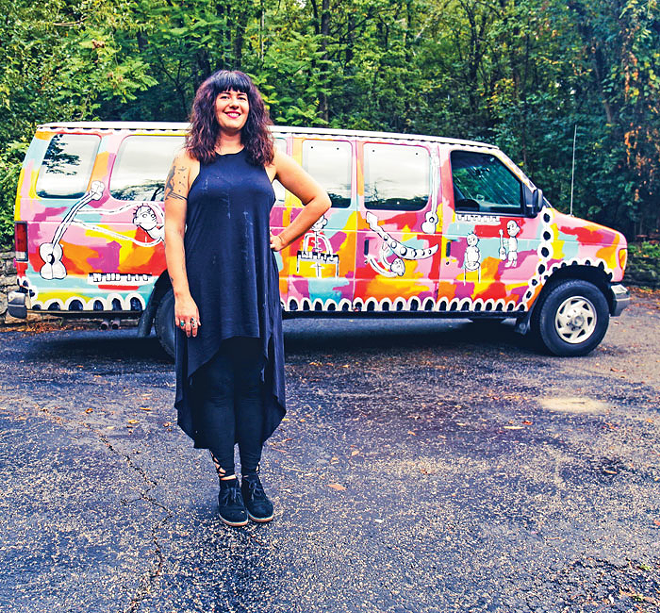 A renovated Ford van long enough to be taking a sports team to the airport, with four windows on each side, it’s painted in a whirl of bright colors and has a childlike cartoon figure in the middle whose arms extend outward like fluid necks on a guitar. There are also what appear to be painted electrical outlets, each with stick-figure extensions that seem to be waving as if conducting an orchestra.

It’s designed to make you take notice and to wonder what might be on the inside of anything that could look this strange. The interior does not disappoint. There is space for recording equipment, cozy seating and bohemian accessories like tapestries and patterned pillows. Her music-making props include, in her words, “exotic and unique world instruments” like a three-stringed Japanese samisen, accessible yet intriguing acoustic percussive instruments like a “waterphone” and “futuristic, digital, button-push” musical tools.

All this is designed to make her mobile studio as enticing and comforting for novices as for experienced musicians. That’s the whole point of the Caravan Traveling Sound Studio project.

The seeds for the concept were planted during a chance interaction with a little girl last fall.

Alongside several other local lady rockers, Caplan was participating in a program called “Rock Shop for Kids” during Ladyfest, the female musician-centric music festival that had its inaugural weekend in October of last year. A quiet girl showed interest in the instruments set up at Northside’s Happen, Inc.

“She was vocally very shy and didn’t really talk,” Caplan says. “She was kind of trepidatious. But I invited her over to a guitar stack, and said, ‘Do you wanna play?’ She just looked at me and nodded.”

The guitar dwarfed the girl, who Caplan estimates to have been around 6.

“I turned on the (amplifier) for her,” Caplan says, “and she strummed this loud open chord and immediately started hysterically laughing. She said, ‘I can feel it!’ with this huge grin on her face. I get goosebumps even remembering.”

Caplan’s Caravan Traveling Sound Studio is an attempt to replicate the magical moment of musical discovery people can have when interacting with sound-making equipment — without being sold anything or having an overly pedagogic teacher.

“There’s a beautiful communication that can happen when you break down that dichotomy (between audience and performer),” Caplan says. “What happens when you say, ‘This is not a mask or hat that I’m always wearing.’ It’s something we can kind of just pass along actually — like a talking stick.” 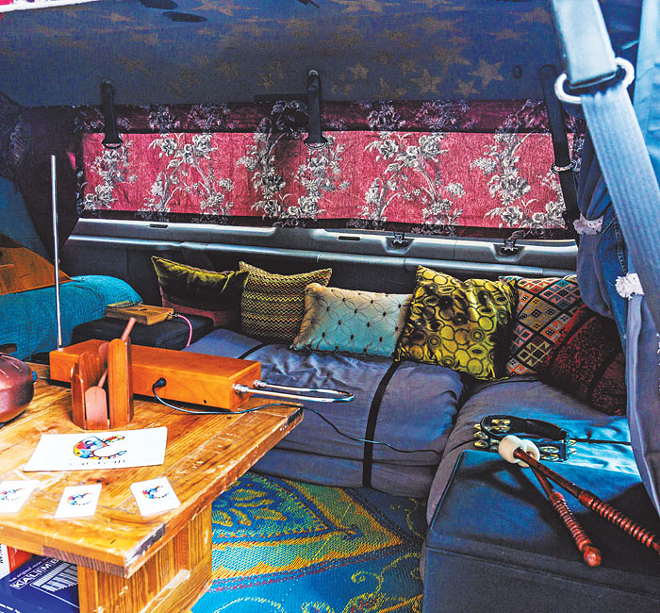 Caplan took the Ford passenger van out for a pop-up Caravan experience during a Wussy concert at Woodward Theater in Over-the-Rhine Sept. 23. It was the first time she unveiled it after the renovation.

While the recordings that happen in the Caravan are always open for anyone to sit in on, musicians in the bands playing at the Woodward that night popped out in between sets to play with the unique instruments onboard.

“It feels cool to be on the precipice of something that we all know is a real need and that people are working together to address it,” Caplan says.

Caplan has been interested in connecting potential musicians with the tools and support to cultivate their skills and interests for some time.

Last winter, she applied for one of People’s Liberty’s $100,000 Haile Fellowship awards to create an instrument-lending library. She attended information-gathering sessions and says she was “pesky” with People’s Liberty, trying to learn the ins and outs of grant-writing.

Although she was a finalist, Caplan didn’t win the grant. But she wasn’t downtrodden for long. She called her partner, musician Daisy Caplan, who is formerly of Foxy Shazam and currently half of the duo Lung, with the news.

“Then I thought about it for two minutes and then I was like, ‘You’re right. I don’t know how to do that. And I hope somebody does — I want it to happen. But I don’t want it to be me.’ ”

The idea was relatively simple: Take a van on the road to pre-existing events to record people as they experiment with making sound.

Currently, Caplan says she’s planning to do around one “gig” a month throughout fall and spring, with the Friday of Ladyfest weekend this coming Oct. 14 being the official launch. This is also when listeners can expect to be able to start hearing the posted recordings online. But the idea to drop into pre-planned public gatherings (music-, arts-, or otherwise-focused) was a recent decision.

In speaking with her People’s Liberty-recommended mentors and others who she says “know their way around planning events,” Caplan decided to go where people will be, “to plug-in when it seems to make the most sense.”

Caplan used the grant money to gut the van, reformat the inside into a recording studio, paint the outside and put together a showroom of more than a dozen instruments, which will be curated for each location by various musicians.

She believes the tools the van provides will help level the playing field for musicians of every level of experience, so everyone has equal opportunity for creative sound-making.

“There’s a gap — a barrier — to entry into our creative community,” Caplan says. “And it’s beyond just a privilege of wealth — it’s this full spectrum of resources. It’s time and opportunity to start playing something new.”

After her experience at Happen, Caplan had been pondering various ways that people, particularly youth, interact with music these days. Some of the kids she encountered at last year’s program didn’t even have music education programs in their schools.

Others take lessons at music stores, but that can be intimidating, too.

“It’s already assumed you know how to play music,” she says. “It’s a male-dominated culture and it’s still competitive.”

So in order to put visitors at ease, Caplan wants to make the sound studio approachable without being sterile.

“Keep it a little spontaneous,” she says, “a little freeform.”

After trying out “soft openings” at Northside’s Rock & Roll Carnival, the Woodward and most recently Art Off Pike in Covington, Caplan is preparing for the official launch during the first night of Ladyfest this year.

Experimentation will be part of the experience for those who participate. Caplan says it’s important to use the terms “soundscape” and “sound exploration” rather than prioritizing the creation of a song. In that way, she won’t be placing unnecessary pressure on her participants.

“I wanna break down the architecture of songs,” she says.  “Just make sound and that can be musical; it doesn’t always have to have a structure.”

As such, the mural on the van, painted by fellow musician and artist Jen Warren, depicts characters playing what Caplan refers to as “franken-instruments.” Project organizers will have informational cards out for visitors regarding the history of each instrument and perhaps even some “curation cards” regarding each musical selection of instruments.

Afterward, the recordings from each event will go up on the Caravan’s website, potentially edited or possibly as one full session, and Caplan anticipates the project having a long shelf-life.

“I see it going further than a year because a lot of what I needed to do was invest in the instruments and the basic collateral to make it happen,” she says.

Creating the Caravan Traveling Sound Studio was a lesson in experimentation for Caplan herself. After working her way through the grant-procurement process, she delved into the recording and interaction with the public even as the final touches were being put on the van.

“I was like, you know what?  Let’s just make the whole thing open to the public,” Caplan says. “Let’s just be transparent, let’s let it all hang out. You’re going to see the rough edges, but I do believe that there’s something to be gained in being able to see that process.

“If I’m talking about empowerment and inspiring others, it’s OK if you see a little bit in the process — be a part of the process.”

Rachelle Caplan’s Caravan Traveling Sound Studio was one of eight projects that each received $10,000 from People’s Liberty during the most recent round of its Project Grant program. Here are the others, with details supplied by People’s Liberty:

Wilson has already started bringing together leaders with local youth to create change through media in Avondale. Young adults will produce a Public Service Announcement about an issue.

This is a series of educational pop-ups, using interactive learning tools, to encourage residents to explore science through hands-on experiments.

The project promotes urban gardening through use of indoor vertical towers to grow produce to promote healthy eating in schools, local soup kitchens or food banks.

Already underway, this project aims to survey some 300 bars and restaurants in Over-the-Rhine and downtown to provide information on social media and websites about their accessibility to all people.

Sloan will be creating a functional drum set for multiple players, composed of unorthodox materials, to allow for interactive drum sessions. The park will be located on unused space in Price Hill.

Who “They” Is, Jasmine Humphries

Just underway, this endeavor aims to help students in Avondale learn how to plan and manage a project, identify stakeholders and get community buy-in as they become empowered to work toward change.

Malott has already started working to create spontaneous theme-based parades that encourage public participation. The aim is to get residents of different neighborhoods to create their own costumes and celebrate where they live.