Pulp — there it is again — the good cheap stuff is back and, not surprisingly, it has found its way onto the big screen. Jo Nesbø, the Norwegian bestseller trawling these murky shores, provides the basis for a solid anchoring with Headhunters. 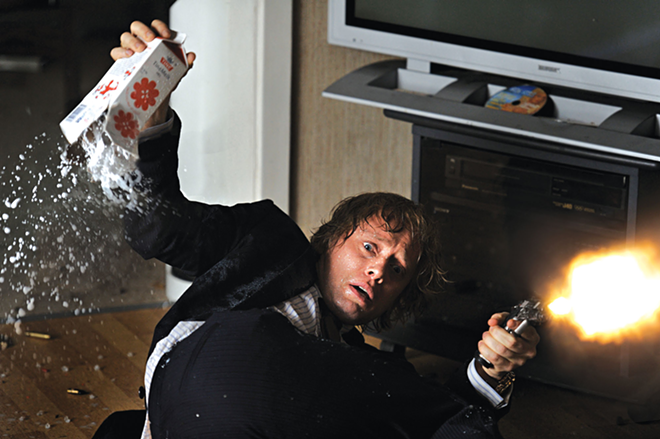 Pulp fiction, in its original form, had a sordid feel that started with the tactile experience, the cheap paper and the campy splashes of color mixed with the busty femmes and the hard-boiled heroes. Pulp was outrageous fun, worlds where men were men and women were paragons of beauty and not much else, unless they were the fatales. Violence and sex added value for discriminating readers, but literary aspirations need not apply — that would come later, years later for some of the best practitioners who were lauded once as low culture stepped up in the high-class strata.

And now, detective stories, what used to be classic noir, have achieved global critical mass with thrillers from the likes of Ian Rankin, Henning Mankell and Stieg Larsson (the recent flavor of the month) dominating the bestseller lists and American workmen like Dennis Lehane, and George Pelacanos sailing off into the more traditional literary waters as the dark docks overflow with high-quality pulp.

Pulp — there it is again — the good cheap stuff is back and, not surprisingly, it has found its way onto the big screen. Jo Nesbø, the Norwegian bestseller trawling these murky shores, provides the basis for a solid anchoring with Headhunters, the story of Roger Brown (Aksel Hennie), a top-notch corporate recruiter with a stunningly beautiful art-dealing wife named Diane (Synnøve Macody Lund) and a bit of a secret life that’s soon to float to the surface like a bloated corpse. Roger pilfers high-end art, leaving it difficult to detect copies in his wake, but his own insecurities start catching up with him; not the least of which is the fact that old Roger is a wee man (in stature) and his Amazonian wife is also desperate to have children.

OK, the notion of having kids doesn’t exactly fit into the pulpy mix, but it accentuates a strong character trait and makes Roger more human. The funny thing, though, is that Roger’s sense of humanity (and our ability to connect with this aspect of him) remains front and center, no matter how ludicrous things get, and let’s just say that Headhunters (adapted with fevered panache by Morten Tyldum) constantly spits in the face of logic, big huge gobs of snot. There’s talk of a Hollywood remake of Headhunters and I have to admit that during my first encounter with the film at last year’s Toronto International Film Festival, I couldn’t help imagining Tom Cruise as Roger, although maybe Cruise from a decade ago, the one leaving behind the peach fuzziness of The Firm and A Few Good Men, meandering into Vanilla Sky’s twists and turns. Headhunters mines that territory, but still firmly embraces the implausibility of Mission: Impossible (minus the needless CGI gloss).

Yet Hennie’s performance exposes a real vulnerability that Cruise fails to capture. Cruise is forever plucky and too driven; his characters simply can’t fail (he won’t allow them the option). But Hennie’s Roger is dogged by the sense that failure is always one bad move away. In fact, success is merely the exquisitely wrapped gift box; failure is what’s waiting inside. And once Roger rips open the box, he spends the rest of the movie trying to tape the shredded paper back together.

High-wire action, nudity and sex will certainly entice audiences, and again we will identify with Roger because Hennie is not exactly a classic movie star in terms of his appearance. He’s a bit of a striver, a hardscrabble type seeking to make good (forget Clooney and Pitt or even Matt Damon). Hennie is the guy we root for, the guy you want to see succeed despite the crazy odds. We believe the escapist fantasy (the too-beautiful wife, the daring secret life, the impossible to defeat antagonist who also happens to be the perfect choice to take over as CEO for one of Roger’s corporate clients) thanks to him.

Roger is what pulp heroism should have always been about, not the strong silent type who never failed to drop the right line just before plugging the villain and kissing the girl. Headhunters finally gets it right, which means, of course, that Hollywood will find ways to muck it up when they get their grubby little hands on it. We’ll end up with that more traditional and generic antihero, but I hope we won’t forget Hennie’s little guy because his Roger, complete with all his fear and self-loathing, is the real deal.