Ahead of Their Stop at Downtown's Aronoff Center, We Caught Up with the Crew of 'That Golden Girls Show! A Puppet Parody'

This show revisits the beloved pals (and roommates) from Miami... in puppet form. 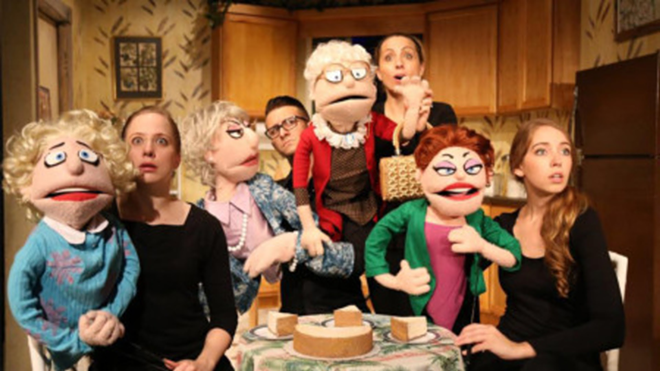 Throw a party. Invite everyone you know. That Golden Girls Show! A Puppet Parody is coming to the Aronoff Center Oct. 19-20 for an evening of cheesecake, Jazzercise, shoulder pads and elderly puppets talking about their sex lives — with all the witticisms that made the mid-1980s sitcom a classic.

Directed by Michael Hull and written by Doug Kmiotek, the 90-minute production will feature puppets reviving the roles of these four sassy roommates with Meggie Doyle as Rose, Erin Ulman as Blanche, Casey Andrews as Dorothy and Ashley Brooke as Sophia. Originally co-created by Jonathan Rockefeller and Thomas Duncan-Watt, tickets for the Cincy stop are limited and cost between $25-$45. (You can snag 'em at cincinnatiarts.org or call Aronoff Center's ticket office at 513-621-2787.)

Ahead of their show at the Aronoff, we caught up with the crew of That Golden Girls Show! via email.

CityBeat: What came first — an interest in puppetry or The Golden Girls?

Jonathan Rockefeller: I’ve been a fan of The Golden Girls for a very long time, but working with puppets did come first, when I was much younger, from a few childhood television shows I watched. It is impossible to do a revival or reboot of the original classic television show, so this show was a perfect vehicle — and the closest you’ll ever be to see these characters onstage, albeit in glorious puppet form.

CB: Can you touch on the design process of the puppets? They look very Sesame Street!

Rockefeller: These puppets started as caricature sketches by one of our designers who over-emphasized the physical attributes of each character. From that point, they were patterned and built by our very talented team of builders.

CB: Why do audiences still resonate with these characters decades after its finale?

Meggie Doyle: The Golden Girls writers were just incredible, creating four unique characters with big personalities, and the four actresses all did a brilliant job balancing the over-the-top comedy while keeping their characters very human and “real." Ask any Golden Girls fan, “Are you a Blanche, a Sophia, a Rose or a Dorothy?” and they will tell you which they are without a moment’s hesitation! Also, while the show was extremely progressive for a primetime sitcom in the 1980s in terms of certain topics and issues they covered...the heart of the show was always rooted in the ups and downs that come along with friendships, family, and love. And what’s more universal than that?

Ashley Brooke: These characters are so real, so vibrantly fleshed out; they are women we all know in our own lives. That’s why I believe their storylines still resonate today. They were so ahead of their time, so completely bold and sassy. They never shied away from any issue and they always dealt with everything head-on. At the end of the day, it’s a show about friendship and lifting each other up.

CB: What challenges arise when embodying a puppet versus, say, a regular human part?

Doyle: With any puppet, it’s the job of the puppeteer to keep the puppet “alive” — giving life to the puppet’s eyes, body and arms at all times, whether your puppet is speaking or listening. What’s interesting with this particular show is that we’re not just giving life to a character, as an actor does, plus life to a puppet, as a puppeteer does, but we’re also challenged with evoking these iconic characters who are so well-known by their fans, and who were played by four of the greatest comedic actresses of all time for seven seasons...with reruns still continuing to air on TV over 25 years later! So there’s an extra challenge with this particular show, where we’re also trying to imbue the puppet with the physicality and nuances of the original girls that the fans know and love so well.

Brooke: The greatest challenge, and in turn, the greatest joy, of embodying a puppet is finding ways of translating my own personal physicality into her. I know the mechanics of my own body and how I physically react and express myself to certain situations — it’s a huge part of being an actress. But finding ways to manipulate my puppet to match my every move is truly something spectacular. Making Sophia run around or express joy or sadness through new and interesting ways of manipulation is truly a magical feeling when it all comes together.

CB: Lastly, do you have any favorite Golden Girls moments of your own?

Rockefeller: There are so many moments to choose between! I guess my favorite scene takes place on Dorothy’s birthday when Rose organizes a surprise party at Mr. Ha-Ha’s (which happens to be for children). It’s from a surprisingly touching episode called "A Piece of Cake." The genius of the television show was being able to blend comedy and snark with genuine love that the characters share for each other.

Doyle: My favorite Golden Girls moment is when Dorothy is searching for a box that Sophia has hidden from her and Rose suddenly walks into the living room holding the box. Dorothy asks how Rose how she found it, and Rose replies, “I don’t know, I was just under my bed, playing, and there it was!” The line isn’t even necessarily a punchline (though there are ZILLIONS of those throughout the series), but I giggle every time I think of it, because what 60-something-year-old woman spends time playing under her bed? Rose Nylund, of course!  And that’s what we love about her!