With a horror story at least partly inspired by Trump's election, the new season of 'AHS' features Evan Peters as a "deplorable." 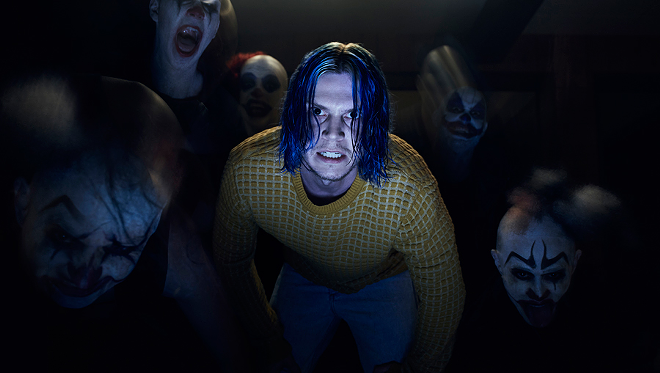 Photo: Frank Ockenfels/FX
Evan Peters as Trump supporter Kai Anderson
American Horror Story is a tricky series. Every year I get sucked into the creepy, campy anthology, trying to follow clues laid out to tease the next season, guessing at the possible theme. I look forward to seeing which stars are returning (like the talented Evan Peters and Sarah Paulson) and which new actors sign on (Alison Pill and Billy Eichner join this season). Despite being disappointed by the past few seasons, I always root for the series and give it a chance no matter how many times it lets me down. Maybe — just maybe — Ryan Murphy and friends can catch lightning in a bottle again, recapturing the scary magic of Murder House (Asylum was also fantastic).

Alas, no such luck. The seventh installment of the anthology, American Horror Story: Cult (10 p.m. Tuesdays, FX, through Nov. 14), is another disjointed terror tale that packs a punch but leaves a sour taste. Taking place in the political aftermath of the 2016 election, Cult employs concepts like phobias, liberal stereotypes and the hive mentality to spin this season’s horror story.

Paulson and Pill star as Ally and Ivy, a couple living a picturesque life as moms to son Oz and restaurant owners in Michigan, when the election of Donald Trump threatens everything they hold dear. Meanwhile, not too far away in the same city, Peters’ Kai Anderson celebrates the unexpected win, activated by a figure like Trump. As Ally begins to fall apart, consumed by a laundry list of phobias and real, tangible terror, Kai rises as an underground ringleader, assembling a local crew of not just Trump supporters, but any misfit left unsatisfied by their  situation.

The result is not unlike Trump himself — garish and over-the-top, but ultimately empty. As each character turns against one another, we’re left without any sympathetic characters. The nonlinear storyline is used as a crutch, not effectively — viewers are confused in order to continue tuning in to figure it out why any human would be compelled to act the way these characters do.

The only redeeming aspect of the show is Peters’ performance (and the interior set decorating is pretty fab, too). When Trump wins, like so many “deplorables,” Kai is ignited to capitalize on the fear. He, too, represents a new brand of so-called conservatism, and runs for city council to make real change at the local level. Kai is charismatic and has the uncanny ability to relate to others, which he uses to manipulate them into carrying out his own agenda — which seems to be inciting chaos to gain control. Seeing as how he indoctrinates followers from all backgrounds, it’s unclear if the hate he spews is even genuine. If only Peters would break free from the cult that is this series and offer his talents elsewhere.

Cult manages to touch on some of the real fears and issues of today, like gun violence, immigration and deportation, attacks on minorities, male fragility, white feminism, misinformation by way of compromised, biased journalism and, straight out of 2016, evil clown sightings — but it’s all style and no substance. It addresses real horrors but neglects to offer any real commentary.

American Horror Story always teeters on the verge of self-awareness, and here we get a heavy helping of humor in a “This is the future liberals want” kind of way. One character has a “no cisnormative pet names rule” that her son defies by naming his male guinea pig “Mr. Guinea”; another screams “Get woke” while beating a pussy-grabbing Trump supporter. I can appreciate jabs at the stereotype of triggered, safe-space needing liberals, but is it all just a joke? Murphy is anything but subtle, but I yearn for him to go deeper than the shock-and-awe imagery.

Cult tries to hit close to home but ultimately misses the mark. In a recent episode, the opening scene depicting a mass shooting was edited in light of the recent violence in Las Vegas, with the more gruesome elements removed. Clearly, many are living in a true American horror story — why not give viewers an escape or offer real cultural critique instead of simply holding up a funhouse mirror?