An Artistic Rebirth in Covington 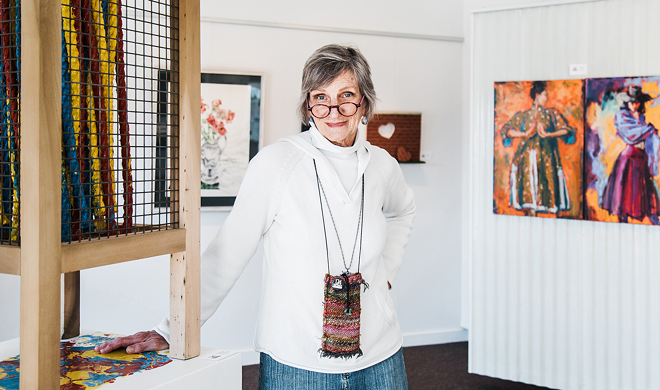 PHOTO: Hailey Bollinger
Terrill has returned to Cincy to curate a gallery

As an ambitious woman with a modern sensibility, Suzanna Terrill prefers to focus on the present. However, parallels to the past are hard to ignore as she encourages a new generation to buy local art.

In 1998, Terrill opened an eponymous gallery at 1315 Main St. in Over-the-Rhine, when that neighborhood was still waiting to be reborn. She had wanted to be part of a renaissance, but the 2001 riots dashed those dreams. A photo of her behind a smashed window appeared in newspapers nationwide. Fearful of more unrest, customers stopped coming to Suzanna Terrill Gallery. By 2003, she decided to step away from gallery life and moved to Tennessee.

That was then. This is now. Terrill is back in Greater Cincinnati — this time in Covington — and she’s once again running an art space in a neighborhood that’s poised for a revival. She had returned to the area last year only because her sister was ill, yet an unexpected invitation from entrepreneur/collector Ramesh Malhotra to curate his new 124 West Pike St. Gallery was meant to be, Terrill believes.

The grand opening was in August, and while Terrill continues to look for ways to build traffic, the response so far has been very receptive, she says. “The nicest compliment I’ve got is people come in and say, ‘You know, there’s not one thing in this gallery that I don’t like.’ ”

Terrill prefers art with an edge. The gallery currently houses abstracts cast from rubber, airbrushed scenes of outer space and birds’ eggs painted upon a gauzy textile that hangs from the ceiling. “Primary Colors” is a mixed-media sculpture that includes splatters of dried paint atop the work’s pedestal. Its artist, Robert Fry, is one of several — including Anthony Becker, Cedric Michael Cox, Celene Hawkins, Jeff Sutherland and Liz Zorn — who Terrill also represented two decades ago in OTR.

Being an urban trailblazer in the late 1990s was great, Terrill says. And she is feeling like a pioneer again on Pike Street. At our interview, she even looks the part in a long denim skirt and jacket, plus lilac boots. Though she’s 77, she appears much younger.

As she did in OTR, Terrill lives above her gallery with her pets. Her new neighbors and partners include the just-opened Duveneck Square apartments at 31 W. Pike St. A few more doors away at 2 W. Pike, the nonprofit Renaissance Covington is trying to create more buzz about the emerging arts district between MainStrasse and Madison Avenue. Zorn’s paintings hang inside the Hotel Covington on Madison, and the new apartments feature photographs by Marc Wavra, another gallery artist.

“The whole idea is to bring the neighborhood together so the shops can make a living — like what we tried to do on Main,” Terrill says.

This wedge of the city’s business district was named after renowned artist Frank Duveneck, a Covington native who lived from 1848-1919.  Though a statue of the “Whistling Boy” painter has stood for more than a decade in a small park bounded by Pike, Washington and Seventh streets, Terrill quickly realized that few of her neighbors realized how influential he was. So, she has turned him into the gallery’s muse for March and beyond.

All month, the gallery is holding A Celebration of Frank Duveneck featuring artists influenced by the painter’s bold strokes, dark portraits, realistic style or hometown. Author James Ott of Crescent Springs will sign copies of his book,  The Greatest Brush: Love, Tragedy and Redemption of Artist Frank Duveneck.

“The thing I love about (Duveneck) is that he just never really stopped teaching or instructing or getting involved,” Terrill says. After finding fame and living a bohemian life in Europe, then losing his wife to pneumonia after just two years of marriage, Duveneck returned home and became a beloved faculty member at the Art Academy of Cincinnati.

“A lot of painters like to be off doing their own thing and don’t like to share,” Terrill says. “And he was not that at all.”

Terrill, a painter with a background in arts education, has opened the gallery’s small studio to other artists and conducts informal critiques. She is coaching and showing the work of Andrew Davenport, a client of The Point Arc center for people with disabilities. Soon, she also will welcome a framer to her space. “It’s going to open the doors even more,” Terrill says.

She realizes that art galleries appear intimidating to some people, and that prices over $150 can turn younger people away. But for a few dollars, someone stopping in at 124 West Pike can still walk out with a lino-print greeting card.

“The old crowd, and I’m in that old group, that used to go out and buy art all the time — that’s changing,” Terrill says. Yet it can take years to attract a new crowd of collectors to a gallery.

“You have to make it a destination,” she says. “That’s why we titled it 124 West Pike St. Gallery. You have the street address, so you know it’s here.”

And once you are here, you might find surprises in store. A younger visitor bought one of Barbara Mayerson’s big, square abstract paintings because its geometric pattern reminded her of a board game that her grandfather had made. Passersby have stopped to inquire about a Mick Jagger portrait painted by Guy McIntosh. Terrill put it in a display window just to see what kind of response it would get.

“I’ve had three or four people ring the bell and say, ‘Is that Mick Jagger? Is that a photograph? Is that a painting?’ And they just have a fit over it. That’s the way you do it,” Terrill says.