An Excerpt From New Book "I Got a Monster: The Rise and Fall of America's Most Corrupt Police Squad"

"I Got A Monster" details the way a corrupt crew of cops working in a unit called the Gun Trace Task Force ran a criminal enterprise, robbing drug dealers, stealing and dealing drugs in the aftermath of the 2015 Baltimore Uprising. 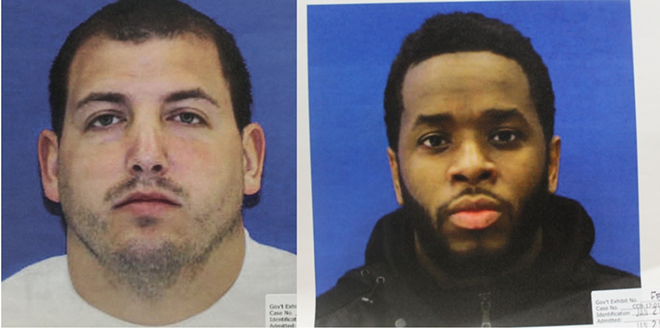 In 2015, Baltimore had an uprising against police violence much like those occurring around the country this summer. When it happened, we were both working at the Baltimore City Paper, an alternative weekly much like this paper — except that it no longer exists.

The Baltimore Uprising was the sort of event that alt-weeklies exist to cover: a massive community-organized protest in response to the death of one of its residents standing up and saying, "no more." Our coverage focused on the people in the streets — organizers, gang members who were trying to make a truce, for example — and we put the reporting together into dispatches that all assumed the voice of the paper which was the voice, we hoped, of the city.

The experiences we had trying to chronicle that rebellion and the police blowback that followed it was ultimately translated into our new book, I Got a Monster: The Rise and Fall of America's Most Corrupt Police Squad, which came out July 21. I Got A Monster details the way a corrupt crew of cops working in a unit called the Gun Trace Task Force (GTTF) ran a criminal enterprise, robbing drug dealers, stealing and dealing drugs in the aftermath of the uprising. Co-writing the book could only have happened because of the alt-weekly — newspapers where advocacy journalism, narrative storytelling and actually good writing are encouraged rather than discouraged.

As we write this, many cities continue to organize against police violence, and after sending in federal law enforcement to snatch people up in Portland, Donald Trump threatens to send federal agents into other cities and do the same. And while their federal authority and intervention is novel, their activities are not. They are an extension of policing as it is intended to function in all of our cities, as this excerpt from I Got A Monster shows.

DETECTIVE MOMODU GONDO DIDN'T show up for the new GTTF's first raid. Detectives Jemell Rayam, Daniel Hersl, and John Clewell got the guy dirty in his car, and Hersl and Rayam waited on the porch while Clewell went for a warrant to search his house.

"Hey, if there's any money, you know, we'll split it," Rayam said. Hersl agreed. It was no big deal for either of them.

"Hey, did you get any money?" Hersl asked Rayam after the search.

"I figured, you know, it should be money in there," Rayam said. "But I didn't find any."

There was always the possibility that one of the new guys had found the cash first and not cut them in. Even if they didn't get any money, Jenkins's new unit gained glory in the form of news coverage: "Guns and Drugs Seized in Southwest Baltimore Raid," the local TV declared the next morning with a photo of all the dope and guns laid out on a table.

A few days later, Jenkins, Gondo, Rayam, Hendrix, and Ward entered Milton Miller's row house in East Baltimore and forced him to show them where he kept his money. In Miller's bedroom, they found a shoe box with $10,000 stuffed in it. They sent him downstairs and stole $2,000. They also found $15,000 in a boot along with fifty grams of heroin. They took the money and left the heroin.

A few days later, Jenkins called Gondo, who was with Rayam at an auto shop in South Baltimore. The two were trying to get some additional police lights put on an unmarked car. Jenkins told Gondo about "some fuckin' ballers" he was up on and suggested getting together to do "some street ripping" later on.

"We over here right across from the Ravens' stadium now trying to get these lights in," Gondo said.

"Oh, you found somebody to do it?" Jenkins asked.

"How much they want?" Jenkins asked.

"They talkin' like four or five hundred," Gondo said.

"Man, tell them bitches three hundred cash, it's for the police, Jenkins said. "And they get a get-out-of-jail-free card with my boss's phone number."

"Right. This is a legitimate business, though," Gondo said. "They saying, I think they can't even do it, though, they talking to Rayam now, they saying they can't do it."

"Lazy motherfuckers," Jenkins said. "Tell them we about to drop a case on 'em."

That night, the GTTF got together for a series of door pops. A little after midnight, two cars rolled down Baltimore's historic Pennsylvania Avenue not far from where Freddie Gray was grabbed, looking for groups to roll up on and grab anybody who ran.

"A couple of nights a week, we would just go out to hot areas, we would drive around," Hersl said. "We drive around them areas — kind of go hunting, see what we can get into."

A group of Black men were hanging out near a corner store, some against the wall and one sitting on a bus stop bench emblazoned with Baltimore: The Greatest City in America. Jenkins whipped a manic turn and pulled up to the curb. Clewell popped the door, scattering the group, moving targets running in all directions.

Someone in a white T-shirt rushed around the corner, and Clewell went after him, but he was too fast and Clewell lost him. From the back seat of the car, Hersl saw another man dart the other way, holding his waistband like he was trying to stop a gun from slipping through his pants. So Clewell went after the man and Hersl hopped out and ran with Clewell.

When the suspect leaped off a retaining wall, a gun fell out on the ground and Clewell grabbed it.

The door pop was a new strategy for the GTTF — and it was unconstitutional. But numbers were numbers. They got three more guns that night with door pops.

Read an interview with Baynard Woods and Brandon Soderberg at citybeat.com.