Another Round of Cincinnati Theaters — Come and Gone

Drawing on my efforts to cover theater in Cincinnati for a quarter-century (including writing for CityBeat since 1994), two weeks ago I wrote about theaters that came and went during the 1990s. This week, I’m looking at companies that started duri 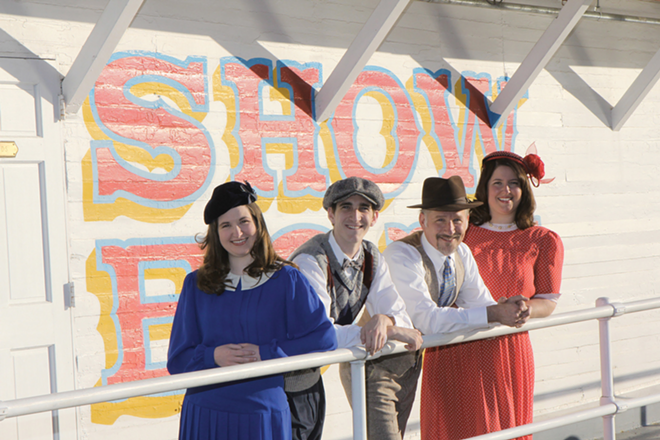 Drawing on my efforts to cover theater in Cincinnati for a quarter-century (including writing for CityBeat since 1994), two weeks ago I wrote about theaters that came and went during the 1990s. This week, I’m looking at companies that started during the 2000s.

Cincinnati Landmark Productions (CLP) is today one of Cincinnati’s most successful theater “empires.” It actually started in 1990 when it took over exclusive production rights and nautical care of the Showboat Majestic (which first brought audiences on board in 1923). Running summer seasons there (and keeping the boat afloat) have been major tasks for founder Tim Perrino and his crew. But that wasn’t enough: CLP bought the Covedale in 2002, a defunct West Price Hill movie theater, and renamed it the Covedale Center for the Performing Arts. The venue attracted more than 35,000 ticket buyers in 2012 for theater performances. The building has undergone a ton of physical improvements since 2002. Recent changes include a marquee with programmable LED panels and energy-efficient lobby doors. Earlier renovations expanded backstage space and other amenities. CLP has presented Cincinnati Young People’s Theatre productions for more than three decades. (This summer it’s Grease at the Covedale in late July.) The group is part of the new Incline Theater, a $5 million project in East Price Hill.

One of the brightest stars of the 2000s was Alan Patrick Kenny and his New Stage Collective, which began producing summertime shows in 2003. Kenny cofounded the group with a high school friend, Joshua Steele (now managing Covington’s Carnegie theater operations). Across seven seasons, Kenny directed at least two dozen productions, including 20 regional premieres. In 2007, NSC moved to 1140 Main St. in Over-the-Rhine, where admirable productions including Edward Albee’s The Goat, the musical Caroline, or Change and Jerry Springer: The Opera were presented. The economy killed NSC in 2009. Kenny subsequently earned a master’s in theater at UCLA; now he’s teaching and directing at the University of Wisconsin — Stevens Point.

Lyle Benjamin launched Queen City Off-Broadway in 2001. It’s been largely a one-man enterprise, presenting shows in more venues than any other company: downtown’s long-gone Upstairs at Carol’s and the Aronoff Center; Gabriel’s Corner and the old and new SCPA buildings in Over-the-Rhine; the Mockbee Building in Brighton; Cincinnati Artist Warehouse in Northside; the Madisonville Arts Center; and the Heritage Village Museum in Sharonville. Originally promoted as a company championing African-American playwrights and content, QCOB staged shows by August Wilson, but its focus has broadened, with more than two dozen shows to Benjamin’s credit; he directs, produces and usually self-funds. He plans to present the local premiere of David Mamet’s 2009 script Race this year.

The Women’s Theatre Initiative (2001-2005) began within the Minerva Project, a program of another short-lived company, The Janus Project. Led by Kristin Dietsche, WTI held readings that culminated in mid-summer productions (2001–2005), including Naomi Wallace’s 1995 script, One Flea Spare, in 2001. Also in the early 2000s we saw productions at the University Y by the IF Theatre Collective (2001-2004), founded by Benjamin Mosse and sustained for several years by local director Ed Cohen.

At Middletown’s Masonic Temple, Actor’s Repertory Theatre presented works for one cataclysmic season (2000-2001) then closed, returning as the Rising Phoenix Theatre Company (2001-2006), led by Christine Brunner. Performance Gallery, a Cincinnati Fringe mainstay since 2004, began in 2002, offering eclectic works, including Italo Calvino’s A King Listens in 2004 at the Contemporary Arts Center. Clear Stage Cincinnati began in 2003, with performances at the Aronoff. Most memorably, over three seasons the company presented local writer and actor Blake Bowden’s three-part adaptation of Tolkien’s Lord of the Rings, staged by Gina Cerimele-Mechley.

Out-of-town artists invented Jersey Productions (2006-2009) for Covington’s Carnegie Center then moved it to the Aronoff. Never successfully marketed, the group’s productions were uneven. Today Jersey produces summer camps for kids (culminating last weekend in performances of Schoolhouse Rock Live! Jr.), but there have been no full-scale productions in four years. Transit Five, a summer theater company featuring college performers, had four seasons (2006-2009), and the Satori Group, mostly College-Conservatory of Music Drama grads, staged shows (2007-2009) around town before moving to Seattle, where the company has received good notices.

If you have thoughts, insights or corrections regarding my recollections (or omissions) of theater for the past two decades, drop me an email. In my July 17 column I’ll fill in missing information, provide news about some new groups and share thoughts about what might enhance our theater scene.