We toured Architect of Air's "Dodecalis" ahead of its public world premiere; here's the scoop

Photo: Mackenzie Manley
One of the spaces in Architect of Air's "Dodecalis"

BLINK — a four-night light and art experience spanning 30 city blocks through Over-the-Rhine, downtown and, new this year, across an illuminated Roebling Bridge into Covington ­— returns to Cincinnati by popular demand this weekend after the event’s inaugural event in 2017. Now in its second run, BLINK kicks off Oct. 10 and, through Oct. 13, will transform the cityscape by way of large-scale new murals, light installations, interactive sculptures, performance art, live entertainment and projection mapping.

In 2017, Washington Park played host to Architects of Air's “Katena,” an inflated, palace-like “luminarium” that glowed in vivid color. As BLINK’s only ticketed event (it cost $5), it also proved to be one of the most popular.

Architects of Air return to BLINK, this time for the world premiere of their new luminarium “Dodecalis.” Like its predecessor, Architects of Air writes on its website that “Dodecalis” will be inspired by “natural forms, geometric solids (and) Islamic and Gothic architecture.”

“Dodecalis” allows for 80 people to enter at a time, and the staff overseeing the structure recommends spending about 20 minutes inside. This weekend, thousands will remove their shoes, enter through the air-lock chamber and step foot into another world.

Ahead of its debut, we toured the whimsical structure and here's what we thought. For more photos, check out our slideshow.

Mackenzie’s take: Entering “Dodecalis” is what I imagine walking into a friendly alien spaceship is like. Soothing, deep hues of red, purple, blue and green drench their respective spaces. Divided into cavernous rooms — each linked by winding hallways — with every turn comes a new revelation of sight, all joined by a droning, meditative ambient soundscape.

Look up. In one space, an illuminated flower blooms on the ceiling. In another, geometric lines extend into floral shapes. Recesses of light invite pause; take a seat and be awe-inspired. “Dodecalis” could perhaps best be described as an otherworldly labyrinth, but one you’re willing to lose yourself in.

Pro tip: Before you even enter, you’ll be asked to take off your shoes, so plan accordingly.

Morgan’s take: The sound of it strikes first. Before even stepping foot inside, a rush of ambient song washes over you. It’s hard to pin down the sound — maybe it’s a long echo, or the low call of a whale through water. The crescendo of a violin waxes and wanes and a transcendent chorus of voices resonate through the structure’s rounded hallways and vaulted ceilings. As you step deeper into the rainbow prism of its chambers, the contemplative hum surrounds you, fabricating seemingly out of thin air.

Inside, “Dodecalis” is a maze where everything is connected. It’s easy to get lost. (Or lose yourself.) The temple-like chasms are an otherworldly vision of beauty, and at every turn is a new, mesmerizing wonder of light and color. Some rooms are cloaked in orange vibrant red, while indigo blue and deep violet glow through others. Geometric shapes of blue, red and green line the ceilings. When you blink, you can still see their patterns radiating through the dark of your eyelids.

“Dodecalis” is a dream you won’t want to wake up from. 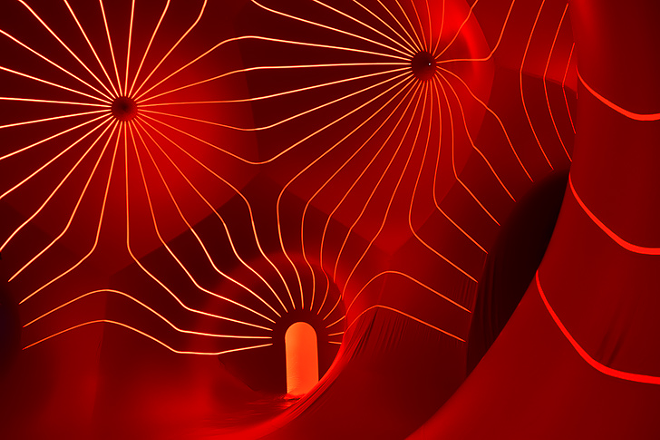