Celebrating its 150th year, the Art Academy of Cincinnati has named Joseph Girandola as their new president 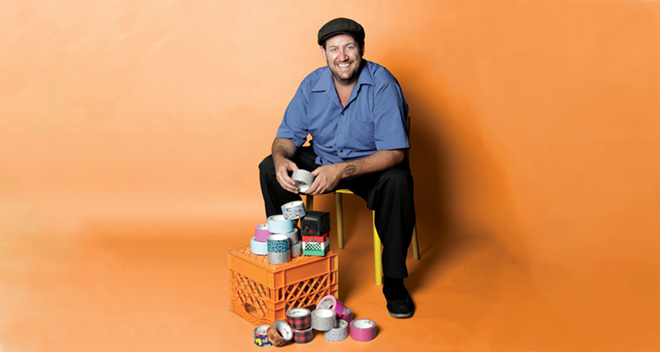 The Art Academy of Cincinnati has announced that their board of trustees has named Joseph Girandola as the college's next president, a role he will assume Aug. 1. He will succeed Mark Grote, who served as interim president following former president John Sullivan's retirement last June.

A few quick facts about Girandola: Originally from Baltimore, he was classically trained as a stone carver in Florence, Italy, but has since worked primarily on three-dimensional drawings and paintings using an array of unique mediums — from duct tape to milk crates; most recently, he served as the interim associate dean of graduate studies and research at the University of Cincinnati's College of Design, Architecture, Art and Planning.

Despite working in administrative roles, Girandola is still firmly planted in his artistic practice, as explained in a Q&A on the AAC's website.

"When my kids go to sleep, I go down and work in the studio," he says in the interview. "And whether that’s not making anything in the studio and just looking at what I’ve done the day before or the week before, I still consider that an idea-generation act of being in the studio. And for me, maintaining a studio practice I’ll never give up, it’s who I am as a person — it’s who I want to be as a mentor as well — is to let people know their practice is always alive.”

He also remarks in the interview that, while working with graduate students at DAAP, he has been "repeatedly impressed" by the students coming out of AAC.

“I see in them a fearlessness to be bold, to be empowered to express themselves," he says in the interview. "And that is a world I want to live in.”

Having worked at DAAP as a tenured faculty member in various roles for seven years, he also previously taught in Pomona College's art department in California, was the assistant director for the Santa Fe Art Institute and was the director of the Masters of Fine Arts Program at University of the Arts in Philadelphia.

One of his initiatives at DAAP included securing external funding opportunities for creative research; he was also part of the steering committee for UC's 1819 Innovation Hub, a space for students and faculty alike to network, collab and create.

Those experiences may benefit Girandola as the AAC — in the midst of its 150th anniversary — embarks on its recently announced plans to increase enrollment and "transform" its campus.

“My vision for the Art Academy’s next chapter is to become an open door for problem-solving in the city through the creative practice,” Girandola says in the release. “Building upon its amazing history, the Art Academy will look to collaborate with all of the game-changing innovative entities in the region to provide its students with the best possible skills needed to survive in the global creative economy.”