At her CAC-sponsored shows this week, Kate McIntosh literally puts art in the audiences' hands 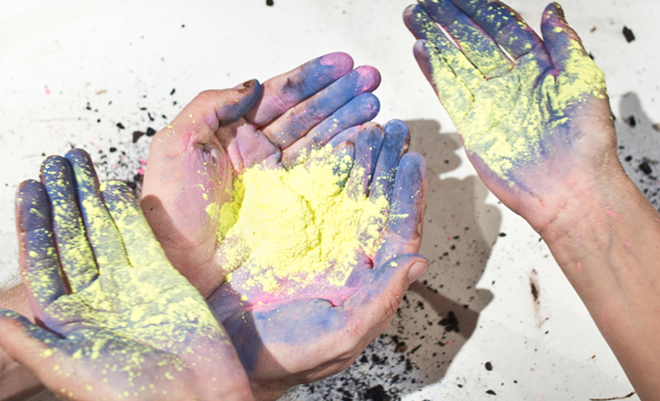 PHOTO: Dirk Rose
McIntosh wants her audience to use their hands.

From her home base in Brussels, Belgium, transdisciplinary artist Kate McIntosh speaks carefully and thoughtfully in a Skype interview about her attraction to hands.

“As objects, I find hands to be extraordinarily beautiful and fascinating,” she says.

McIntosh will be performing the U.S. premiere of her interactive art/theater piece, In Many Hands, at the Aronoff Center’s Fifth Third Bank Theater Thursday through Saturday. It is part of the Contemporary Arts Center’s performance season and involves audience members using their hands in creative ways.

“There’s something about responsibility and capability that comes with the image of a hand,” McIntosh says. “If it’s in your hands, then you are in a position of agency and, possibly, responsibility.”

That word — “responsibility” — is a term the artist uses several times throughout the conversation when speaking of her concern for the audience’s reception to In Many Hands.

“I’m very uninterested in directing an audience,” she says. “I like to offer the score and structure, and then leave a lot of space for people to be autonomous (and) to make their own decisions. This is really important to me.”

“And it’s important that people — the audience — also take responsibility to make the thing flow well,” she adds.

McIntosh, originally from New Zealand, moved to Belgium in 2000 because there was “a lot of porosity between art forms,” she says. “In my experience, there were other scenes where people wanted to police those boundaries between disciplines much more and” — she pauses to find the right words — “I don’t really find that interesting.”

Working with people who had different skill sets than her own allowed the artist to blossom into other areas beyond her formal dance training.

“Every project since then, basically my modus operandi is that I try to do something I don’t know how to do,” she says.

Collaborating with two other artists for In Many Hands, McIntosh knew she wanted to invite strangers to a communal meeting in order to engage in “a kind of communication that didn’t involve talking.”

Addressing the need to make her audience comfortable throughout the one-hour-and-20-minute performance, McIntosh speaks of the work like a dancer would a piece of music: “The score is clear and transparent to everybody in the room, and we follow it to the end,” she says.

“But what happens, of course, is that people are then invited to inhabit it. So all the detail, the texture and the way they respond… that is very subtle.”

In a disruption of the classic difference in vantage point between audience member and performer, participants of In Many Hands are seated next to strangers along one side of three long tables set up in a triangle. They are encouraged to touch, listen to, sniff and otherwise investigate objects that the artist chose because of their relationship to the body.

To establish a communal feeling, audiences remove all of their jewelry, put away their phones and bags, and wash their hands together as a group — a ritual that marks the formality of the event right at the outset.

McIntosh says this is a quiet, sensory-based project, so she guides them through thresholds of increasing participation, in order to gain their trust. “Through those, the audience can start to understand that (the performance) is something calm and is going to unfold slowly,” she says.

“I think the whole setting encourages people to become very alert to subtle behaviors of the people around them, to what those communicate and to how they can respond,” she says.

“The whole idea is just to build up trust, and that seems to work pretty well. After that, people start to loosen up and go, ‘OK, I don’t feel that I need to defend myself in this situation, so I can just get curious, ride along and see what happens.’ ”

In Many Hands will be performed 8 p.m. Thursday-Saturday, with an additional 2 p.m. matinee on Saturday, at the Fifth Third Bank Theater, Aronoff Center for the Arts (650 Walnut St., Downtown). Tickets/more info: cincinnatiarts.org