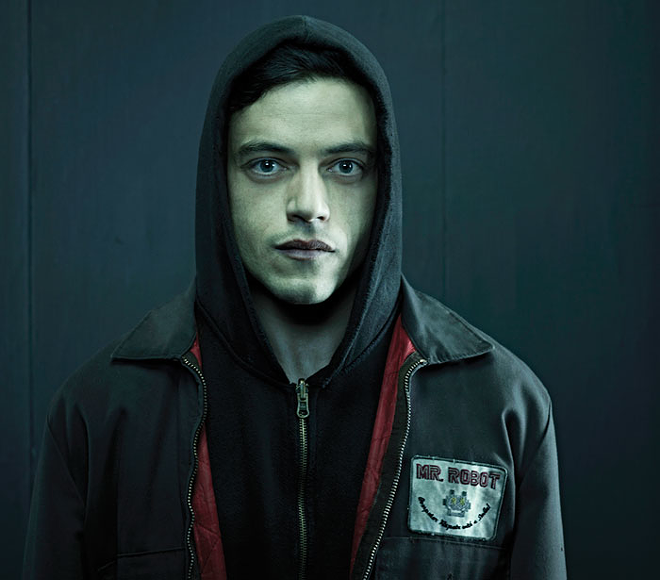 But how naïve I was last summer to make that initial judgment when Mr. Robot (Season 2 Premiere, 10 p.m. Wednesday, USA) first debuted. Who would have expected the channel known best for its marathons of Law & Order: SVU to produce such an intriguing original show? Never judge a book by its cover — or a show by its network — because this psychological thriller turned out to be an addictive hit that garnered lots of critical love, including a 2015 Golden Globe for Best Television Series - Drama and one for Best Supporting Actor - Series, Miniseries or Television Film (Christian Slater).

Mr. Robot follows Elliot (Rami Malek), a programmer at a cyber-security firm who hacks as a hobby and struggles with depression, social anxiety and drug addiction. Like most anti-heroes, Elliot has a code — rules that he makes (and breaks) as he takes viewers down a rabbit hole of delusion, crime, paranoia and vigilantism.

The show toys with reality, winking at viewers with playful references and thoughtfully dealing with complex topics like mental illness and “hacktivism” while neither dumbing them down or shooting over the audience’s heads. The result is a twisting, turning mystery that leaves you asking, “Where is my mind?”

2016 ESPYs (8 p.m., ABC) – So maybe most of us didn’t know the ESPYs existed until last year, amid the Caitlyn Jenner buzz. Well, they do and they’re back, this time with host John Cena celebrating the year’s biggest sports moments. Highlights include Craig Sager receiving the Jimmy V Perseverance Award and a tribute to The Greatest of All Time, Muhammad Ali, with Kareem Abdul-Jabbar.

The A Word (Series Premiere, 10 p.m., Sundance) – Based on the Israeli series Yellow Peppers, this six-part British drama explores a young boy’s autism diagnosis and the effects it has on his multigenerational family.

Black and White (Series Premiere, 10:30 p.m., A&E) – If you were a fan of VH1’s nostalgic I Love the… series or Best Week Ever, you might be familiar with comedians Sherrod Small and Christian Finnegan. Here, they’ll offer their perspectives on more current events and issues.

Preacher (9 p.m., AMC) – Jesse faces off against Quincannon and the Meat Men, protecting the church in a good old-fashioned shootout. Tulip tries to help a friend.

Ballers (Season 2 Premiere, 10 p.m. July 17, HBO) – Entourage: Sports Edition returns! Season 2 opens with Spencer confronting an old rival on air, Ricky gets bad news on his birthday and Charles lives it up as a fan fave.

Vice Principals (Series Premiere, 10:30 p.m., HBO) – From the creators of Eastbound & Down comes this comedy about competing veeps — vice principals, that is — eager to be named commander-in-chief of a local high school. When the principal (Bill Murray) announces his retirement, the gloves are off for stars Danny McBride and Justified’s Walton Goggins.

West Texas Investors Club (10 p.m., CNBC) – Think of it like a redneck Shark Tank: Entrepreneurs pitch their businesses in the hopes of securing an investment from Butch Gilliam and Rooster McConaughey. This week features Cincy startup Kapture, a wearable audio recording device.

Black Market With Michael K. Williams (10 p.m., VICELAND) – The struggle to keep weapons from being trafficked from states with lax laws to those with strict gun control.