Based on Bryan Stevenson's Book, Film 'Just Mercy' Will Make You Wanna Holler

Without a doubt, "Just Mercy" is a film full of conviction 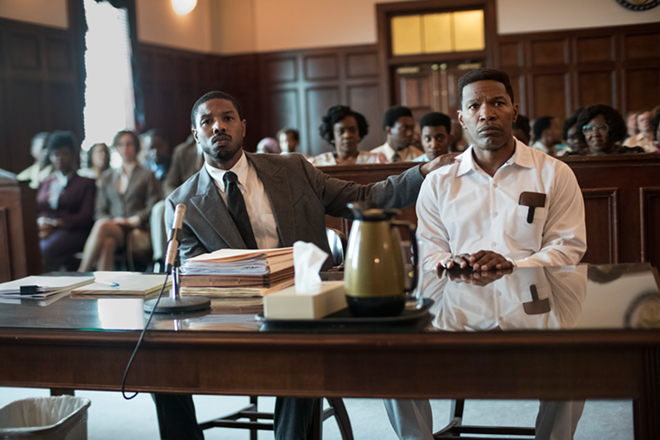 The book Just Mercy by attorney Bryan Stevenson is the story of a movement, a quiet revolution started by one man with help from some like-minded allies. It plays small, like a buried history (like a lot of American history). In its focus on a quiet man who refuses to rage against the machine — and instead takes one step at a time — it stirs the soul.

The film of the same name, directed by Destin Daniel Cretton (Short Term 12), follows the same model. Without a doubt, this is a film full of conviction. For Hollywood, it’s a slam dunk for this particular moment in our political history. The story isn’t trying to be brave in its presentation of racial discrimination; it is content to reveal its facts clearly. To do otherwise would draw attention to the fundamental truth that we are a country founded on a series of wrongs that we have doubled and tripled down on over the course of our existence with little to no shame.

Which begs a question of both the book and the film — where is the righteous anger? Watching this adaptation, from Cretton and co-screenwriter Andrew Lanham, it becomes immediately obvious that Stevenson couldn’t have been played by Denzel Washington — not in an alternative life where his story breaks through, say a decade or two sooner, during Washington’s moment. Washington would have eventually wanted to unleash his trademark fire and brimstone, that seductive fury everybody loves from him. (Just Mercy has drawn comparisons to the 1999 film The Hurricane, which starred Washington.)

Instead, we get Michael B. Jordan, a performer who knows a thing or two about righteousness and its rendering onscreen. Remember the unforgettable fire he brought as Erik Killmonger in Black Panther? Or the blazing, frustrated innocence he brought to Fruitvale Station? Though two very different turns, there is not an ounce of heedless self-righteousness in either, even when we think we know that these characters are wrong and blindly pursuing a dead end. Jordan convinced audiences of the deep-seated faith of these men and the lengths they were willing to go to live up to their beliefs.

And while Stevenson is cut from a similar mold, in terms of his faith in our system of justice and mercy, he refuses to succumb to his emotions, his outrage, even his fear in the face of abject human depravity. Jordan captures every instance where Stevenson tightens up, placing a lid on what should be his explosive reaction to the absurdity and hypocrisy he encounters, providing us snapshots of a man who would be a saint, an otherworldly role model.

What release we get comes from Jamie Foxx and it is indeed welcome. As Walter McMillian, a wrongly convicted man serving time and waiting for an inevitable execution, Foxx lets us appreciate that McMillian is past giving up. This is what it feels like to be black (and, as an afterthought, American) in this country. It is no country at all for black folks. Before cell phones, dash and body cameras, there were just plain old lies serving as testimonies that locked us away and strapped us into electric chairs when old fashioned lynchings attracted too much attention.

Justice and mercy were words without meaning, and it could be argued that they remain that way even now. Racism is as common and elemental as the air we breathe; it is a fact, but even facts are up for debate nowadays.

I suppose that is why rage and rebellion don’t matter anymore. Having read the book as part of a social justice book club, I wanted the film to provide a twist of sorts, to give into the passion and hurt, to seethe at the injustice on display. I wanted Jordan’s Stevenson to be transformed into a true social justice warrior, the fighter/king at the head of an army attacking the system and its nefarious forces.

I longed for these impossible alternatives. Why couldn’t Just Mercy be a thrilling legal rewrite in the vein of Quentin Tarantino’s Django Unchained or Once Upon a Time… in Hollywood — not just for the protagonists of the story, but far more importantly, for the many men serving on death row for crimes they did not commit. I want justice, but just this once, could we forego the gift of mercy on our flawed system? I’m tired of turning the other cheek. (Opens locally Jan. 10) (PG-13) Grade: B