Bengals Fans: Just a Friendly Reminder That Parking Meters Near the Stadium are Expensive AF on Game Days

It may not be news, but it's an important reminder that if you plan to park anywhere near Paul Brown Stadium on game days, you'll be forking out a pretty penny to do so. And not just in special event lots. 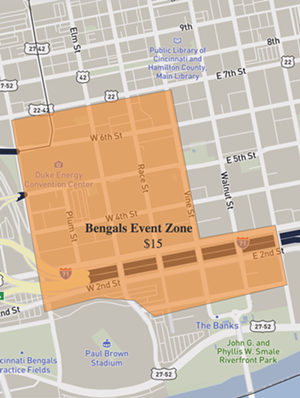 Last year, the City of Cincinnati announced a new parking zone initiative during Cincinnati Bengals games. The "Bengals Event Zone" spans from Central Avenue to the west to Joe Nuxhall Way to the east, between Freedom Way and West Seventh Street.

"If you’re a football fan headed Downtown to watch the Cincinnati Bengals, your parking options on game day have gotten a lot simpler," a press release from the City of Cincinnati explains.

The zone is enacted on game days and charges a flat rate of $15 beginning four hours before kick-off. For Sunday day games, the zone is in effect from 9 a.m. to 5 p.m.

"Motorists can now pay the fee when they park their vehicles and not have to worry about extending their meter time during the game," the press release states.

The City of Cincinnati says it's to make parking more "convenient" because we can assume no one but Bengals fans will be willing to pay $15 to park there.

The "Bengals Event Zone" has over 400 meters within its territory and the meters within the zone will indicate if they are included.

So, if you're a Bengals fan and want to avoid the $15 flat rate, or an innocent human trying to enjoy some fresh air at Smale Riverfront Park or grab a drink at The Banks, it's best to park on the outskirts of the zone and catch the streetcar, or bird or bike or Uber... you get the idea.