Trust us, you will believe Bob Odenkirk is a natural born killer, and he delivers the blistering, bloody blast of action that everybody deserves right now. 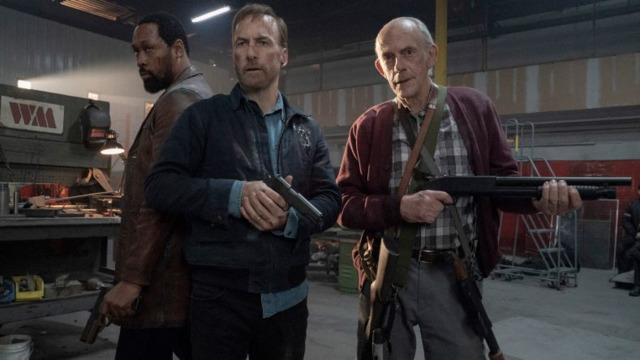 Photo: Allen Fraser/Universal Pictures
Let's all give thanks to the movie gods and goddesses that they have gifted us the ability to watch RZA, left, Bob Odenkirk and Christopher Lloyd all kick serious ass.

First things first, make sure you see Nobody as soon as it’s released.

Why? It’s fucking incredible, that’s why.

It’s the best stand-alone action film to be released since 2019’s John Wick: Chapter 3—Parabellum, and further proof that given the right material and the right creative team, anyone, even Bob Odenkirk, can be a badass, bone-breaking action star.

Of course, it helps that Nobody was written by Derek Kolstad, who penned all three films in the John Wick franchise, and it explains why Nobody — specifically, the character of Hutch Mansell (Odenkirk) — feels as if he fits perfectly in the Wickian universe.

The bigger deal, to me, is director Ilya Naishuller, whose first feature, 2015’s Hardcore Henry, felt more like an experimental exercise at creating an entire action film from the point-of-view of an unseen protagonist.

With Nobody, Naishuller takes his rightful place as one of the best action directors working today given how he frames certain scenes and the way he orchestrates and executes the full-throttle hand-to-hand and gunfight sequences throughout. It’s just ridiculously impressive.

More than anything, Nobody is just the most fun you have had watching a movie in a long time, well before COVID-19 sacked the theater industry and caused Hollywood to completely rethink how it moves forward.

Make no mistake, Nobody is not going to win any awards for originality. In fact, you’ve seen parts of this movie many times before, but that’s also a big reason why it works. You’ve never seen those parts done this way before.

Whether it's Arnold Schwarzenegger playing secret spy while walking a tiny Chihuahua in True Lies, or Keanu Reeves as a retired assassin shooting a bajillion bad guys because they killed his dog, there have been plenty of great, good and awful movies made about people with a particular set of skills living a life of anonymity until that one thing happens.

In Nobody, Odenkirk’s character, Hutch, is the perfect suburban schlub. He has a wife (Connie Nielsen) whose face is plastered on benches as a realtor, a teen-aged son who thinks he's a loser and a younger daughter who still thinks he hung the moon. Hutch leads a completely benign existence. He works an office job, he misses trash pickup every week, he visits his father (Christopher Lloyd) in an assisted-living facility.

And then, that thing happens.

In this case, it’s an ordinary, random break-in, a guy and his girl struggling to pay bills and care for a sick child, who enter Hutch’s ordinary house looking for high-value items. Hutch sizes them up and decides not to engage. Then his son leaps into action. Hutch still doesn’t react, even with a gun pointed in his face. He lets them leave. His kid explodes at the decision, the responding cops treat him like a coward and his buff neighbor boasts about how he would have handled things differently.

And then his daughter can’t find her favorite bracelet, the one with cat charms on it, which was likely in the decorative bowl that the thieves took.

Suddenly, Hutch is transformed with purpose. He tracks down the couple. “Give me the goddamn kitty cat bracelet, motherfucker!” he screams, only to discover they don’t have it.

And then he gets on a city bus, defeated and deflated, only to have the driver stop for a pack of drunken hooligans who immediately start harassing the few people using public transit at that hour. A switch goes off in Hutch's head.

The resulting mayhem, which Naishuller depicts with the delirious glee of a kid on a sugar bender, tells us a lot about Hutch. Mainly that he was the guy in the shadows that the government brought in to fix things without anyone knowing. An auditor, they called him, until he retired. And that he was lethally efficient.

It’s also one of the best tight-quarters, free-for-all brawls that you’ve ever seen. Especially with a guy like Odenkirk holding his own.

Best of all, that’s just the beginning, the launch pad from which Nobody really takes off.

What follows is a raucous, bloody, blistering assault on your senses complete with imposing Russian mobsters (seriously, the main bad guy, Yulian Kuznetsov, is a terrifying sumbitch), not one but two montages where the good guys stock up on weapons and set a litany of hazardous traps, and the beautiful sight of RZA and Lloyd (Doc Brown himself) mowing down baddies with automatic weapons.

Nobody is just relentlessly cool.

This is one of those rare movies that feels effortless, like you’re hanging with the coolest kid in school and catching a contact high just from being in his or her orbit. You don’t want the experience to end, and when it finally does, you’re immediately ready for more.