Cincy Brew Ha-Ha returns for its 10th year with 75 comedians and more than 120 beers. 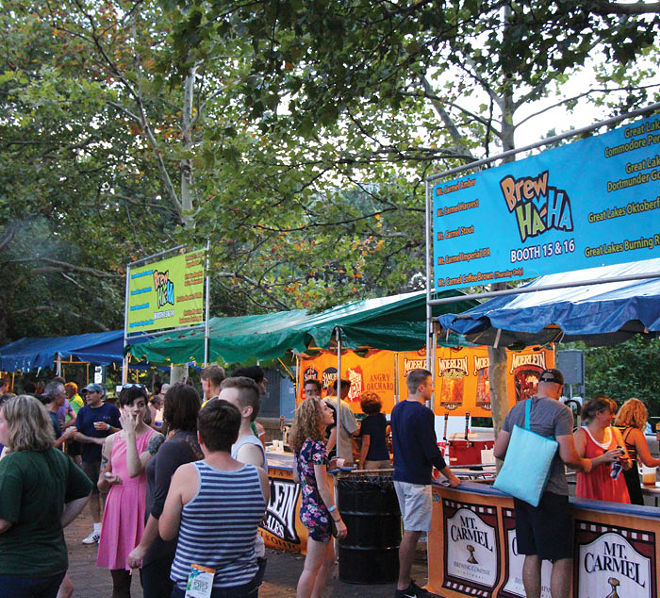 The Brew Ha-Ha stage will be a welcome change for Porter, who performs Thursday. He’s on the road headlining clubs almost every week of the year, so when he’s home in Los Angeles, the last thing he wants to do is go to a bar or nightclub. “I just hold on to my couch for dear life,” he says. “I don’t do much. I just hang out. I like to watch movies, play some sports. I just try to be as normal as possible when I’m not on the road.”

He has been dating, though, and talking about that on stage as he develops the follow-up to his current television special Ugly and Angry. “There’s a lot of stuff about the dating scene and dating in kind of an app-based society,” he says. “I’m still angry, but it’s just about different stuff now.” Porter doesn’t use any of the online dating services, not because of any perceived stigma, but because it’s just not his thing. “By some people it’s not looked down upon,” he says. “But the stigma has been lifted. When pretty girls started doing it that helped. ‘Oh, it’s not just the dregs there are on eHarmony, there are actually some hot people here.’ ”

Friday night headliner Bailey says, “I just write about whatever comes to me. I don’t have any set parameters to write in. If something hits me funny, I write about it. Doesn’t matter what it is.”

The comedian, actor, musician and game show host does mostly observational humor, and he’s always on the lookout for something to write jokes about. “The longer I do this, the easier it is for those things to come to me,” he says. “I’m just tuned in more to my own writing, and on stage it becomes more and more me talking. That’s not all it is, but it just feels that way.”

In November, he will launch a new web platform called 3BTV.net. In addition to his new hour-long special, it will feature short films, animation and music, all created by Bailey. The music, though, won’t be humorous.

He’s played the guitar since he was 12, but never thought he’d be a professional musician. “It was just something I loved, and after starting stand-up I thought, ‘I’m just going to keep music as a hobby,’ ’’ he says. “But now I’ve recorded a bunch of original stuff and just want it out there so people can listen to it.”

He was never tempted to mix the two disciplines. “I never had an appetite for that, and no offense to the people that do it. I never wanted to mix them at all. Stand-up is stand-up and music is music, and they are totally different things to me.

“There are guys that write beautiful songs about disgusting things, and I’m like ‘Why don’t you just write a good song?’ ” he continues with a laugh. “Tell the jokes. That’s just me. No judgment, they just never mixed for me.”

Similarly, Sparks is a multi-talented performer who not only does stand-up, but acts, hosts and plays music, the latter mostly with his band Zero 1. He’s also a Queen City native — sort of.

“I was born in Cincinnati but I grew up in Peaks Mill, Ky., near Frankfort,” he explains. “My mom was visiting my grandmother in Cincinnati when she went into labor. … So I was born at Christ Hospital.”

While many kids in the ’70s grew up watching the era’s iconic sitcoms, Sparks got interested in comedy from another route. “Growing up we did not have a television, so I listened to comedy records, music records and some radio. The public radio station would play, on weekends, The Shadow, The Jack Benny Show and Burns & Allen, and I would listen to those.”

Movies were also a big part of his life. “It was basically day care,” he says. “My mom knew the theater owner at the mall and during the summer, especially, she would drop me off there and I would watch the same movie six times until she got off of work.”

It was around that time he had notions of being Hans Solo or Indiana Jones. For real. But then he realized something. “There’s one guy that gets to be both of those, so then I wanted to be Harrison Ford. If you were him, you could do all those things and have all that fun. That was my 11-year-old logic.”

After his parents divorced, he moved to Chicago when he was 14 and became involved in acting, stand-up and TV hosting. At 19, he hosted a game show on local TV in the Chicago area. Soon, though, he was off to Los Angeles. Over the years he has contributed to VH1’s various I Love… programs, hosted Talk Soup on E! and had starring roles in Queer as Folk (as Michael Novotny) and the Disney XD series Lab Rats as Donald Davenport. He’s also had film roles, and in 2009 recorded his stand-up special Charmageddon.