The show that tells the story of American founding father Alexander Hamilton has created a revolutionary moment in theater. 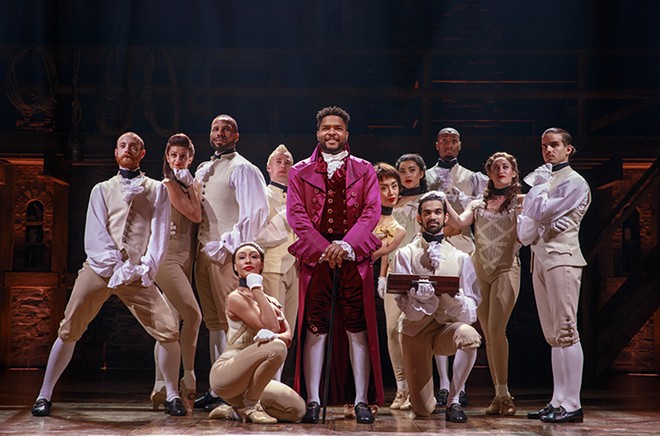 A touring company of Lin-Manuel Miranda’s blockbuster Broadway hit, Hamilton, is on its way back to Cincinnati for a second appearance at Downtown’s Aronoff Center for the Arts. It will be onstage Sept. 6-Oct. 2.

The show that tells the story of American founding father Alexander Hamilton has created a revolutionary moment in theater. It’s a tale of our nation from more than two centuries ago, but told by America now. A cast of 19 – almost all Black and brown performers – is propelled by a score that blends hip-hop, jazz, R&B and Broadway. Hamilton has had a profound affect on culture and politics well beyond most Broadway musicals.

The term “blockbuster” repeatedly describes this production, and it’s justified. Alexander Hamilton was America’s first treasury secretary, and he would be amazed that his story told onstage earned back its $12.5 million investment in less than a year after its 2015 debut; that’s an astonishing feat, as most Broadway shows do not make back the money investors put into them. Other than the pandemic disruption (which closed everything on Broadway from March 2020 to September 2021), Hamilton continuously has sold out its Broadway performances. It reopened a year ago and continues to sell at an unbelievable clip, already playing to nearly three million people. Through theatrical performance, recordings and streaming platforms, it has earned more than $1 billion.

In addition to the Broadway production, two touring companies are crisscrossing the United States and Canada. When tickets for the first tour stop in San Francisco went on sale in 2016, more than 110,000 were snapped up in 24 hours.

That company will be at the Aronoff, presenting a production as mind bogglingly complex as the one at Broadway’s Richard Rodgers Theatre. It requires 14 truckloads of cargo and a core group of more than 60 traveling cast, crew and musicians. Each tour has the goods and the talent to duplicate the original show’s choreography, which revolves around a pair of concentric turntables on the stage. The tour has two portable sets so that one can be assembled in advance of the next stop (The company at the Aronoff arrives here two days after closing in Toledo; two days after it’s finished here, it will be up and running in Columbus).

The Cincinnati stop will feature 32 performances during its four-week run – a week longer and eight performances more than it had here in 2019. Many likely will sell out (tickets went on sale May 19). Prices range $59-$179 with a select number of premium tickets from $249. The Aronoff’s Procter & Gamble Hall has 2,700 seats that will add up to an attendance figure of roughly 86,400.

During the local shows, pay special attention to the choreography – the work of a talented Cincinnatian, Andy Blankenbuehler, a graduate of St. Xavier High School.

There’s a good reason for all this success. Hamilton won just about every theater award possible, including the 2016 Pulitzer Prize for Drama. It swept the 2016 Tony Awards with 16 nominations and 11 wins, including Best Musical, Best Book of a Musical, Best Original Score, Best Costume Design of a Musical and many more.

The show’s original cast recording debuted in 2016 on the Billboard 200 albums chart with the highest entrance for a cast recording since the West Side Story soundtrack in 1963. It went on to win the 2016 Grammy Award for Best Musical Theater Album. It has sold more than 3 million copies, making it “Triple Platinum.”

Hamilton expanded its reach in July 2020 when a video of the Broadway production streamed on the Disney+ platform. During a two-week period, it racked up 2.7 million views, compared to the 2.6 million people attending 2,000 Broadway performances.

What’s behind all this enthusiasm for what, to many, first sounded like a joke, a hip-hop musical about one of America’s founding fathers? Here’s the backstory, as Miranda told CNBC in 2017: Miranda went on vacation in 2008 with a copy of biographer Ron Chernow’s 832-page Alexander Hamilton that he had snagged in an airport bookstore. The Broadway star immediately was struck by Hamilton’s early life, born out of wedlock in St. Croix, orphaned and transplanted to New York City where revolution was brewing. Hamilton eventually died in a duel. In a 2015 interview with The New Yorker, Miranda noted the similarities between Hamilton and rapper Tupac Shakur. Words poured out of Hamilton, not unlike Shakur, who was shot to death in 1996. The seeds of Miranda’s phenomenal musical were planted, and like Hamilton and Tupac, words then poured out of Miranda.

In fact, on the original cast recording, there are 20,520 words. It’s two hours and 23 minutes long, meaning the music averages 144 words per minute (at the pace of the typical Broadway show, it would take nearly six hours to perform these many words). “Guns and Ships,” sung by the Marquis de Lafayette, speeds by at 6.3 words per second, and Angelica Schuyler’s “Satisfied” rips along at five words per second.

A word of advice: If you haven’t seen the show, give the cast recording a listen in advance. You’ll get more out of the live performance that way.

As with Hamilton’s Broadway production, there will be a “HAM4HAM” ticket lottery, providing $10 seats for 40 lucky recipients to attend each performance — inspired by Hamilton’s face on the U.S. $10 bill. For details, go to hamiltonmusical.com/lottery.

Even if you’ve already seen Hamilton, it’s worth returning, especially for a live performance. When the tour was in Cincinnati in 2019, it was every bit as good as the original Broadway production.