The Jazz Age tale about a young man eager to make a name for himself arrives just when Allen needs it most — when he really needs a film with the right combination of intellectual heft and effortless bounce in the interplay of characters. 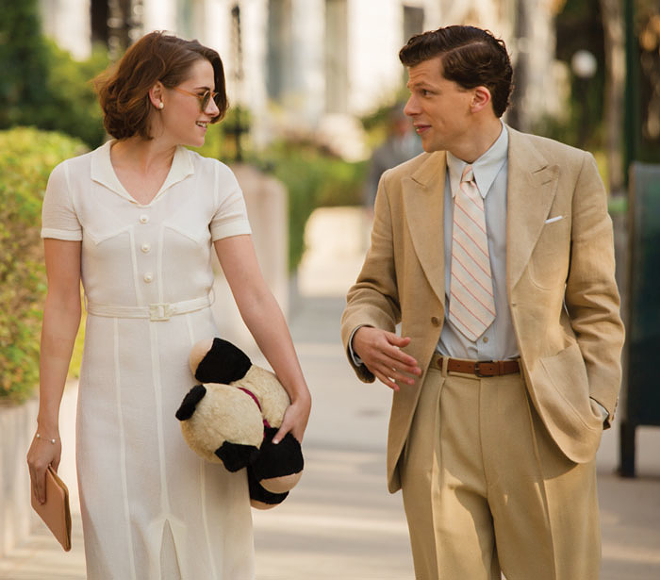 While known for his signature neuroses, writer-director Woody Allen has been able to couch this fixation in a world of his own creation that, at its best, displays a deft sense of controlled spontaneity.

When paired with the right performers, as in recent hits Vicky Cristina Barcelona and Blue Jasmine (where his actors didn’t feel the need to ape the stuttering delivery we’ve come to associate with Allen when he’s onscreen), his words and humor zing playfully and hit his philosophical targets dead center. But in failing efforts like You Will Meet a Tall Dark Stranger and Magic in the Moonlight, the narratives and characters appear to be set adrift with no hope of land or bliss in sight.

Magic in the Moonlight (2014) and last year’s Irrational Man both felt like empty chamber pieces, their stories locked in the heads of protagonists played, respectively, by Colin Firth and Joaquin Phoenix. They lacked the charm and/or the engaging wit capable of winning us over.

As a filmmaker known for his clockwork precision and output, a third miscue could initiate a whisper campaign about his touch that might derail future projects.

But the new comedy Café Society comes to his rescue. The director finds a comfortable groove in this Jazz Age tale. So it arrives just when he needs it most — when he really needs a film with the right combination of intellectual heft and effortless bounce in the interplay of characters.

Young Bobby (Jesse Eisenberg) is a Bronx kid of his day and age — the 1930s — eager to make a name for himself. He’s smart and willing to work hard, but he’s a bit of a romantic dreamer.

With few prospects in the old neighborhood, he sets off for Hollywood where his uncle Phil (Steve Carell) lords over the scene as an agent to the stars. Phil is always on the verge of sealing the next big deal between one of his superstar clients and the hot and hungry studio of the moment. After weeks of waiting in limbo, Bobby secures a meeting with Phil, and his life finally takes flight.

He starts making the right connections and hooks up with Phil’s secretary, Vonnie (Kristen Stewart), a seemingly more pragmatic former aspirant to the bright lights of the big city. But he doesn’t realize that she’s actually involved with his married uncle.

Once his faith gets shaken, Bobby heads back to the East Coast, where he hooks up and hustles along with his older brother Ben (Corey Stoll), a shady nightclub owner. Scaling the ranks into high society, Bobby believes he’s made it without compromise until Vonnie and Phil re-enter his life, calling everything into question.

That synopsis sounds like a solid paraphrasing of the voiceover narration Allen provides during the course of the film. He’s telling a straight and true story, and he knows it. He feels no need to dress it up as anything other than what it is.

Bobby is the prototypical romantic whose balloon gets savagely punctured, sending him spiraling down to Earth, and once he picks himself up, he lays the fantasies to rest.

What gives the film life is the punchy spirit of Eisenberg. Too often actors cast as the Allen surrogate take it upon themselves to put their own imitative spin on the Allen tics and neuroses, but Eisenberg refuses to play that game. While his Bobby might be cut from that cloth, Eisenberg instead hones in on the youthful passion inherent in the character that then becomes jaded once Vonnie chooses Phil over him.

That decision transforms Bobby and the entire film into an intriguing alternative version of the arc of Jay Gatsby, from F. Scott Fitzgerald’s classic tale. Gatsby spends his life attempting to make himself into the kind of man that can win back his great love.

It is a single-minded task that proves to be his undoing, whereas Bobby — thanks to the subtle differentiation of character realized in Eisenberg’s performance — doesn’t lose himself as completely. His romantic side re-emerges, but we see that he’s smarter than both Gatsby and his similarly doomed older brother.

So Allen staves off the looming naysayers with a film that will likely appeal to a literate niche, all but forgotten in this day that is sadly a long way removed from the Jazz Age. (Opens Friday at Mariemont and Esquire theaters) (PG-13) Grade: B+