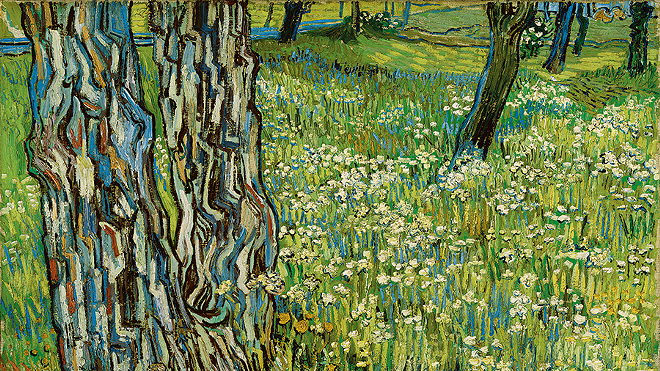 Photo: Courtesy of the Kröller-Müller Museum, Otterlo, The Netherlands
Vincent van Gogh’s “Tree Trunks in the Grass”
The engaging and intimate exhibition Van Gogh: Into the Undergrowth, at Cincinnati Art Museum through Jan. 8, 2017, is an invitation into the way artists think and interact with one another through their work and friendships. This show gives the viewer a direct look not only at the resultant works, but also at the thoughts that led to them.

Centered upon the museum’s own “Undergrowth with Two Figures,” which van Gogh painted in 1890, the exhibition features 20 artworks borrowed from museums internationally, plus ones from its own collection of French paintings and works on paper.

In “Undergrowth with Two Figures,” two enigmatic people, a man and woman, are seen at a distance among trees set in a lovingly, intricately detailed forest floor. It is the forest floor that van Gogh was interested in —that and the tree trunks. The sharply horizontal canvas is awash in undergrowth up to within inches of the top. It is bisected by a tree trunk, set only slightly to the right of center, running from nearly the bottom to the absolute top. These are daring concepts even now — that tree trunk could ruin the painting in lesser hands.

Industrialization was taking hold in Europe when van Gogh painted this. As people left the countryside to move to urban areas, the structure of life was changing. Our natural human longing for what was left behind encouraged artists to turn to nature in its sylvan state, to pay close attention to such elements as forest undergrowth and tree trunks. The sous-bois, French for undergrowth, became a particular object of interest.

Van Gogh, of course, was not the only artist nudged in this direction. The exhibition includes works by Théodore Rousseau, Paul Cézanne, Claude Monet and Paul Gauguin. Van Gogh himself returned again and again to what was on the ground, some of it lush and some, as in “Trees on a Slope,” sun-struck and bare. It’s there early (“Girl in a Wood,” 1882) and late (“Undergrowth with Two Figures” was painted the year van Gogh died).

This is a show that invites close attention to detail. The artists were doing that, themselves, although interpreting rather than precisely recording, says Cornelia Homburg, an art historian and van Gogh expert who contributed an essay to the exhibition catalog and also spoke at the museum not long after this exhibition opened in October.

“We could talk about tree trunks forever,” she told her audience, in a nice departure from professional jargon, and went on to say van Gogh’s visual memory was strong and precise and that the sunshine on the ground produces “an experience of shadow.”

An important element of Into the Undergrowth is quotations from the artist’s letters to his brother Theo, his strong supporter and perhaps also his most intimate friend. The influence of Japanese art on his own work, for instance, comes out in a letter to Theo: “If we study Japanese art, then we see a man, undoubtedly wise and a philosopher and intelligent, who spends his time (studying) a single blade of grass. But this blade of grass leads him to draw all the plants...” Reading van Gogh’s words leads us to look again at his own blades of grass.

Into the Undergrowth is accompanied by a supporting exhibition, Unlocking Van Gogh’s World, featuring French Impressionist and Post-Impressionist prints from the museum’s collection. Our sense of that volatile period in the art world is broadened by the inclusion of these works by Renoir, Toulouse-Lautrec, Pissarro, Whistler and others, in addition to van Gogh. Ideas were flying around, artists were ready to invent and then to refine; it was a heady time. I suppose, in a sense, given the continuing popularity of these artists, we’re not over it yet.

This is not a world-shaking exhibition, but rather a fresh take on the man who, to many, symbolizes what an artist is. It also is a fresh take on his colleagues and his circle.

Admission to VAN GOGH: INTO THE UNDERGROWTH is free to museum members and $10 for adults, $5 for children ages 6 to 17. That price also includes admission to Kentucky Renaissance: The Lexington Camera Club and Its Community, 1954–1974. More information: cincinnatiartmuseum.org.