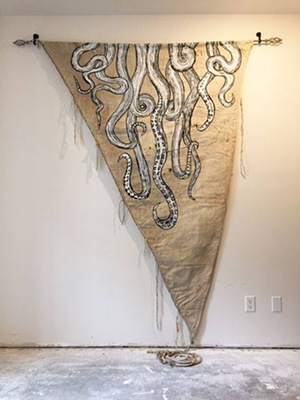 Provided by Wave Pool Gallery
One of the pieces in "Beyond the White Savior."

Wave Pool's upcoming show Beyond the White Savior features artwork by Kenyan and American artists, using repurposed material and found paints and objects. As a collective, the artists speak on social justice issues in Kenya. Many of the paintings featured use the worn sails of dhows, which are sailboats often used in the Indian Ocean. Kenyans also know them as Swahili Jahazis.

From 4-9 p.m. on Saturday (Jan. 26), the exhibit's opening night, Wave Pool will screen Nairobi Half Life, directed by David "Tosh" Gitonga. The film follows a young man named Mwas who lives with his parents in rural Kenya. To make a living, he sells Western action films. An aspiring actor, he hopes to join a theater company in the city of Nairobi. But within minutes of arrival, he's robbed and somehow lands in jail, where he meets a crook and joins a gang. At the same time, Mwas lands a part in a play and finds himself trying to make sense of the disparate worlds. In 2012, it became Kenya's first-ever Oscar submission for consideration in the best foreign language film category.

There will be a post-screening conversation about both the film and the art led by Jamey Ponte, an East African artist and activist. With over 15 years of experiences "living in urban slums, villages and extremely rural bush, Jamey shares a seldom heard truth about perspectives of sustainability and conflicts in wildlife conservation, human rights issues and environmental approaches," according to a press release.

Following the screening and show opening, Wave Pool will also welcome U.K.-based social practice artist Sophie Lindsey for this year's first "Art Space is Your Space" five-week residency. (The soft opening is from 6-9 p.m. Saturday, Jan. 26. Read our feature here.) As part of her project "Funniest Joke in Cincinnati," Lindsey and the gallery are collaborating on a traveling joke booth in an effort to understand the city’s sense of humor. On Feb. 2 from 2-4 p.m., Wave Pool will host a series of drop-in "chicken making workshops" in the first-floor gallery. The residency will culminate in a parade that will take the chickens across the road Feb. 23.

On Feb. 1, another exhibit will open: Lost and Found. Visitors can drop in from 4-6 p.m. as the gallery showcases 15 works made by Camp Washington artists. Co-organized by artist Sean Mullaney and Wave Pool’s Executive Director, Cal Cullen, the exhibition was created to celebrate the "overlooked beauty and rich history" of the neighborhood.