The large chalkboard-style interactive artwork is part of the second phase of the "No Spectators: The Art of Burning Man" exhibit 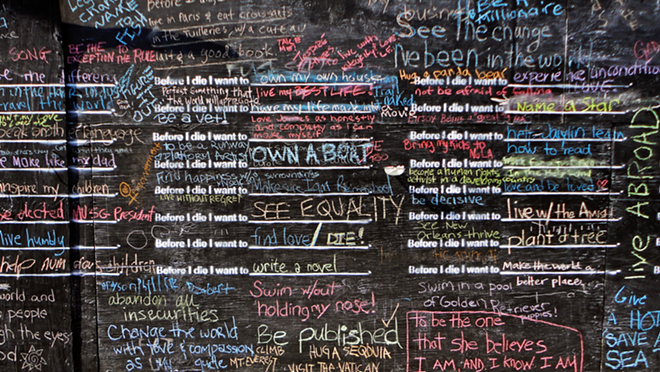 With her ongoing “Before I Die” project, Candy Chang has become a leader in the burgeoning field of participatory public art.

To date, since the first one appeared on the outside of an abandoned New Orleans house in 2011, there have been more than 5,000 blackboard-like “Before I Die” walls created in some 70 countries — including one just installed at the Cincinnati Art Museum as part of the second phase of its No Spectators: The Art of Burning Man exhibit. She created it in 2018.

On its own, Chang’s “Before I Die” is a rather simple piece, consisting solely of chalkboard paint, spray paint and dustless chalk. The wall now at the art museum is 8 feet high and 42 feet long — it occupies roughly a half of a second-floor balcony’s overall space.

Boldly stenciled at the top are the words “Before I die” and ellipses. Below that are vertical columns that feature the phrase “Before I die I want to,” followed by long white lines.

It’s the unsigned responses written in color chalk by visitors on those lines — and elsewhere on the wall — that elevate the impact of “Before I Die.”

So far, the responses in Cincinnati have been both narrowly specific and abstractly all-encompassing; funny and tender. A few can be smartass. At their best — and there are many examples of such — they are profoundly existential, since the wall gently forces people, especially young people, to confront mortality.

Some examples of responses from just the first weekend of “Before I Die” at the museum: “make healthcare affordable;” “confirm life beyond Earth;” “have no regrets;” “swim backwards across the Bay of Fundy;” “adopt a child;” “help people;” “be on Ellen;” “get Joey Votto autograph;” “sell my art;” “pet more cats;” “yodel on top of the Swiss Alps;” and “love myself.” Many contributors want to travel, especially to Burning Man.

On the recent opening weekend of No Spectators’ second phase, people were filling up all of the available “Before I Die” wall space so quickly that museum staff had to erase the board at the end of the first day and again two days later (after first photographing the filled-up wall for posterity’s sake).

Chang finds this level of response and the thoughtfulness of replies very moving. She conceived “Before I Die” after losing a close friend and confronting a long period of grief. She sees the piece as a modern-day memento mori — Latin for “Remember you will die” and a term used for the practice of reflecting on mortality.

“After I lost my loved one and spent a long period in grief and depression, I wanted a way to restore perspective and find consolation with my neighbors,” she told CityBeat via email. “I never expected it to go beyond my neighborhood in New Orleans, and it’s been one of the greatest experiences of my life to see this little experiment on an abandoned house grow into this global project — all thanks to passionate people around the world. Each wall is unique and reflects the people of that community. Each wall is a tribute to living an examined life. And each wall reimagines our relationship with death and with one another in the public realm.”

Born in Pittsburgh to Taiwanese immigrant parents, Chang grew up in Lima, Ohio. She holds a master’s degree in urban planning from Columbia University and undergraduate degrees in architecture and urban design from the University of Michigan.

Chang has a busy career. Even as her wall was being installed in the art museum, she was working on her newer “Confessions” piece for the just-opened Wonderspaces exhibit in San Diego. Inspired by both Japanese Shinto shrine prayer walls and Catholic practices, it asks visitors to go into a private booth and contribute a confession on a provided wooden plaque.

Another recent project of hers was 2018’s “A Monument for the Anxious and Hopeful.” Another variation on her quest to have people express their thoughts on life — and death — publicly but anonymously, it opened at New York’s Rubin Museum. She and collaborator James A. Reeves got more than 55,000 people to declare in writing their goals and fears, which they are analyzing with psychologists and researchers to see what can be learned from the responses.

The fact that “Before I Die” was displayed at Burning Man in 2012 helped underscore how the event’s organizers see it foremost as an experiment in sensitive, humane new urbanism — creating a utopian metropolis, Black Rock City, out of nothing — rather than merely as a party or festival with scattered art in the remote Nevada desert.

There obviously have been more “Before I Die” walls created around the world since 2011 than Chang can personally build or supervise. She believes that the concept should be free to anyone, and offers support to others via her website, beforeidieproject.com.

Students at the Art Academy of Cincinnati created such a wall outdoors in Over-the-Rhine in 2017. Among Chang’s guidelines are that all walls use the word “die” rather than shy away from it, and that messages written by participants be free of logos, slogans, website addresses and hashtags.

Overall, she sees her art — when done outdoors — as a means to challenge the commercial visual clutter that dominates cities, especially billboard advertising and public digital screens with their vacuous messages and promotional content.

“Our public spaces are for everyone, but if you take a quick look at the messages on display, it seems like we only value commerce,” she said in her email replies. “There’s no acknowledgement of the grief-stricken, of the anxious, of the fact that we’re all walking wounded. No wonder loneliness and social isolation are becoming a public health crisis.”

“My work seeks to address this by creating rituals for emotional communion where we can share our inner lives in public,” she continued. “By providing opportunities for neighbors and passersby to confide in one another without fear of judgment, our built environment can offer profound moments of communion and kinship.”

No Spectators: The Art of Burning Man is at the Cincinnati Art Museum through Sept. 2. More info: cincinnatiartmuseum.org