his winter I upgraded my point-and-shoot camera to a mirrorless Sony NEX. Finally having a nice camera to use, I googled “photography contest” and came across a curiously titled site called Capture Cincinnati. I’d never heard of this wondrous website where both amateur and professional shutterbugs could upload their snazzy shots of Greater Cincinnati and have crowd-sourced strangers and friends vote on the best ones.

Although the site is called “Capture Cincinnati,” it’s actually based thousands of miles away in the verdurous Pacific Northwest. In 1997, Chris Fenison and his dad co-founded Pediment Publishing in Vancouver, Wash.; they’ve published more than 500 coffee table-type books on topics like fine arts and cooking. Fenison, who has a passion for photography, created the Capture series in 2007 when he used Cincinnati as the proto-Capture city (there are now more than 12 cities in the Capture realm) for the debut Capture Cincinnati book, sponsored by then-media partner, Cincinnati Enquirer.

“The idea at that point was just to create a cool book,” Fenison says. “A book that was the best of Cincinnati in photography by local photographers was kind of the concept.” They started a website for photographers to upload photos to be voted on, and once the favorites were chosen and published in the book, the site shut down until the next year. The same modus operandi followed in 2008 and 2009 but ended soon after the third volume because the Enquirer ceased sponsorship, which left Capture Cincinnati without a trajectory.

“Then it dawned on us: We have so many users and so many photos and so much activity on the site that it’d be great to keep it up year-round, whether or not there was a book being published,” Fenison says. “So we launched Capture Cincinnati again, in its current form, in July of 2012 and it’s been up ever since.” The comeback has amassed more than 20,000 new photos; last month, Fenison reported 400 new users. In conjunction with the re-launch, Capture asked users to post photos from last summer’s World Choir Games, with the best photos published in Pediment’s World Choir Games book.

Mainly a word-of-mouth site, the social sharing feature attracts new users daily. Users don’t necessarily have to reside in Cincinnati, but they do have to follow one rigid rule: photos need to be snapped locally. “Whatever feels like the Cincinnati area to you, you do that,” advises Fenison.

There are many opportunities for photogs to have their work underscored — “Photo of the Day” and monthly challenges — and anyone who uploads a photo can check a box that gives permission for their photo to be potentially published in this year’s Capture Cincinnati IV book (photographers maintain rights to their photos). But if you submit, say, a blurry iPhone photo of Whiskers the cat, you will probably not curry favor with voters. “We’re not looking for just photographers, we’re not looking just for amateurs — we’re just looking for good photos,” says Fenison.

Users on the site can write a profile and link to their professional websites and such, and as Fenison explains, it’s sometimes a good way to get discovered. Cincinnati USA has culled photos from the site, and through Capture My Chicago, TV network ABC purchased a user’s Chicago skyline pic that now proudly hangs in the office of Lockhart/Gardner, the fictional law firm of the hit show, The Good Wife.

Sure, great photos abound on the site, but with the egalitarian method (amateurs and professionals, unite!), it begs the question in this digital, camera-phone happy epoch: Can just anyone be a photographer?

“I would say that there’s still skill, there’s still an innate ability to see a frame and capture it the right way,” Fenison says. “And although there are devices — smart phones and everything else that can take a picture and then you can apply selective focus and filters and everything else to it — it still kind of comes back to the basis of photography: How is it framed, what’s your subject, what’s the focal point? Despite all of the technology that’s out there now, there’s still a difference between someone who is a good photographer and someone who is just snapping pictures and applying filters to it.”

Fenison flexes his acumen for good photos when he votes on the Editors’ Choice photos and helps pick photos for the books. Sifting through a passel of photos can be daunting, but voting whittles it down to the top tier. Then, Fenison and other Pediment staffers decide what 200 or so shots will appear in the book. “Our involvement is really just kind of an oversight,” says Fenison. “When it comes to picking Editors’ Choice, we do put our heads together and kind of come up with one that’s a little bit different than what the people have chosen with their votes.”

Fenison has visited Porkopolis on a few occasions and says, “The photos of the Roebling Bridge are always fun to look at. And maybe it’s just because when I visited Cincinnati and driving over that bridge, it was, ‘Oh, I’ve seen this photo a million times.’ It felt like it was in a movie or something.” (No wonder — the bridge was prominently featured in the Oscar-winning film, Rain Man.)

The Roebling is one of the finest structures we have to offer, which brings us to the current photo challenge: architecture. There’s a lot of historic buildings to zoom in on, but if you want to win a prize, don’t submit something that seems obvious. “We’d be looking for something that is iconic in some ways but not cliché, and that’s a tough balance to find a photo that captures the essence of Cincinnati architecture in one frame but isn’t the same thing you see over and over again,” Fenison says.

Despite not having a media partner to help promote the site, Fenison feels there’s enough independent interest to keep the Capture Cincinnati books and challenges going. “The vision is always to collect the best photography of Cincinnati, and as long as we can continue to do that and keep growing, then we’re in a good spot.”

Upload and vote for photos at capturecincinnati.com; pre-order CAPTURE CINCINNATI IV at pedimentbooks.com; buy other editions of the books at amazon.com. 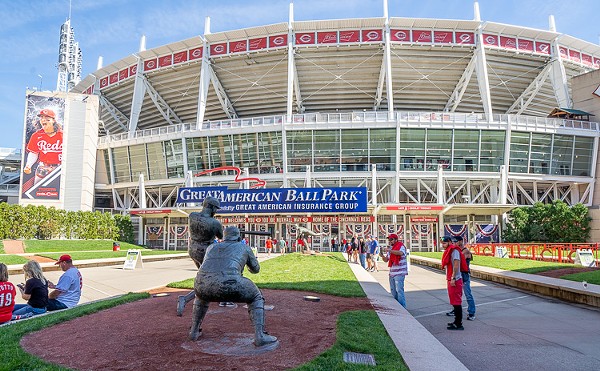