Choices are anything but simple in ‘Dheepan’ 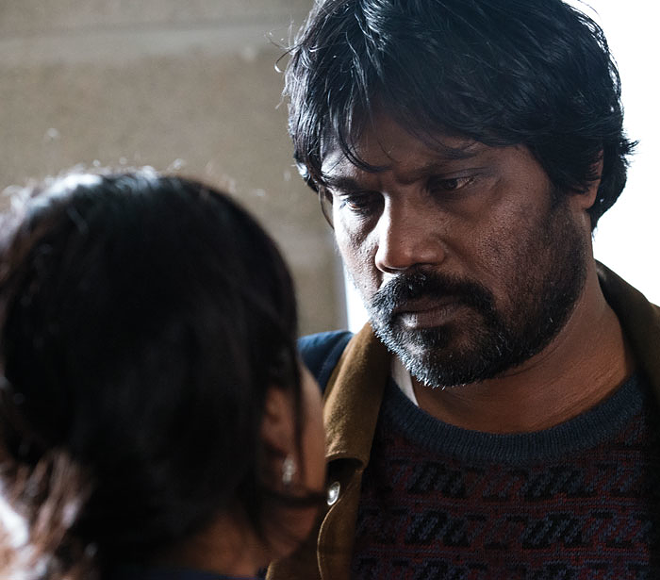 Choice often seems such a simple matter-of-fact thing. Back in 1991, the Hip Hop group Black Sheep summed it up like this on their song “The Choice is Yours”: “You can get with this, or you can get with that.”

But in Dheepan, the 2015 Cannes Film Festival Palme d’Or-winning release, French writer-director Jacques Audiard (The Beat That My Heart Skipped, A Prophet), sets out to challenge this simple notion by elevating the stakes. Can successive choices pave the road to redemption?

As a Tamil freedom fighter in the South Asian island nation of Sri Lanka, Dheepan (Antonythasan Jesuthasan) fought on what turned out to be the losing side of a long and bloody civil war. In the movie, it is more than implied that he did the kind of horrific acts that we often glamorize when committed by the rogue heroes in fantasy action movies, but that we recognize would be human-rights violations in the real world. And Dheepan, while fictional, is definitely rooted in the real world.

That makes it a textbook example of a thought-provoking “art” film rather than, say, a popcorn movie. Yet in different ways both often deal with the same question: What turns a person violent?

The movie Dheepan tells us it is important to consider that its namesake character may have made his decisions as a means of survival — of protecting and prolonging his own life and seeking an opportunity to escape. He did so without realizing how difficult it would be to ever break free of the cycle of pathological violence

In Jesuthasan’s performance, you see something ominous in his eyes, dead and haunted orbs that reflect nothing. They merely open up to a bottomless abyss where despair replaces air. When he flees his country, he does so with two strangers — Yalini (Kalieaswari Srinivasan) and her young daughter Illayaal (Claudine Vinasithamby) — whom he presses into posing as his family in the hope that such an arrangement will guarantee his bid for asylum in Paris.

That blatant and cold calculation, which at its core is little more than base instinct, seems to come out of the black-hole suns that are his eyes.

Audiard appears intent on asking if we are ever able to escape our choices. In his last film, 2012’s Rust and Bone, paths chosen led to relationships that offered the promise of redemption after difficult challenges. Dheepan the character shares a spiritual kinship with Rust and Bone’s troubled Ali (Matthias Schoenaerts) — each of them are men of few words and raw souls, quick to strike for any reason but especially in defense of dreams or their own complex and ambiguous sense of righteousness.

It is difficult to see Dheepan and his plight and not contextualize him within the current framework of immigrants seeking asylum throughout the world. France, the target of a string of attacks connected to ISIS, has the look of a still-active war zone in Audiard’s rendering. The suburban projects where Dheepan settles with his “family” are beset by gangster factions battling over territory like well-armed would-be global despots leading their fanatics to an oppressive drumbeat.

I can hear the cries now from conservatives about how and why we should prevent men like Dheepan (and by extension, women like Yalini and Illayaal) from entering our countries.

We see and imagine the violent extremism of his actions as a threat to our values, without acknowledging the intensity (the extreme violence) in our own worldview and the lengths we are willing to go in pursuit of our goals. But we make sure to play up the “justifiable” ends we’ve achieved as a nation, while remaining silent about our questionable means.

Are our choices any different than those of Dheepan?

Audiard makes sure to cast him in heroic terms, without the film descending into a pit of rah-rah posturing. Somehow, the escalating action, as it comes to a head, remains grounded in the tough choices he makes, granting meaning and gravitas to the glorified rendering of violent set pieces.

Dheepan is a stirring and unflinching rendition of a legend near and dear to our American hearts. (Opens Friday at Esquire Theatre) (Unrated) Grade: A