The theme of The Mercantile Library’s Harriet Beecher Stowe Lecture series is “writing to change the world.” Few writers live up to that idea better than Chris Abani, who was imprisoned in his native Nigeria after the publication of his first novel, 1985 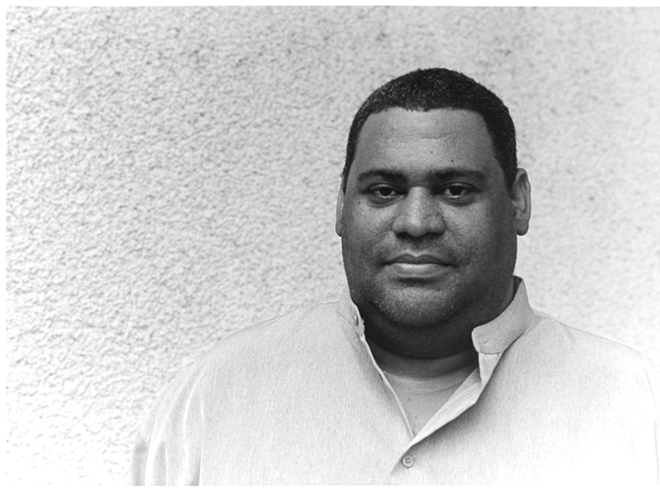 The theme of The Mercantile Library’s Harriet Beecher Stowe Lecture series is “writing to change the world.” Few writers live up to that idea better than Chris Abani, who was imprisoned in his native Nigeria after the publication of his first novel, 1985’s Masters of the Board. (The Nigerian government said it incited unrest.)

That experience only emboldened his belief in the power of the written word, spurring an output that includes two acclaimed novels (2005’s PEN/Hemingway Award-winning GraceLand and 2007’s The Virgin of Flames), two novellas and five poetry collections — all of which are marked by Abani’s evocative, darkly humorous prose and, not surprisingly, a keen preoccupation with characters yearning to express themselves amid challenging situations.

Exiled from his homeland for more than 20 years, Abani currently lives in Los Angeles, where he is a professor of creative writing at the University of California, Riverside. CityBeat recently tracked down the 45-year-old author to get his thoughts on his writing and how it has evolved over the years.

I think all writing is an attempt to change the world. Language itself seems to have evolved for that very reason — to express a philosophy and theology of being and to create a means of sharing it so that we could make evolutionary leaps very quickly. My writing seeks a much smaller and humble aim — to help me interrogate my humanity such that I can earn it. In this way I hope to transform myself into a better vehicle for hope. That my work reaches others, much less changes them, is a small miracle. My work exists to create a moment for us all to see ourselves in all our strange and savage beauty.

You’ve worked in a number of formats as a writer. What are, for you, the differences between writing fiction and poetry? Do you prefer one over the other?

I have always thought of writing as one continuum, maybe because I read all the books in my local library in a nonhierarchical manner. So I move between genres and forms with the sense of a nomad looking for a home always within language, but shaped by form. Different stories, different interventions require different forms. I have no formal preferences; I am always looking for better ways to hold the stories.

How do you think your writing has changed since your first novel was published nearly 30 years ago?

In many ways my stylistic imagination is the same from that book to the ones I work on now. I think I have grown deeper as a person, better able to access my savage beauty without judgment. I have grown a lot and lived a lot, so the writing is hopefully better, more graceful and expansive in its vision, humanity and worldview.

What spurred you to write a book about an Elvis impersonator (Elvis Oke, the teenage Nigerian protagonist of GraceLand)? Do you think America and its popular arts still have the same impact on cultures in other countries that it had when you were a kid?

American culture has become global culture and over time has been adopted, adapted and rearranged by the places it touches. Global culture, while having an American texture, is truly beyond the limitations of any one nation or people. I tried to show that in GraceLand. America as a country is young and hopeful, a teenager in terms of world time, so it seemed perfect to marry it to a teenager like Elvis and see their concurrent evolution.

Finally, what parallels do you see between your own need to express yourself through writing and the mural art of Black (the Los Angeles-based protagonist of The Virgin of Flames)?

I write fiction because it is a larger-than-life medium; it allows us to get to the truths that facts obscure. The characters in fiction are often an amalgamation of ideals, people we know, people we wish to know, all of it: They are bigger than any singular life can be because they need to be in order for the limitations of writing to even begin to hint at a small singular life in the world. For a writer to begin to see themselves in their work in any tangible way after the making is complete is to court hubris.