A year and a half ago, Caroline Winstel entered a climbing gym for the first time in her life. 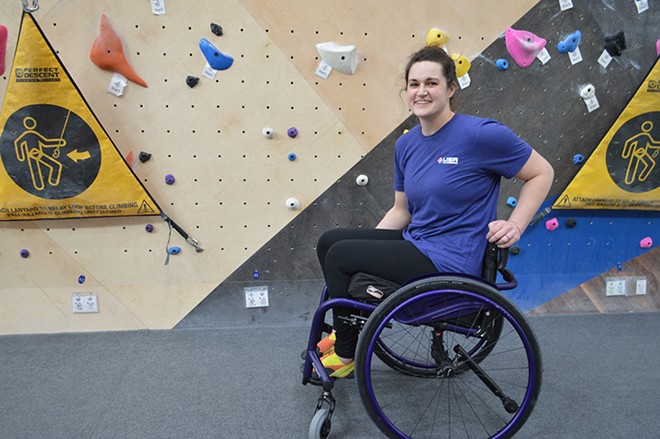 A year and a half ago, Caroline Winstel entered a climbing gym for the first time in her life. Today, she trains three times a week in that same gym — Climb Time Oakley — as a nationally ranked adaptive climber, member of Team USA Paraclimbing and advocate for accessible adaptive sports.

Winstel is training tirelessly to compete in her second USA Paraclimbing Nationals on March 26 and 27. Birmingham, Alabama, is hosting this year’s event at High Point Climbing gym, where Winstel’s performance could send her to compete a second time in the International Federation of Sport Climbing (IFSC) Paraclimbing World Cup.

Winstel thought her first competitive climbing experience would be a one-time thing, and it almost was when she mistakenly assumed her fourth-place rank in the 2021 Nationals wouldn’t qualify.

“I thought I had missed my shot,” she says. “And two months out, I was on the list and I was like what happened? Turned out you didn’t have to be top three to get an invitation. I had two months to train for my first international competition and I dug in.”

Going into the competition as an individual competitor allowed her status to fly under the radar briefly, but didn’t stop her from competing. She placed fourth at the IFSC Paraclimbing World Cup last year and says the sport redefined her relationship with herself and her body.

“Climbing has given me this opportunity to see my body and not hate it,” Winstel says. “For so long I hated my body, I felt like it betrayed me and let me down and all these really negative assumptions. So I made my goals for this year to love my body and love climbing to be priority number one. I can strengthen the muscles that will strengthen and that's really cool to see.”

Winstel has an acquired physical disability that manifested when she was 18. She was a volleyball player at Tusculum University in Tennessee when she collapsed in pre-season and couldn’t maintain playing shape after the incident.

Initially, doctors and coaches struggled to find the direction or diagnosis Winstel was searching for, which caused her to question her future as an athlete. She was eventually diagnosed with Rhabdomyolysis (a syndrome caused by dead muscle fibers being released into the bloodstream), hypermobile Ehlers-Danlos (a connective tissue disorder causing joint hypermobility) and postural orthostatic tachycardia (a blood circulation disorder). Today, she utilizes a wheelchair. 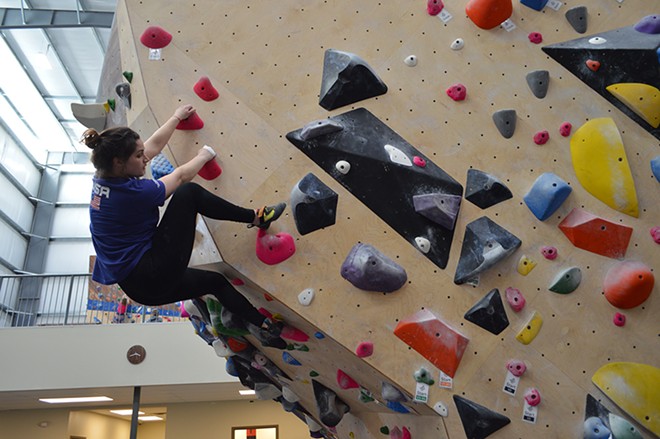 Winstel’s discovery of climbing and concrete diagnosis established a new future as an athlete. She has been so dedicated that the sport has affected other areas of her life, most prominently her collegiate journey toward gaining a doctorate of educational leadership at Northern Kentucky University. She says adaptive climbing inspired her dissertation, which she will defend the week before Nationals.

“That’s what (2021) Nationals did,” Winstel says. “It was a catalytic moment for the reconstruction of myself. I was no longer viewing myself as what I should have been at 18, as a college athlete, but more Caroline the climber, Caroline who has something to say. I didn't expect the emotional aspect to it, there's so much emotion tied into climbing but also in a competition realm when you are so outside your comfort zone. So I came back with this fire to open more doors. I was able to then see Nationals for what it was, which was this great entry point into the paraclimbing community.”

Winstel credits the supportive nature of the paraclimbing community to her successful navigation into the world of competing, saying her fellow adaptive climbers across the nation have normalized having a disability in ways she’s never experienced, and she wants to cultivate a more active community locally. She looks up to one of the most famous adaptive athletes today, Maureen (Mo) Beck, as both a competitor and advocate. Beck is sponsored by various companies including The North Face and uses her platform to improve accessibility to adaptive sports.

“Caroline takes her space. She decides she wants something and she goes and gets it,” Beck says. “I’m sure she’d love it if there was like a team of 10 with disabilities she could train with at her gym, but that's also not steering her away.” 
On her personal blog, Beck published an all-inclusive guide on how to compete in Nationals, as it's still an evolving sport in its infancy; the inherent lack of information can lead to uncertainties for new adaptive athletes (like when Winstel thought she didn’t qualify but did). Winstel shares the same drive to improve access to information and resources, she hopes her appearance in Nationals will compel others with disabilities to try out a session at the gym, even if the goal isn’t to be a competitive athlete.

While Winstel and Beck don’t compete in the same category, they climbed side-by-side in the 2021 Nationals and have participated in various adaptive climbing events together. Winstel says jokingly, “If you want coverage on the livestream, don't climb next to Mo Beck.”

Beck has competed in every Paraclimbing National competition since its inception in 2014. She is a one-handed climber who was the 2019 National Geographic Adventurer of the Year and is a current USA Climbing Board Member.

In 2017 the International Paralympic Committee granted the IFSC the status of Recognized International Federation, which has led to standardizing competitions and creating categories for adaptive athletes to compete equally.

Winstel, who competes in the RP2 category, is heading to this year’s Nationals not only as a member of Team USA but also as a captain representing Catalyst Sports. Climbing was the flagship sport for the organization, which gives people with physical disabilities access to sports and an inclusive community. It has nine chapters in various parts of the U.S., and Winstel is a member of the Louisville Chapter.

After a year of hard work, surpassing every personal goal she set for herself, Winstel retains a healthy outlook on progress, aligning tangible goals like improving endurance with cultivating a loving relationship with her body. When she began competing she was climbing at a 5.10 level. Climbing routes are set on a scale measured from easy (5.1) to very difficult (5.15). Winstel quickly progressed to 5.11’s, she has also conquered outside routes and broke into the skill of lead climbing (when climber ascends and takes the rope up with them as opposed to tying into an already strung rope).

Her next major goal, after hopefully qualifying for the World Cup again, is to build a stronger foundation for access to outdoor climbing. Winstel says we are too close to Red River Gorge, one of the best areas for climbing in the country, for it not to be a place adaptive athletes can utilize. She wants to generate more information about accessible approaches that lead to any of the thousands of climbing routes in Red River Gorge.

“Nature is inherently inaccessible,” she says. “No one is asking to pave over nature, just the access to information about what's accessible and what's not in reality terms allows us, as disabled climbers, to get creative. We are used to navigating an inaccessible world. So let us say what we can and can't do, don’t just decide for us. And by putting out information about the reality of access levels, we can lower those barriers.”