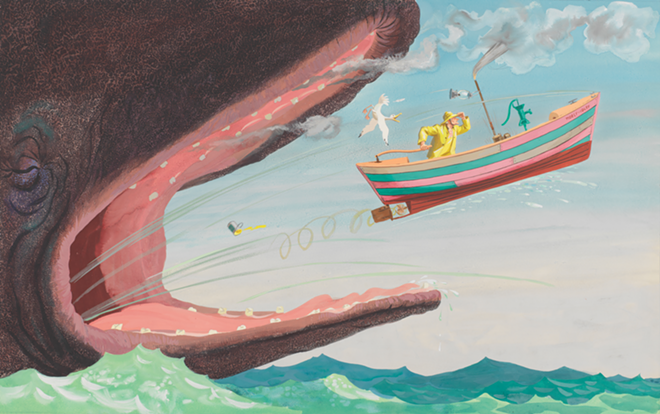 The Cincinnati Art Museum’s Emily Holtrop pauses as she searches for the perfect words to sum up the books of Robert McCloskey, the late Hamilton, Ohio-born author/illustrator best known for taking young readers blueberry picking in Maine and on a delightful walk with ducklings, starting some 70 years ago.

“They feel just kind of… sweet and warm,” says Holtrop, the museum’s director of learning and interpretation. “They’re a hug!”

Now she’s bringing to town an exhibition that returns the affection.

Make Way for Ducklings: The Art of Robert McCloskey, organized by the Eric Carle Museum of Picture Book Art in Amherst, Mass., opens Friday (July 20). More than 100 pieces, including preliminary book sketches, private paintings and photographs of McCloskey with his daughters have been assembled for a thoughtful, nostalgic study of an artist who shied away from attention himself but depicted everything around him with careful detail.

McCloskey drew mallards that looked like mallards, not anthropomorphic cartoons. As he worked on what would become his most famous book, he even purchased 16 ducks and kept them in his Greenwich Village apartment so he could watch them waddle and swim. “He was very passionate about taking time to see. Not just look, but really see,” Holtrop says.

McCloskey died in 2003 at age 88. The author of only eight books, he was the first two-time winner of the Caldecott Medal for children’s illustrators. He received the first for his warm sepia drawings in 1941’s Make Way for Ducklings, the beloved story of a feathered family that stops traffic on the way to Boston’s Public Garden. The second recognized Time of Wonder (1957), in which dreamy watercolors depict the beauty of his adopted state of Maine. Additionally, he won the runner-up Caldecott Honor three times, for Blueberries for Sal (1948), One Morning in Maine (1952) and Journey Cake, Ho! (1953), written by Ruth Sawyer, his mother-in-law.

Honors were nothing new to McCloskey. He attended Boston’s Vesper George School of Art on a scholarship, and at age 19 he was commissioned to design the bas-relief carvings on Hamilton’s new municipal building. Yet he never thought he was going to be an award-winning children’s book illustrator, Holtrop says.

As a young man in Hamilton, McCloskey made wood engravings to illustrate high school publications, taught a soap carving class to YMCA campers, and spent two summers crafting a totem pole from a 500-pound cedar beam. His first book, Lentil (1940), is kind of a love letter to his hometown. Its pages even include a veterans’ memorial that looks a lot like the Soldiers, Sailors and Pioneers Monument in Hamilton’s downtown. But the partly autobiographical tale about a harmonica-playing boy who saves the day in fictional Alto, Ohio, came about only after May Massee, the first children’s editor at Viking Press, advised the art student to forget his classical paintings of “limpid pools and Pegasuses” and return home and draw what he knew.

Today, a bronze sculpture of Lentil stands outside Hamilton’s Heritage Hall. Inside, fans will find the one-room Robert McCloskey Museum, where newspaper articles and early sketches reference an all-American upbringing filled with band performances, swimming and other wholesome pursuits.

“He started his career at a real sweet spot of Americans telling American stories,” Holtrop says.

Children’s literature had been filled with Mother Goose nursery rhymes and fairy tales, Aesop’s fables and British offerings such as Winnie-the-Pooh.

McCloskey’s One Morning in Maine, featuring his daughters Sal and Jane, is about clam digging, a loose tooth and boating into town to get ice cream. He elevates the everyday narrative with crisp black-and-white drawings that could be frames from old home movies.

These memories are colorized in Time of Wonder and paintings that McCloskey did for pleasure around his home in Deer Isle, Maine. He softens and shifts the focus from faces to places, depicting dock life, cottages, seascapes and endless summer days in watercolors that are reminiscent of the Regionalism and Realism of Thomas Hart Benton and Edward Hopper.

McCloskey didn’t talk about artists he admired, but Holtrop says he wasn’t a fan of Abstract Expressionism and took a humorous poke at Jackson Pollock in his final book, Burt Dow: Deep-Water Man (1963). When fisherman Burt is swallowed by a whale, he escapes by splashing paint against the beast’s innards to induce a belch.

A reclusive McCloskey illustrated a few more books by Keith Robertson up to 1970, continued to paint for himself and experimented with making puppets, but Holtrop believes that by the mid-1960s, he no longer saw a spot on children’s shelves for his quiet stories about the security found in family and small towns. The same year that McCloskey published Burt Dow, Maurice Sendak introduced the scary world of Where the Wild Things Are, and kids responded.

Yet in the 21st century, who doesn’t crave a hug?

Make Way for Ducklings is on view Friday (July 20) through Sept. 9 at the Cincinnati Art Museum. More info: cincinnatiartmuseum.org.