When Sarah Vanderlip — winner of Cincinnati Art Museum’s first Marjorie Schiele Prize — arrives here for the Sept. 29 opening of her show, it will be an Ohio homecoming, a full circle of sorts, for the California artist. 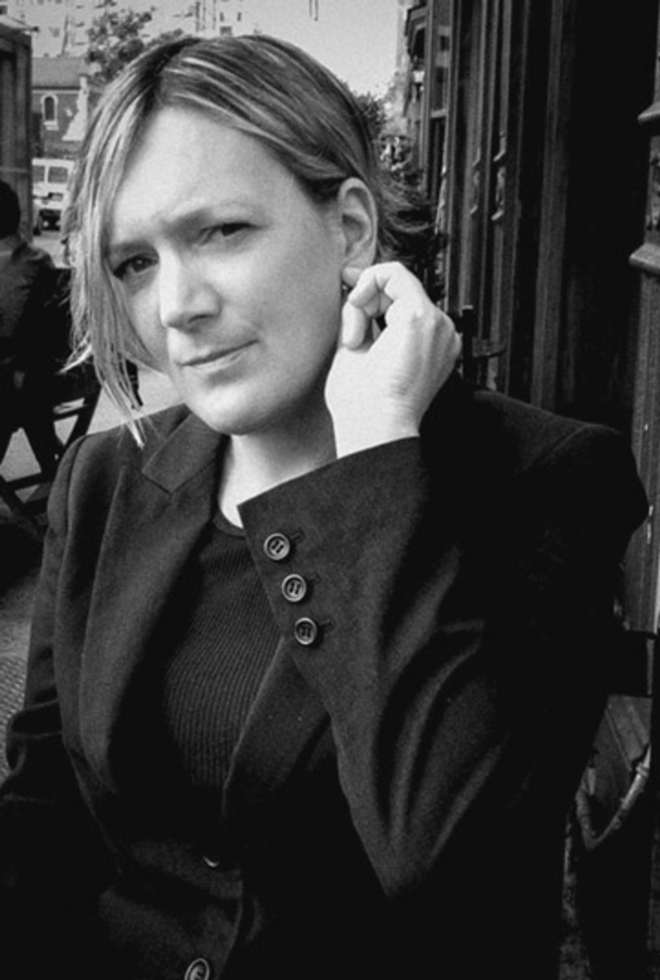 When Sarah Vanderlip — winner of Cincinnati Art Museum’s first Marjorie Schiele Prize — arrives here for the Sept. 29 opening of her show, it will be an Ohio homecoming, a full circle of sorts, for the California artist.

Schiele, a Cincinnati native and artist who died in 2008, bequeathed much of her estate to the art museum to start a triennial competition for emerging artists working in painting and sculpture. Vanderlip receives a $25,000 cash prize in addition to her show Drawings for Sculptures of Buildings. It is a tribute to her late father, who was Ohio-raised and -educated.

Large in scale, as big as 13-by-7-feet, the five graphite drawings on display are collaged with reflective silver Mylar material to give them a multi-dimensional feel that encourages reflection — literally and figuratively.

Her parents, Jay and Dianne, were from Toledo, where they met in high school and went to Ohio University together as the first generation of their families to attend college. They moved together to New York in 1963 and got married in 1964. After graduation, they moved to Philadelphia and Denver in 1977, he pursuing a career in architecture and she as a gallerist and museum curator. He died in 1994, after they had gotten divorced, leaving behind architectural drawings from his long career. She retired in 2007 after a 29-year career at Denver Art Museum.

Their daughter graduated with an MFA in sculpture from Yale University’s School of Art in 1991. After spending nearly a decade in New York, she and her husband moved to Los Angeles in 2000 upon receiving a job teaching sculpture at UCLA. She now teaches at California State University, Bakersfield while living and making art in Los Angeles.

Vanderlip attracted much attention in 2004 for creating “truckheads” — inspired by the shiny silver metal caps from oil tankers — and placing them in the California desert. After that, she and her mother went to a Kiki Smith exhibit in New York, where in an accompanying catalog Smith talked about the influence the work of her own father — sculptor Tony Smith — had upon her. Vanderlip was so attracted to the shape of one of Tony Smith’s abstract pieces that she decided to draw it and put silvered material over it.

“Then I thought, ‘What am I doing drawing her father’s work when I could be drawing mine?’ ” said Vanderlip, 47, during a telephone interview. “I realized I had files upon files of his beautiful original drawings through his entire 40-year career as an architect. And it was just this ‘eureka’ moment. That was in 2006, and 56 pieces later I still get goosebumps. I still want to make these. That’s how it all came about and I’m grateful the museum is now giving me this chance to see what I can do with it.”

Her process involves using her father’s original renderings as reference for her own drawings in graphite on paper. She then adheres pieces of silvered Mylar to the paper around and between the graphite lines, which must remain visible.

“I leave the glue lines on, fingerprints, the places where a line has messed up,” she explained. “I want them to have this humanity. I want them to read as handmade things. I’m not trying to screw them up, but they’re not about exactitude.”

For this first Schiele Prize, the museum issued a call for entries and received some 350. The jurors who selected Vanderlip were Claudia Gould, director of New York’s Jewish Museum; Max Hollein, director of Frankfurt’s Stadel Museums; and Cincinnati Art Museum Director Aaron Betsky.

Vanderlip’s work isn’t sculptural in the traditional sense. “While the Schiele Prize is devoted to sculpture and painting, we as art professionals have to recognize that some of the best younger artists today embrace an open field of art-making that’s not so rigid in its parameters,” said James Crump, the art museum’s chief curator.

For her part, Vanderlip regards her work as preparatory studies for sculpture, and has done preliminary work on several models.

“Being the kind of artist I am, a conceptual artist, I always start with the idea,” she explained. “The materials come after the idea and are what’s best to illuminate that idea.”

Vanderlip’s Drawings for Sculptures of Buildings is on display at Cincinnati Art Museum Sept. 29-Dec. 9. (Visit cincinnatiartmuseum.org for details.)