The museum's largest American Folk Art exhibition in its history contains more than 100 pieces created between 1800 and 1925. 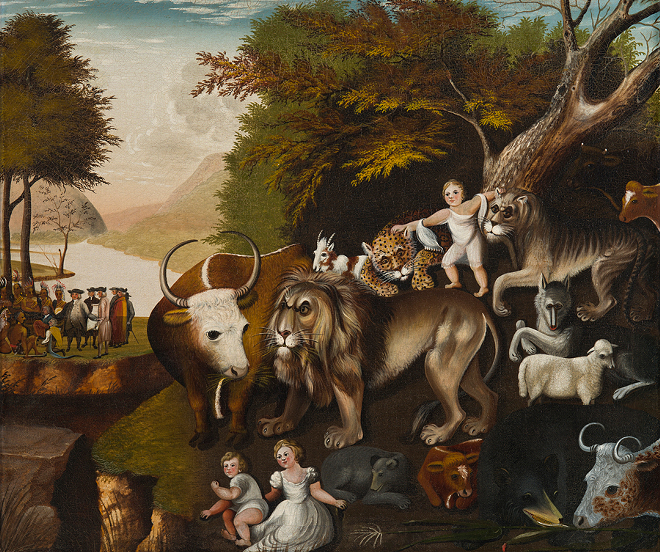 Photo: Courtesy of the Barbara L. Gordon Collection
“The Peaceable Kingdom with the Leopard of Serenity,” attributed to Edward Hicks
What defines Folk Art? Julie Aronson smiles at the question. The Cincinnati Art Museum’s curator of American paintings, sculpture and drawings recognizes that there is no absolute answer.

“You know it when you see it,” she says.

The work is so rooted in personal and cultural identity — it’s made by us, for us.

The museum this Saturday will open the largest American Folk Art exhibition in its history and its first dedicated solely to the genre since 1990. A Shared Legacy: Folk Art in America, up through Sept. 3, comprises more than 100 pieces created between 1800 and 1925.

About 60 items — paintings, furniture, sculpture, trade signs and illustrated family documents known as fraktur — are from the collection of Barbara L. Gordon, a D.C.-area resident and trustee of the American Folk Art Museum in New York, where the exhibit debuted in 2014. To represent more Ohio artists and women, Aronson and Amy Dehan, the Cincinnati museum’s curator of decorative arts and design, included loans from regional collectors and added quilts, samplers and ceramics.

Folk Art is a fluid term, Aronson says. The organizers of the exhibit apply the label to artists who were self-taught, had minimal training or were participating in art forms passed down through a community.

“Much of the work is made by and for the middle class, rather than the upper class you might see in works by (British artist Thomas) Gainsborough,” Aronson says.

The show reflects the diversity and change in America during the 19th century as the young nation built cities and farmed the land.

“Girl of the Period,” a shapely wooden figure holding a cigar, would have stood outside a tobacconist’s shop, serving as an advertising symbol and even an early feminist icon. The defiant woman strikes a pose similar to the working-class “Smoking Boys” painted by Frank Duveneck, the Covington-born fine artist whose work hangs in the museum’s Cincinnati Wing. She could ask one of Duveneck’s boys for a light, but this well-dressed lady, thought to be created by the workshop of New York carver Samuel Robb, already has a stylish male counterpart called “Dude.”

Details found on pieces of German-American-painted furniture reflect that group’s own social aspirations and assimilation into the nation’s melting pot. Dehan points out a heavy chest of drawers from 1803 Pennsylvania that is personalized with hearts and tulips. Then she turns to a bright orange painted chest from the 1820s featuring similar adornment but lighter construction and flared “French” feet typical of English furniture.

“I love the idea that these big chests were part of the German heritage, and that they were built to last and were beautifully decorated and intended to be passed down through a family,” Dehan says. “It was a way of carrying on a legacy.”

But high-style pieces also influenced rural craftsmen as they began to interact with other cultures in America. Some cabinetmakers practiced faux graining — painting furniture made from less expensive lumber in order to mimic woods popular with the urban upper class.

These Folk artists were creating for themselves and their communities. They were ordinary people with an extraordinary love of country, family and home. So for a Folk piece to be included in a museum collection, in addition to well-executed technique, it has to have a degree of expressiveness, Aronson and Dehan say.

“It sounds really simplistic, but a lot of these pieces, you just look at them, and it brings a smile across your face,” Dehan says, just flipping through the exhibit’s catalog to a photo of two charming plaster cats sporting black-and-white coats and red collars.

Additional smiles are to be found in a companion exhibit up through Sept. 17, American Folk Art Watercolors and Drawings, made up of works from the museum’s permanent collection. Mary Bruce Sharon, who didn’t begin to paint until age 71, celebrated her Covington childhood in the 1952 watercolor “Grandpa’s Bridge.” Henry Bruce Jr. was instrumental in bringing John A. Roebling here to build a span across the Ohio River. Sharon’s depiction of her relatives crossing the Suspension Bridge for the first time is naïve in style yet heartfelt.

Highlights among the paintings in A Shared Legacy are a tender portrait of a boy by Ammi Phillips, who also has work in the American Folk Art Museum’s collection; a version of “The Peaceable Kingdom” by the prolific Edward Hicks, who was a Quaker minister; and an 1850s portrait by New York artist John Bradley of Thomas French, with a vignette of a dairy farm in the background. French was a founder of Cincinnati’s French-Bauer Dairy, which was one of the city’s favorite ice cream vendors until the company was sold to Meyer Dairy in 1979.

Folk Art was the dominant art style in America for more than a century. Though the cutoff year for A Shared Legacy is 1925, that date is arbitrary, the curators say.

“It had tremendous appeal to the Modernists in the early 20th century who were looking at ways of breaking away from the academic tradition, because there is something that’s different about it,” Aronson says.

Today’s Folk artists sometimes are called outsider artists, a term also open to multiple interpretations. In the museum’s permanent Folk Art gallery, Dehan and Aronson have added contemporary examples from self-taught artists who simply felt compelled to express themselves, including the late African-American painter Mose Tolliver, who would use any available surface.

Cincinnati’s Folk Art collectors know their next great find could be at a flea market, Aronson and Dehan say. That’s how Barbara Gordon got started.

Dehan says Folk Art is special because it’s relatable, even for children.

“You don’t have to have this prior bank of knowledge that you build up about 18th-century English paintings,” she says.  “You can just come in.”