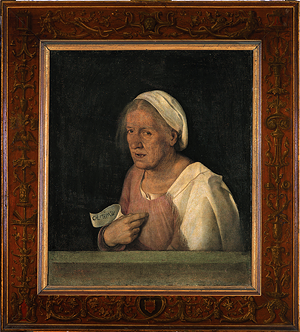 An old woman's eyes shift right, staring outward; she points at herself while holding a small banner that reads "Col Tempo" (or "with time"). Dressed in a fading pink blouse, her mouth is agape as though she's about to speak; gray strands of hair frame her face. She's the focus of Renaissance painter Giorgione's La Vecchia. And now you can pay her a visit.

The Cincinnati Art Museum will have the painting — which is over 500 years old — on view from Feb. 15 through May 5 of this year. The stint marks the first time a Giorgione painting has been on display in Cincinnati. The classic painting — still in its original oak frame — just underwent a major conservation treatment.

According to a description on CAM's website, Giorgione created the portrait as an "allegory of time and morality." In an era where luxury and beauty were often at the forefront of art, the woman depicted contrasts that. She is aged and poor, but she represents the truth and reality of how many lived — and looked.

"La Vecchia embodies the power and complexity of the art of painting at one of its most experimental moments," says Peter Jonathan Bell, a CAM associate curator, in a press release.

According to the release, the painting is on loan to the museum from the Gallerie dell'Accademia in Venice, Italy. Following its showcase at the CAM, the painting will be shown at the Wadsworth Atheneum Museum of Art in Hartford, Connecticut. The Foundation for Italian Art and Culture has helped facilitate its loan.

The artist, whose full name is Giorgio da Castelfranco, painted the work between 1508-1510. His career was short;  Giorgione died at age 32 or 33 from the plague. Despite his influence, there are only six pieces attributed to his name, his most famous being The Tempest.

Giorgione’s La Vecchia will be on view in the Sara M. and Michelle Vance Waddell Gallery, across from the museum’s Terrace Café. Admission is free. More info: cincinnatiartmuseum.org. This story has been updated.