The 50-foot mural of oranges was inspired by Jason Yacoub Khaled Al Ghussein's family’s orange groves in the Palestinian countryside. 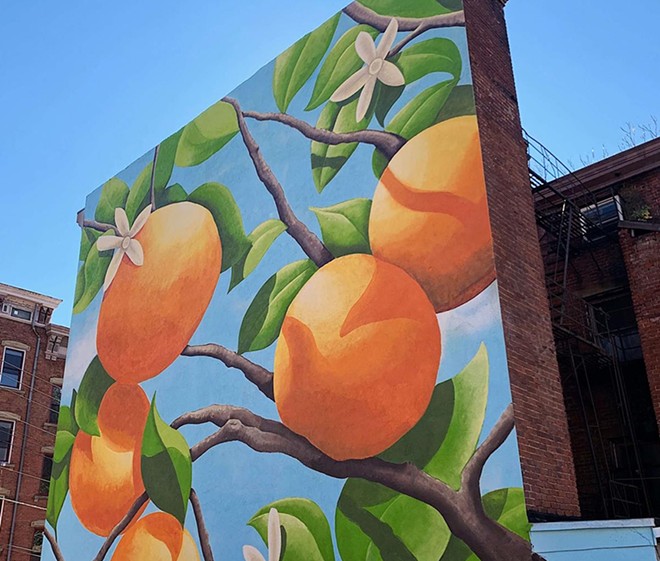 Photo: Provided by the Institute for Middle East Understanding
The 'Welcome to Jaffa' mural in Over-the-Rhine.

Over-the-Rhine is brighter than ever, thanks to a 50-foot mural of oranges on East Clifton Avenue.

But these are no ordinary oranges — they’re Jaffa oranges, and they’re a symbol of Palestinian identity.

“There's a lot of history and meaning and significance to the Palestinian community, “ says Palestinian artist Jason Yacoub Khaled Al Ghussein. “We all know what Jaffa oranges are and what they mean to us in our kind of individual history.”

When Al Ghussein dreamt up this project, titled Welcome to Jaffa, he was thinking specifically of his family’s orange groves in the Palestinian countryside of Wadi Hunein. Wadi Hunein depopulated during the Arab-Israeli War of 1948. Al Ghussein’s father, Khaled, was a refugee.

After his father passed on Al Ghussein’s 21st birthday, Al Ghussein felt inspired to learn more about his father’s upbringing. Khaled was born into a politically influential Palestinian family. His father, Al Ghussein’s grandfather, was Yaqub al-Ghussein, a Palestinian leader and landowner who was exiled by the British government during the Arab revolt of 1936.

Amidst all of life’s complexities, the simplicity of the family’s oranges remained.

“I remembered the tales that my father, Khaled, would tell me about his childhood and the orange groves in Palestine that my family owned before the Nakba,” Al Ghussein writes on his website. “My father would tell me of the sweet scent of the orange blossoms wafting through their countryside home.”

Now a vivid image of these oranges stands in Cincinnati as a tall reminder of Palestinian history. And while the average passerby might not know the story, the symbol of the Jaffa orange speaks clearly to fellow Palestinians.

“A lot of other Palestinian people have reached out to me and said how much that they enjoy the mural and how much it means to them,” Al Ghussein tells CityBeat.

Al Ghussein had applied to be a part of this year’s BLINK festival, but his application wasn’t accepted. That, however, is not stopping him from illuminating his mural. Al Ghussein is independently sourcing the funding to light up Welcome to Jaffa during BLINK weekend, from Oct. 13-16. He sees it as an opportunity to bring attention to the history of Palestine and Palestinian people.

“I come from kind of the more privileged side of this whole equation. And with that, I feel an element of obligation to advocate for the people back home and what they’re going through,” Al Ghussein says. “Those people deserve to have their voice heard, and my goal with my artwork and this rogue exhibition is just to help other people hear their voices.”

Al Ghussein also hopes that the mural can help alert people to the global conversation about Palestine.

“Reputable organizations like Human Rights Watch and Amnesty International have all come out and formally labeled Israel as an apartheid state,” Al Ghussein says.

Al Ghussein describes his mural as being “at the intersection of art, culture, history and conflict.” It has added beauty to a building that was drab and gray before it. And with his BLINK-adjacent illumination, he hopes that Welcome to Jaffa will help bring Palestinian voices to the streets of Cincinnati.

The mural is located on East Clifton Avenue near Frintz Street. For more information, visit welcometojaffa.com.