"Humans Unwrapped: An Interactive Exhibit Celebrating Art of the Nude Figure" reveals all on Oct. 1. 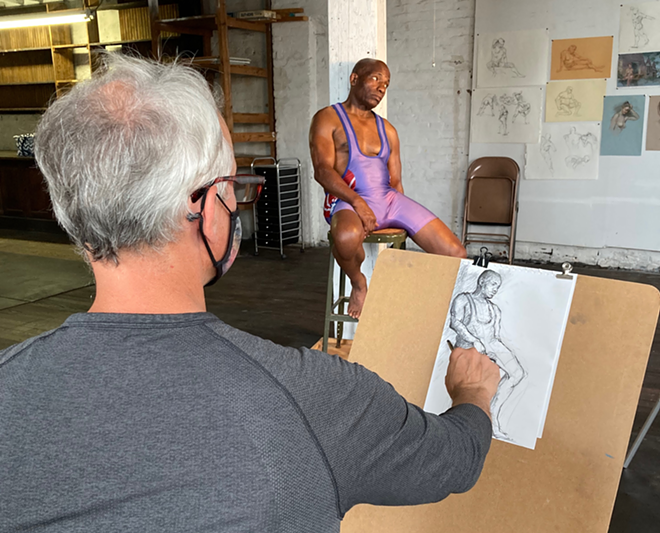 The nude form has been a professional and cultural touchstone for artists for centuries, but these days, newer artists don’t always have the opportunity to closely study the human body.

A recent drawing series changed that, and the result is a new exhibit that features artists of every level and nude drawings in unexpected settings.

On Friday, Oct. 1, Caza Sikes art gallery in Oakley opens Humans Unwrapped: An Interactive Exhibit Celebrating Art of the Nude Figure. It is the culmination of four in-person drawing sessions that took place during September. Each session was led by a Cincinnati-based master artist who guided a small group of participating artists through a two-hour figure drawing session of a nude model. Artwork from these sessions will be on display until Oct. 6.

Caza Sikes — which is owned and operated by Reid Sikes and his sons Evan, Will and Graydon Sikes — collaborated with Cincinnati fine artist Jan Brown Checco to ideate and organize the exhibit. Recently, Brown Checco was downsizing her art collection and working with the Sikes family to auction out pieces through the gallery. As they combed through the artwork, Evan Sikes noticed that Brown Checco had hundreds of drawings and paintings of nude figures that she had created.

“The nude sort of comes in and out of fashion. Right now, it’s a little controversial because people are not looking to see nude figurative art in galleries,” Brown Checco tells CityBeat.

“It’s sort of like rescuing the nude figure from being naked and pornographic and drawing it back into the fine art and culture realm.”

Together, they hatched the idea to hold sessions for professional artists, emerging artists and art enthusiasts to do exactly that. Will Sikes says he views it “as a way to collaboratively pull some artists together and also as a way to celebrate the figural form and do something a little provocative and fun.”

Brown Checco connected with professional Cincinnati artists and frequent collaborators Ellina Chetverikova, David Mueller, Marlene Steele and Brad Davis to create their own renderings of a nude figure and to each lead an in-person drawing session in September. They introduced skills and concepts, demonstrated how to pose a model and observed participants’ creative processes to offer one-on-one guidance.

“Figure drawing is not an easy thing to do,” Brown Checco says. “That’s why I chose the people that I did. Because to know the figure and to be excellent at rendering the figure is really part of a skill set of the highest-level artists.”

Participants in the sessions ranged from novices to experts. All skill levels were welcome to register. Will Sikes says this is part of what makes Humans Unwrapped so special: “For these guests, they have access to a live figural model, which they might not always have, and then we’re going to select some works from the students to feature in the gallery space. So, it may be their very first opportunity to have a piece hanging in the gallery.”

“A lot of these folks have never done a painting, so we’re exposing them to a master teacher, and maybe we’ll spur interest in people to pursue the fine arts,” says Reid Sikes. “My two friends who are doing the last one have no art experience. They belong to art clubs, they’re art appreciators, but they’re not makers. So, that kind of excites me.”

Sessions took place at private residences throughout Cincinnati. Brown Checco notes how unintentionally comical those phone calls seemed (“We want to place a nude model in your yard, how do you feel about that?”), but the people they approached were intrigued by the idea. The sessions also took place outdoors where artists were at the whims of natural elements. It’s a far cry from the controlled lighting, even temperatures and closed atmosphere of an indoor studio, which is where figure drawing commonly takes place. Yet while the outdoors poses challenges, it also makes room for a traditional artistic experience.

“If we take a look back at the tradition of nude figures, especially in the 19th century and early 20th century, more often than not, they’re outside. They’re in gardens,” says Brown Checco. “There’s nothing more natural, in fact, than a nude figure in a nude setting.” 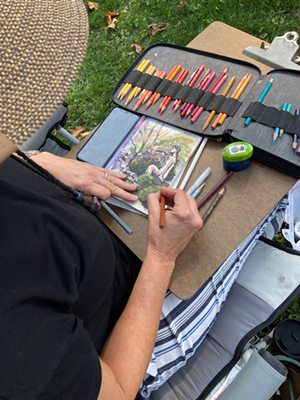 Lura Bentley, the figure model for the session held on Sept. 11, says the experience of posing nude outdoors was rather meditative. She sat on the stone ledge of the porch, framed by vibrant greenery and awash in sunlight that filtered through trees along the property. Above her, a large tree stretched higher than the house, dropping leaves lightly over the scene whenever the wind blew. Before her, nine artists rendered her figure from different angles and with different media — ink, graphite, oil paint, pastel pencil and even homemade walnut ink. She alternated 20-minute sitting sessions with five-minute breaks over the course of the session.

Bentley tells CityBeat the journey of these sessions is really interesting. “I always try to keep note of the beginning of the session and the end of the session. For those first 20 minutes, I think about everything, and it’s just thoughts coming in and out — what I ate for breakfast, what song is stuck in my head, just all sorts of things. But when we get to the final one, it’s very peaceful. I’m not thinking about much... It becomes really quiet, which is very fascinating to me, especially in my own journey of mindfulness and meditation.”

Bentley recently graduated from the Art Academy of Cincinnati where she studied sculpture, art history and creative writing. She says figure modeling is beneficial to her own practice, and it teaches her to be more respectful of still life and nature. She models regularly at Manifest Gallery, where master artist Davis teaches drawing sessions.

“If you’ve ever tried to sit still and breathe for just five minutes, it’s impossible. Twenty minutes, it’s unbearable. So, I’m eternally grateful to anybody that models for us,” Davis tells CityBeat.

Davis also teaches at the University of Cincinnati and the Art Academy of Cincinnati. He led the Humans Unwrapped session on Sept. 11, working on his own rendering of Bentley with pencil.

At the beginning of his session, Davis provided a brief lesson on composition and value shapes. He referenced an 1889 painting titled “Reflexer” by Anders Zorn, an artist he admires. The artwork depicts a woman wading into a calm body of water with greenery in the foreground and a serene landscape in the background.

“You always have to keep in mind that you’re doing a whole scene. It’s not just figure drawing,” says Davis when describing the lesson. “I wanted to introduce this from a perspective of value shapes and how the figure can be embedded in the environment, not separate from it.“

Davis views Humans Unwrapped as a way to connect curious art enthusiasts to a community that already exists. “There’s a community of us that does this, and it can be the starting point for some people to get into the community.”

Emily Maneval, a student at the Art Academy of Cincinnati, saw an opportunity to revisit her foundational artistic skills by attending the session. She’s studying illustration and works primarily on the computer, so figure drawing in nature was a welcome departure from her regular work. She worked from a straight-on angle of Bentley, seated in the grass with music streaming through her headphones. She says the experience was really peaceful and it’s inspired her to keep returning to traditional artwork.

When asked if the prospect of drawing a nude figure elicited any discomfort, Maneval said no. “I always think about that Titanic scene — I feel like that really ruined people’s perception of what figure drawing is. It’s just a nude form. There’s nothing remotely weird and uncomfortable about it.”