In "Met the End," the author weaves together true-crime history and personal healing. 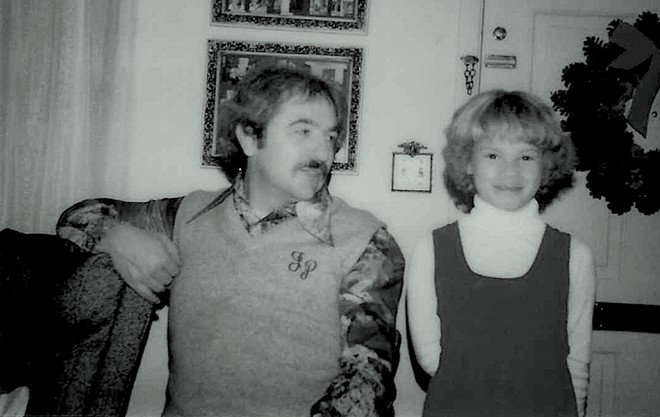 Holly Brians Ragusa heads to a bakery on an overcast, chilly afternoon to discuss her recently-released debut novel, Met the End, which she describes as a true crime survival memoir. Before taking a seat, she sees a few people she knows and pauses to embrace a friend. An Over-the-Rhine local who grew up on the West Side, Brians Ragusa’s Cincinnati roots run deep.

Published in November 2022, Met the End is a vulnerable text that threads together personal, local and national history through the story of Brians Ragusa’s father, John Powell, who was murdered on March 7, 1987 by serial killer Donald Harvey.

“This is an emotional story,” Brians Ragusa tells CityBeat. “I went to comfortable topics first. Then, I reached out and got bolder in what I would acquire and what I would digest. But I didn’t outline this book, I wrote it. And I gave an enormous structural change, probably two and a half years into the process. And stayed there and built on it.”

Powell’s death led to the end of Harvey’s 17-year killing spree and his eventual prosecution when a coroner smelled cyanide during Powell’s autopsy. The revelation set a larger investigation in motion, aided by journalists, hospital whistleblowers and detectives. Harvey, a former nurse’s aide, ultimately pleaded guilty to murdering 37 people and was sentenced to multiple life terms for killings in Ohio and Kentucky in 1987.

According to Brians Ragusa, there were other deaths that attorneys didn’t have enough evidence to prosecute; it’s estimated that Harvey killed upward of 87 people. Most of Harvey’s victims were patients at regional hospitals and medical centers, including Powell. In July 1986, Powell was found unresponsive on Exit 13 near I-75 following a motorcycle accident. He spent months in critical condition at the University Hospital’s ICU and was later taken to Drake Memorial Hospital to recover. The latter is where Harvey worked.

“He was referred to as the miracle patient at Drake, and the hope that had blossomed in us was crushed under the foot of this killer,” Brians Ragusa tells
CityBeat. “That we can find some ray of light from it is very important to me. That we can see some good come from all of this is how I move through life: searching for the good. I needed to tell that piece. He suffered, he endured and he lost a battle with a killer we didn’t even know existed.”

Met the End portrays Powell as a loving father to three children, and the memoir touches on Brians Ragusa’s blended family. Her mother, Patricia, married John. Both brought children from past relationships: along with Brians Ragusa, there’s Heather and “Little” John, the youngest.

On page 89, Brians Ragusa points to another piece often missing in the telling of the tragedy: Powell was recovering from the injuries he sustained from the motorcycle accident. Still, Harvey has been the subject of several documentaries, true crime podcast episodes, news stories, books and other media.

“I’m hoping that this story shines the light on survivors and asks people to ask more of themselves when they enter into the greater world and true crime,” Brians Ragusa says. “I’m hoping that it asks more of our systems of truth and justice and that it reminds people that there’s a human on the other side of entertainment.”

The Hamilton County coroner’s office and Cincinnati Police Department may have traced Powell’s murder to Harvey after detecting poison during his autopsy, but it was investigative reporting by WCPO-TV’s Pat Minarcin – aided by several Drake Hospital whistleblowers – that led to Harvey being found as a serial killer.

The minute Brians Ragusa heard the news, she started writing, she says. In the five years she spent with the manuscript, Brians Ragusa took several mental health breaks. Different things named Harvey made headlines that brought back her focus. From Hurricane Harvey to Harvey Weinstein, the name kept reappearing.

“Call it coincidence, if you will. You know, the minute someone points out a new car, that’s the only car you see then for a while,” Brians Ragusa says. “You can call it that, but certainly, for me, there were many reminders to call me back to the path of writing this. It didn’t start off that I went in like, ‘Oh, I’ll be healed by the writing process.’ But that is certainly what transpired and I have really taken that piece to heart.”

In the process of writing Met the End, Brians Ragusa interviewed Minarcin along with other key figures in the case like Joe Deters, who led the investigation as prosecutor, and Powell’s close friends, Joe and Fran Suesz. The memoir interweaves personal letters, news clippings, photos, Brians Ragusa’s teenage diary entries, police statements and Powell’s bedside journals, where friends and family wrote to him in recovery.

“Being a packrat has its advantages,” Brians Ragusa says. “I would say that I’ve always been a documentarian. Whether it was keeping calendars, diaries or journals, I have always documented things. That’s how I process. I enjoy remembering just in general.”

Brians Ragusa’s interest in historical research is clear in Met the End, which is just as much about her investigating her father’s death and how it affected her family as it is about Cincinnati. The text is entrenched in historical context, with Brians Ragusa often unpacking the story behind any given place or neighborhood mentioned.

Through her mother, Brians Ragusa gained access to their home archives and sorted through countless journals, photos and documents. Patricia now lives with Brians Ragusa and her husband, Damon. Brians Ragusa refers to her mom as a heroine.

“It held a place that I always knew would come to,” Brians Ragusa says. “I had talked to my mom about writing this book for years, so every time we would come across a new artifact, if you will, it would just generate more interest in me. And I think it just all came to a head in late March of 2017 when Harvey was beaten.”

In the aftermath of Powell’s murder, Brians Ragusa’s mother sent her to a psychiatric care facility for adolescents. In Met the End, she writes a disclaimer about that time on page 173: “I’m sharing this process, this part of my healing, not as a professional, but as always, in the hope that any part of my story could help others.”

The biggest thing Brians Ragusa says she gives her younger self is empathy, looking at her past self through the lens of compassion. In sorting through old journals, she says she certainly doesn’t think, or write, the same way.

“Mental wellness, above all, is one that I’m very closely tied to and I strongly believe that in talking and writing, there is healing,” Brians Ragusa says. “And obviously, I wrote when I needed it, and it helped me through. And that was my journey.”

Brians Ragusa is aware of the myriad paths people take in coping, but she says she encourages people to dig a little deeper because in doing so, they might find healing outside of shame and guilt. In the memoir, Brians Ragusa nods to Parents of Murdered Children, a local organization that helped her family heal from the tragedy.

“To all the Harvey survivors out there, I hope you are well and have found your peace,” writes Brians Ragusa in the memoir’s acknowledgments. “POMC— keep up the hard and important work.”

A poet and opinion contributor to the Cincinnati Enquirer, Brians Ragusa also teaches workshops. Her other published works include last year’s Dying to Know Myself in Time and poetry books Inverse and Tilt a World, both of which will be released in 2023. Having other projects to pour into helped Brians Ragusa through penning Met the End.

“Having something else to look to occasionally, and even during the process of publishing this, because as one might imagine, when you’re waiting that anticipation is wonderful, but it’s also staggering. And it was helpful to have other things to pour myself into,” Brians Ragusa says.

Met the End was self-published because going through traditional publishing felt limiting, Brians Ragusa says. It’s a story she wrote on her own terms.

Learn more about Holly Brians Ragusa’s Met the End as well as author events at hbragusa.com.