But we've overcome the odds before, right? 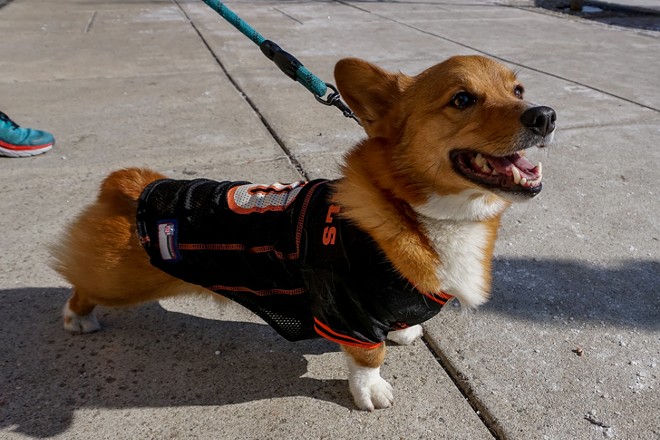 Photo: Adam Doty
Even this dog knows not to count the Cincinnati Bengals out.

Analysts aren't giving the Cincinnati Bengals the best odds for the Super Bowl, but this team is used to defying the odds, right?

Betting sites overwhelmingly predict that the Los Angeles Rams will be the victors during Super Bowl LVI later this month.

Just after the AFC and NFC championship games, The Lines said that most legal sportsbooks had set the over/under at 49.5 points, with the Rams to win it all with a four-point spread on Feb. 13.

Likewise, ESPN puts the Rams over the Bengals by 3.5 with an over/under at 50.5 points. Sports Illustrated arrives at the same conclusion.

But it's far from impossible that the Bengals will prevail. After all, this team overcame predictions from last February of 75 to 1 that they would even make it to the Super Bowl LVI — good for last place with four other teams.

The Kansas City Chiefs were the favorite to win this year's Super Bowl, but the Bengals killed their dream Sunday.

"Only two teams — the Houston Texans and Detroit Lions — had longer preseason odds to win the Super Bowl than the Bengals, who opened the season at +15000. And Cincinnati was a 150-1 shot at BetMGM after a Week 2 loss to the Chicago Bears," a press release from The Lines says. "Yet Cincinnati knocked off the Las Vegas Raiders on Wild Card Weekend and ousted top-seeded Tennessee in the Divisional round. Burrow and the Bengals then went to Kansas City and shocked the 7.5-point-favorite Chiefs on Sunday to record the franchise's first Super Bowl appearance since the 1988 season."

The Cincinnati Bengals will take on the Los Angeles Rams during Super Bowl LVI on Sunday, Feb. 13. NBC will broadcast the game, and fans also can watch on Peacock, Telemundo, NBCSports.com and the NBC Sports app.

During the AFC Championship game on Jan. 30, the Bengals — 10-7 on the regular season — toppled the much-favored, two-time AFC champion Chiefs — who went 12-5 — in a nail-biter and last-minute win. In overtime, rookie Evan McPherson gave Cincinnati yet another game-winning field goal — a 31-yard beauty that glided right through the posts and made the entire Queen City erupt with glee.