Cellist Sujari Britt and violinist Caroline Goulding — both alumnae of the popular NPR and PBS series "From the Top!" — head the outdoor fest focusing on women composers.

Cellist Sujari Britt and violinist Caroline Goulding, both alumnae of the popular NPR and PBS series From the Top!, head a roster of soloists that includes CCO principals.

Seating is limited in each venue, masks are optional and concerts are shortened with no intermission.

As of press time, several events are nearly sold out and CCO music director Eckart Preu isn’t surprised. Speaking on Zoom from his home in Spokane, Washington, Preu radiates anticipation for the season that reflects his responses to re-emerging from semi-isolation. The program lineup spotlights women as composers and performing artists as well as music’s therapeutic potential.

“We are coming out of this pandemic (as) changed people and we all need music therapy,” Preu says. “I asked myself, what is music that matters? What role can music play in healing?”

“Beethoven and Tchaikovsky were my prime suspects,” he adds. “Beethoven was the first to put himself in the center of his compositions, and Tchaikovsky especially worked through his mental turmoil through music.” 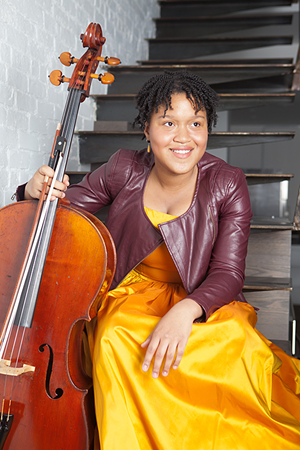 The mainstage concert on Aug. 6, “Mindful Music,” explores creative responses to mental challenges. It features Beethoven’s “Symphony No. 4,” written in the midst of devastating hearing loss, as well as Tchaikovsky’s “Variations on a Rococo Theme,” with cello phenom Britt. The concert opener is “Lyric for Strings” by George Walker, a prolific composer and the first Black musician to win the Pulitzer Prize for composition in 1996.

The theme of music as an outlet for emotional struggles continues on Aug. 8 with “Restorative Strings” at Coney Island’s Moonlite Pavilion. In addition to excerpts from chamber works by Smetana, Beethoven and Hummel, cellist Britt performs the world premiere of her composition “No One’s Driving,” and Preu will be the pianist for Nico Muhly’s “Allen & Lucien.”

Britt offered her piece to Preu, who was already planning to highlight women composers throughout the Summermusik season.

“She was totally unknown because she stopped composing when her daughter was born in 1926 and her husband threw out all her music after she died in 1946,” Preu says. “Her four surviving compositions were discovered by chance in a secondhand bookstore and a musicologist who arranged these scores offered me this piece.”

Preu adds that it is a “ beautiful work, extremely well-crafted.”

“After centuries of neglect, we have decades of discovery ahead of us and it’s exciting,” he says. “We need to perform this music, encourage publication and recordings so that there’s wider access.”

Women rule both as composers and performers for that Aug. 15 concert, titled “Her Voice.” In addition to Elkington, composers include University of Cincinnati College-Conservatory of Music alumna Jennifer Jolley, Reena Esmail, Elena Kats-Chernin, Shelley Washington and Gabriela Lena Frank.

Preu notes that the composers come from “very different backgrounds” and their musical languages are unique.

“Reena Esmail is Indian-American and her work incorporates Hindi music that has nothing in common with Western styles. Elena Kats-Chernin’s music is really edgy, but then she takes Bach’s music and combines it with her own language.”

“I like her language,” Preu says. “She’s very subtle and very inventive. ‘Starburst’ is short, small and extremely well-crafted, perfect as an opener and it’s already been widely performed.”

The final work is Mozart’s “Turkish” fifth violin concerto with violinist Goulding, who at 29 has performed with major orchestras and garnered a Grammy nomination.

Preu welcomes the opportunity to perform outdoors, noting that there will be some amplification for sound enhancement. Even more important is the special sense of community.

“The atmosphere is more casual, and your senses reach out more to take everything in, from the music to the surroundings, which really enhances that community feeling.”

Seating options range from pods of benches and low folding chairs at Seasongood Pavilion and the Cincinnati Zoo’s Wings of Wonder Theater to distanced folding chairs at other venues. Many of the Chamber Crawl events — like the tribute to The Beatles at Coney Island on Aug. 10 — are nearly full as of press time; the CCO even added seats to some shows.

And yes, music lovers can picnic. There will be food trucks at Seasongood Pavilion; beverages including red and white wine will be available. Bring your own cooler, but no outside alcoholic beverages are permitted. Beverages will be sold at Coney Island and Pyramid Hill.

There are rain dates for events in non-covered venues. Preu says the heat is less of a concern than rain.

“Even indoors, there’s a lot of heat from onstage lighting, so we’re used to that. And the musicians constantly adjust to each other like a living organism, whether it’s intonation, an entrance or dynamics, inside or outside,” he says.

Preu — also the music director for the Long Beach Symphony in California and the Portland Symphony in Maine — is excited about returning to Cincinnati and being on the podium. He’s also looking forward to accompanying many of the chamber works on piano.

“Playing (music) with your musicians deepens our relationship and helps us get to know each other better,” he says. “It’s also an opportunity for our audiences to see another side of me.”

Above all is the delight in performing for live audiences.

“Recordings are great but the emotional magic really happens when you’re with other people,” he says. “I’m really looking forward to it.”