Hammond is ready for his close-up. Blake Hammond heard the siren’s call of stand-up comedy not long after he learned the alphabet. As a somewhat sickly child, Hammond spent a fair amount of time at home with the television, and his go-to viewing preference in the late 1980s and early ’90s was The Comedy Channel (precursor to Comedy Central) — particularly the stand-up segments, but especially reruns of old Saturday Night Live episodes. By second grade, Hammond was being home-schooled in his future career.

“Norm MacDonald’s (‘Weekend Update’ segments on SNL) were the best,” Hammond says. “I remember repeating his O.J. (Simpson) jokes at school and they’d be like, ‘What? We’re 7, we don’t even know who O.J. is.’ And I’d say, ‘He was a football player. He killed people. These jokes are great!’”

Fast forward to right now: Hammond is preparing for the taping of his Amazon Prime comedy special, which will be a half-hour broadcast consisting of the best bits from two shows performed at MOTR Pub on Oct. 28. The special’s air date has yet to be determined.

Given his relatively low profile at the moment, Hammond has some flexibility in structuring his sets for the taping; he’s writing new material, but he also has plenty of audience-tested bits that haven’t had the kind of broad exposure that Amazon Prime will offer.

“I’m not going to do totally different sets, but if I can nail it down and get it the first time, I’ll probably do a bunch of different shit for the second one,” Hammond says. “They’ll edit stuff together and edit stuff out. I do crowd work sometimes and I always riff, and I usually say something that’s too fucked up so they’ll cut that out.” 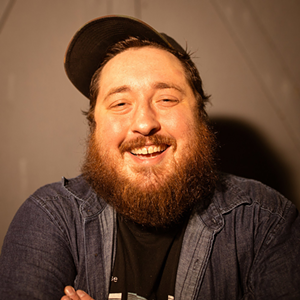 Hammond is a lifelong Cincinnatian; his parents lived just inside the Mariemont school district. He studied journalism at the University of Cincinnati and after graduation became a CityBeat freelancer, writing features and reviews under Music Editor Mike Breen. His experiences in school and in our offices steered him away from his chosen path and into stand-up about eight years ago.

“I liked it, but I didn’t love it,” Hammond says of journalism. “I was like, ‘I just want to write jokes.’ I started going to open mics and I knew I could do this. It was hard but it was pretty fun, and I enjoyed it more than doing what you’re doing — interviewing people and writing. I was doing reviews and music writing, but when I ‘d write a review and I didn’t like it, it would be like a roast, and that was not what you’d want. So I was like, ‘I should just do comedy.’”

Deciding what he will perform on the night of the taping is a process that may well extend into the taping itself.

“I’ve got a bunch of jokes that could be on it, or I could do the special tomorrow and not use any of the jokes I’m working on,” Hammond says. “I’ll probably decide like a week before, then change my mind the night of the show, and halfway through my set, switch it up and go, ‘I’m gonna do this,’ because I’m dumb. It’s going to be fun and silly and a little dark, but it’s going to be good.”

“I’m not sure if I have a general genre of comedy I do,” Hammond continues. “It’s a little alt at times but I’m, at my core, a club comic. I try to incorporate every style though: one liners, stories, longer bits, short jokes. It helps break up the monotony for me and the audience.”

Hammond just returned from a quick tour of comedy clubs in the South, where he workshopped some of his new material. And he’s excited about the reopening of his home comedy club, Go Bananas in Montgomery. The Prime special would likely have been taped there, but the club was still shuttered due to COVID precautions during the planning phase, so the decision was made to do his sets at MOTR Pub.

“Go Bananas would have been the spot. It’s where I’m most comfortable, but outside of Go Bananas, MOTR is the best room in Cincinnati for comedy,” Hammond says. “It’s small and dank and there’s low ceilings (in the basement) and it feels kind of dingy and gross down there, but I like that. It’s like a punky Metal bar, and I’m into that feeling.”

“And people who go there are cool,” he continues. “They have a built-in audience, people who want to have fun and are open-minded. MOTR’s had a comedy night since before I started, so they have people that go just for that.”

Mirroring Cincinnati’s music scene, the city’s comedy community is extremely supportive and cooperative. Beyond simply raising his own profile, Hammond is intent on shining a light on the Queen City’s comedy talent with his Amazon Prime special.

“Our scene is getting some national attention now, which is crazy, and it feels good,” he says. “We’ve built it up and we have a lot of really good comics who didn’t leave for New York or L.A.”

Hammond has a sporadic restaurant job, which has become even more intermittent with his frequent regional tour jaunts. But he doesn’t mine that particular aspect of his life for material. He’ll occasionally overhear something at work that finds its way into a joke, but for the most part, they remain separate domains.

“It’s nice because it keeps me grounded to real world stuff,” Hammond says of his other job. “At the restaurant, I talk to people and hear what they think about what’s actually happening. It’s nice to talk to someone where it’s like, ‘Oh yeah, you’re a person,’ because these people are the audience. Besides, (national stand-up comic) Todd Barry told (local comedian) Geoff Tate and Tate told me, ‘Don’t let the audience know you do anything but comedy. You don’t want them to think you’re not professional.’ Even though most professionals have other jobs.”

Regardless of how his career is affected by the Amazon Prime special, Hammond’s goal is to remain an integral part of the Cincinnati comedy scene. He and comedian Jeremy Johnston currently co-host Just the Clip, a podcast they describe as “two fat guys on a couch talking shit.” The podcast is released every Wednesday.

With the reopening of Go Bananas, Hammond has resumed hosting an open-mic comedy workshop every Tuesday at 7 p.m., where comics can get feedback from other professionals on their nascent material. And he’ll continue to publicize his hometown and its burgeoning comedy scene.

“I opened for Patton Oswalt two years ago, right before the pandemic. He found me on Twitter and invited me to open for him,” Hammond says. “He was like, ‘You’re really great. You’re here in Cincinnati? I can’t believe you didn’t move.’ And I was like, ‘You don’t have to.’ It’ll take longer to get a bigger following, but I don’t mind.”

Follow Blake Hammond on Twitter at @bigradmachine for updates about his Amazon Prime special and its air date, as well as his other upcoming gigs.