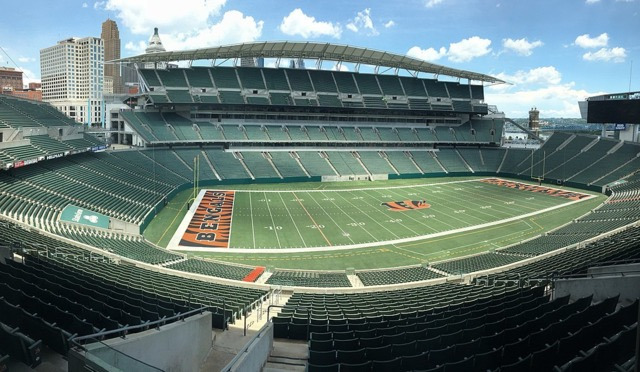 Cincinnati is one step closer in its quest to host at least one match of the 2026 FIFA World Cup.

On Tuesday, city officials pitched FIFA, the governing body for international soccer, on Cincinnati’s potential as a host city for one or more World Cup matches, primarily in the Bengals’ Paul Brown Stadium. The Queen City is among 17 U.S. cities vying for 10 host slots when Cup competition comes to North America in 2026.

Berding says that Tuesday’s meeting primarily focused on how to prepare Paul Brown Stadium for international soccer specifications, especially when it comes to the pitch. The game field in Paul Brown Stadium is synthetic turf, while FIFA regulations require natural grass.

In a Feb. 9 briefing with media, Berding quips that on the call “We might have talked about grass for a half-an-hour” and highlighted Cincinnati’s own sports turf experts, the Motz Group.

“I think it was fortunate that we could share that Cincinnati is the headquarters of the Motz Group, the world-renowned sports turf authority,” Berding says. “The grass system that's going to be at West End Stadium mirrors the requirements for FIFA, and our grass field has been put in at West End Stadium by Motz. We don't have to bring in any authorities from around the country with them right here in our backyard.

“They're well prepared to meet the FIFA specs on a grass pitch, as evidenced by what they've done for FC Cincinnati at West End Stadium,” Berding adds.

Berding believes that each of the 17 cities still in contention to host World Cup matches is putting forth an NFL stadium that must be reconfigured in some way to fit FIFA regulations. According to FIFA’s guide for bidding for the 2026 World Cup, host stadiums must have a seating capacity of at least 40,000 for quarter-final games, 60,000 for semi-finals and 80,000 for final matches.

Paul Brown Stadium in Cincinnati has a seating capacity of 65,515. FC Cincinnati’s West End Stadium’s capacity is around 26,000.

FIFA officials are conducting meetings and, when safe, site visits throughout 2021 with leaders from each of the cities warring for a World Cup hosting slot. For the first time in history, 48 teams will compete in the World Cup in contests held across North America.

Ultimately, hosting slots will go to 10 cities in the U.S., three in Canada and three in Mexico.

Berding likes Cincinnati’s chances at nabbing one of those slots.

“Ohio is the heart of it all. And if you look at the list of the 17 cities [in contention within the United States], we're about it in the Midwest,” Berding says. “There's no Chicago, there's no Indy, no Detroit, no Cleveland, there's no Columbus, no St. Louis. So we feel enormously well-positioned to win this thing.”

FIFA expects to announce its selections by the end of the year.